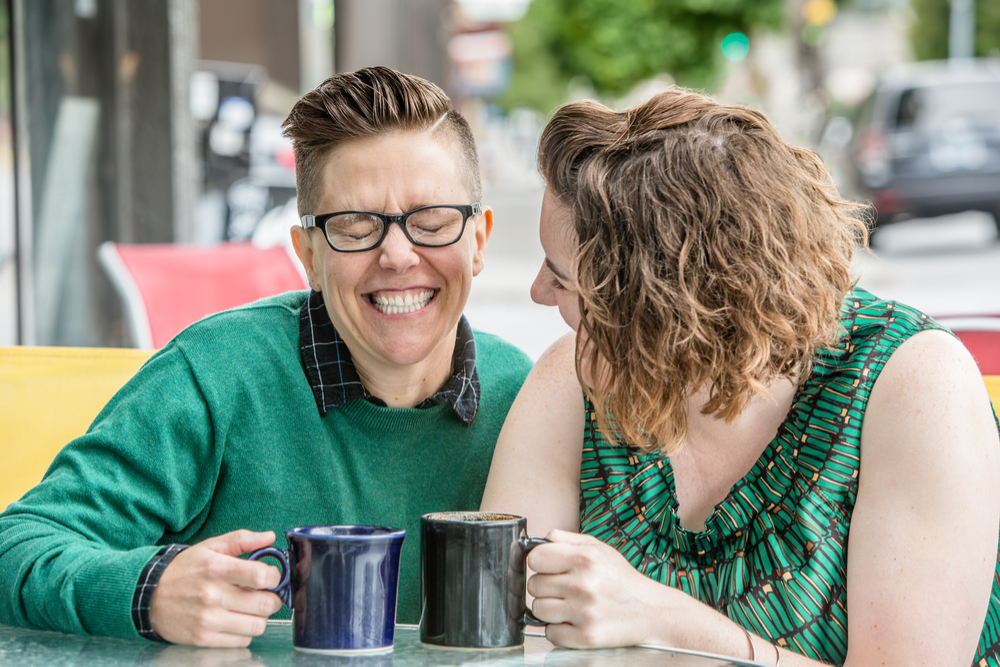 It was during a lesbian baby shower when I realized what I really wanted out of my love life and to accept what I had. My friends Audra and Jessie had roped me in on planning the shower; I had three kids and was once married to a man, so presumably I had insider information on how to throw a party that traditionally had reproducing-heterosexual-female overtones—or, as Audra put it, “You know all that girly shit.” She said that after I shot down the idea that a keg would be easier than a Bloody Mary bar for the shower. Although Audra was kidding, Jessie added it to a list of other misguided suggestions, all of which spelled out that we were three lesbians throwing a baby shower for a lesbian couple.

“Why not?” Audra asked. “How is that different from a Bloody Mary bar? It’s all booze.”

“We don’t need a Bloody Mary bar, either. I’ve never been to a baby shower with alcohol. The mother can’t drink.”

I couldn’t argue with that. We all were not only queer but also living in New Orleans, where there’s always a justifiable reason to have a cocktail before noon. When you threw in the rainbow-layered cake, the shower was already nontraditional, so why not?

And the truth was, I never really felt comfortable with all that girly shit, either, even though I had been happy through each of my pregnancies. It wasn’t the pregnancy that had made me feel out of place at my own baby shower. It was the room full of other girly girls who talked about girly-girl things. It felt much more natural to be sitting on patio furniture outside a bar with two tomboys . . . except when I brought up my kids.

Audra and Jessie were lifelong lesbians who had never wanted children. I could talk to to them about my kids, and they would listen and care, but it wouldn’t bring about the same banter as talking to another mom would. But then talking to other moms, who often were straight, would dead-end when they would start telling me about their husbands or ask me about my dating life. Most of the other parents I met were gay-friendly, but our conversations eventually led to questions such as, “What does gender-queer mean?” Or they’d tell me about random homosexual encounters they’d had either before or during their marriages that they determined didn’t make them “really gay.” All that is fine and good, but increasingly I found myself discussing the sexual details of strangers’ lives everywhere, even at marching band fundraisers.

This is what’s happened that I didn’t expect: in the eight years that I’ve been out, I haven’t dated much, but I’ve become the queer mom ambassador for both worlds.

When I split from my husband in 2009, the kids were six, eight, and 10. I was frantically trying to do three things: get a full-time job, make my kids feel stable and safe, and find gay people. The latter felt elusive to me. The kids and I lived in a conservative suburb of straight couples or Solo Moms with boyfriends who brought up homosexuals only when they were making fun of them. It was the same neighborhood I had been raised in and where I had always felt out of place. But it had been bearable when I was in denial about my sexuality. Now that I wasn’t, the truth about who I was stayed in the back of my mind every time I had a conversation with another parent. I didn’t have a girlfriend to keep secret, but I was becoming increasingly uncomfortable, even when the only woman I was hiding was myself. It was like wearing shoes that are just half a size too small—they feel manageable at first, but by the end of the day, you’re getting blisters and finding it impossible to walk.

Additionally, I had almost no self-confidence. So when my ex and I split, I was suddenly a gay, unemployed solo parent who felt as out of place in my community as an elephant on a dairy farm. I looked at other successful women and didn’t think I was as smart and talented as they were. I worried that I didn’t have what I needed to take care of my kids, work, run my household, pay the bills, and find a great girlfriend who would love me and the children. In fact, I thought a girlfriend was exactly what I needed—someone strong who could balance us out, someone who was better than me. But until I found her, I was going to have to do my best to create a stable, happy home for my kids.

The problem of making that my number-one priority (creating a stable, happy home) was that it didn’t leave me with much time to invest in another person. It seemed the way to meet women in the LGBTQ community involved bars, big parties, events that happened on school nights, and meetups on weekends that I couldn’t bring my kids to if I didn’t have a sitter. Even if I made it to an event, I wasn’t meeting other mothers, and often it was difficult to date a lifelong lesbian who really understood that my kids came first. They understood it in theory, but in practice they wanted a partner who wasn’t tied down. And who was I to blame them?

We moved from our small town to New Orleans, where I felt more comfortable being openly gay. Taking the kids from the place they’d grown up felt selfish, but I kept reminding myself that I wanted to teach them the importance of living genuinely and finding communities in which we felt safe doing so. As the kids got older, I got out more. I joined an LGBTQ softball league and made friends, began a career, and got into grad school. My kids’ generation was way more accepting than mine, and my middle daughter was telling her friends that her mom was gay because she said it made her cooler. My self-esteem improved, and I began to like myself.

But there was still one thing hanging over my head, and it hit me last fall on the day of the baby shower. I looked over at the expectant couple, Naomi and Emily, sitting on the couch. Emily had one arm slung behind Naomi’s shoulders. They were each talking to other people but were sitting hip to hip, so comfortable with each other, as Naomi rubbed her swollen belly in a tender way. When they’d met, Naomi had a son from a previous marriage, and Emily came into her life right away, assuming coparenting responsibilities quite naturally. Now they were having a baby, and their family would be four.

After seven years of awkward dating and failed relationships, I felt a surge of jealousy at how easily it seemed that Naomi had a great woman come into her life. She had exactly what I wanted: a partner who would make my family whole. Someone who could pick up my daughter from band practice while I took my son to a doctor’s appointment. Someone to talk to and figure things out with at the end of the day when the kids were asleep. Seven years into this Solo Mom gig, I was exhausted. I was tired of trying to figure out everything by myself, of days in which making everything work meant I had to be in four places at once, of moments when I felt lonely and not just sexually frustrated but really wanting a kiss. There is no battery-operated mechanism that can duplicate the deep, affectionate kiss of a warm-blooded human who is going through the shared drudgery of parenting.

Then something miraculous happened—my dream fell apart. At the moment I realized I still wanted to find not just a girlfriend but a coparent who would love me and my children, I also realized that it probably wasn’t going to happen, not while my kids were kids. My son was about to turn 14, and my daughters were 15 and 17. Even if I had met someone that day, it most likely would take time to get to know her before making a serious commitment and my kids would be that much older. It wasn’t the hope of meeting someone and falling in love that died in that moment. It was the dream I’d had that I would meet a woman who would want to be part of my family and raise my kids. I had never intended to raise them alone, or as I realized on my drive home from the shower, that they would be left in the hands of a mother who had to guess what the next right step was with every big decision and who had made so many mistakes.

When I accepted that I wasn’t going to be Naomi, that no one was coming to be part of my family, I pulled the car over and cried. I began to wonder why I had come out at all—just to be by myself and do what I perceived to be a crappy job providing for my kids?

So here’s what’s amazing about that epiphany: when I stopped crying, I drove home, walked through the door, and saw three teenaged children who were absolutely fine. They were silly, sweet, and genuinely themselves, the way people behave when they know they are loved. On the day I realized that I wasn’t going to get the girlfriend I wanted to complete my family, I also realized that I didn’t need anyone to complete my family. The dream I had of someone wasn’t even something I needed. We were loving, flawed, and doing just fine. Over the years, I had somehow managed to be in four places at once sometimes, and on the days when I couldn’t, the world hadn’t fallen apart. I had done the thing I had been sure I couldn’t do alone—I had created a safe, happy space for myself and my kids. And we were whole.

That realization changed my life. I’m now dating another wonderful Solo Mom, who also gets what it’s like to be the queer ambassador of both worlds. My relationship with her is comfortable and fun because I’m not expecting her to complete my family. We just enjoy each other’s company when we’re not both rushing around managing our respective households. And we both understand that you don’t have a keg at a baby shower.

Did you know we have a chat room just for LGBTQ Solo Moms? Join Sisters Only to meet moms who get it.