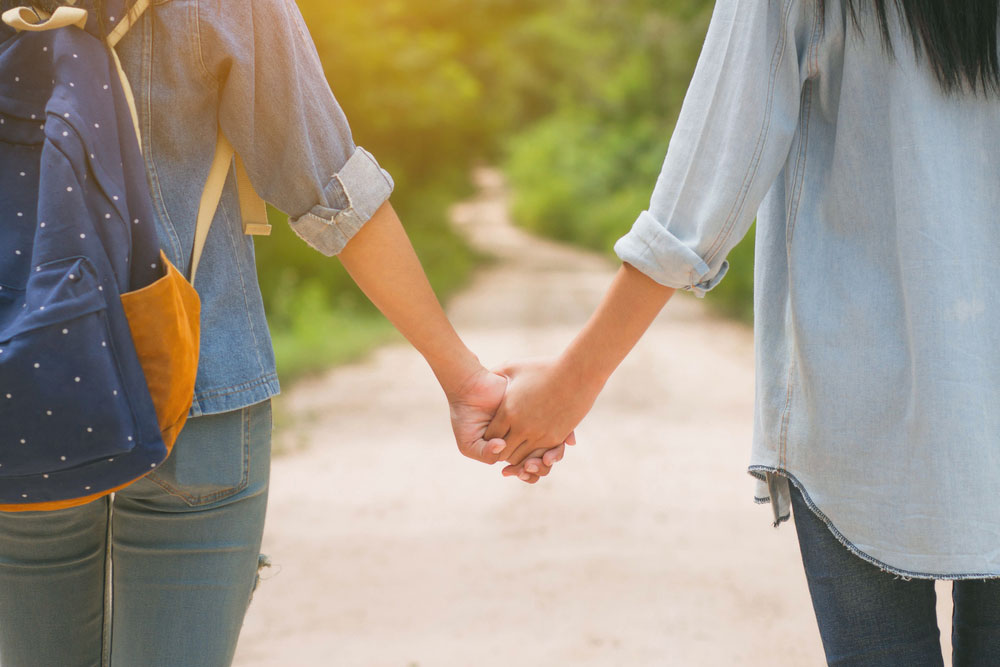 It can be hard to learn your child is LBGTQ+, even when you’re accepting

Your kid just came out to you as LGBTQ. But you’re a progressive solo parent. Maybe you’re even a member of the rainbow tribe yourself. At the very least, you support equal rights for all people. Actively. So, having your kid come out should be no big deal, right?

When offering support to people whose children or loved ones have recently come out, most LGBTQ organizations presume those seeking help are uninformed, scared, ashamed, confused, or angry. In other words: they assume newly minted parents of queers are heterosexist at best, homophobic at worst.

On the flip side, if you’re progressive or LGBTQ and your kid comes out, people assume it’s all peaches and roses in your heart and home. But even LGBTQ-positive parents can experience some ripples in their fabric when their kids start waving that rainbow flag. Maybe some of the scenarios described below apply to you.

Everyone knew except me

Katie, a Solo Mom of three children, had suspected her son was gay for years. She herself had explored a same-sex relationship after she divorced her son’s father, a fact her son knew. One day, neatening her son’s room, Katie found an issue of Out magazine. Why is he hiding this from me? Katie wondered. Doesn’t he trust me?

Katie’s not alone. LGBTQ kids often “practice” coming out with friends before family, even when they perceive their family as open-minded or supportive of LGBTQ people. Why is that?

Generally speaking, as preteens and teens, kids feel more comfortable unveiling identities to their peers, particularly those peers who can understand what it’s like to feel “different.” Sometimes kids need to work through their own discomforts before they feel ready to share the news with their parents. There’s just something about telling your parent that makes a reality so much more real.

For kids of solo parents, who often experience close parent-child bonds, coming out feels particularly vulnerable. In no way do they want to scare, upset, or disappoint their parent. Of course, on some level they know you’ll love them no matter what. But think of it this way: they know you’ll love them even if they fail a math test, yet they still feel pretty nervous about showing you that F, right? Rest assured, it’s likely their fears have nothing to do with the way you parent, with something you said, or with the quality of your relationship with your child.

Further, children hesitate to come out to their parents because they perceive that coming out will change things. And it does. First of all, the more people who know your child is LGBTQ, the less control they have over their own story. Second, unless you’ve been intentionally neutral in your assumptions about the gender of any future partner your child may have, your child may believe that his coming out will change your ideas about your child or his future. Third, coming out can open up a Pandora’s box of intimate conversations your child might not be ready to have—about her understanding of her sexuality, about his experience of homophobia, about the atmosphere at her school, etc. Finally, when a kid comes out, the whole family comes out. If you’re LGBTQ and out yourself, this may not be a factor for your child. But if you’re not, your child likely realizes that he’s bringing you along on this potentially bumpy road to personal freedom.

So when you look at it from a kid’s perspective, yeah, it makes sense that kids don’t often come out to their parents first, no matter how amazing their parents are.

I want an easier life for my kid

LGBTQ people have been living in the crosshairs of a civil-rights battle for decades. That fight isn’t ending anytime soon, not as long as socially conservative politicians continue to win votes by spewing transphobic and homophobic rhetoric and by introducing anti-LGBTQ+ legislation.

Sure, LGBTQ-rights advocates won marriage equality for the nation, and these days it seems every new TV show includes a regular LGBTQ character, but we’re still hearing about hate crimes targeting LGBTQ people on the news. Transgender people fear confrontation when walking into a public restroom, and in most parts of this country, same-sex couples think twice before holding hands in public.

We all want our children to feel safe and happy being themselves, right? And if you look closely, through a progressive lens, there’s a certain privilege wrapped up in this line of thinking. When we mourn the loss of our children’s presumed heterosexuality, what we’re really saying is, “I wanted my child to be able to wrap herself up in heterosexual privilege and not deal with these issues that affect other people.”

But if we’re truly progressive, aren’t we always hoping our kids pay attention to the injustices of the world and work to change them? Is it not better to help our kids grow the character, courage, and resilience it takes to be themselves and stand up for others than to wish “easy lives” on them?

Writer Susan Oren, a self-proclaimed “liberal, well-meaning mom,” felt her liberalism challenged by her son’s announcement that he was gay. “When cultural-sensitivity training had come into vogue, I’d eaten up the concept, rushing to every seminar, joining each committee,” Oren explains. “‘Tolerance’ and ‘acceptance’ were my mantras. I served on the diversity council at our neighborhood school and on the LGBT committee at work, and I’d posted a ‘No on 8’ sign in front of my house. So here was the ultimate test. Was I the real deal?” In a blazingly honest recollection of the night her son came out, Oren recalls thinking, “Why me? . . . Couldn’t someone else’s son be gay? I’d gladly help them learn to cope with it.”

Espousing progressive values because you choose to, that’s one thing—you have the privilege, at will, to turn on and off your engagement in social-justice actions. But when your kid comes out, the fight for LGBTQ rights becomes deeply personal. The homophobic comments your coworker makes—while you could ignore them before, now they will grind at you until you say something. That gay kid who got beat up at the amusement park—he’s no longer a stranger on the news; he’s now a stand-in for your kid.

This emotional upheaval can cause progressive parents—even parents who are LGBTQ themselves—to reevaluate their friendships, family relationships, and participation in community actions, and the way they advocate for children at school, on teams, and at extracurricular activities.

That’s OK. If, like Oren, you find yourself surprised by your own thoughts or suddenly aware of blind spots in your previous ways of thinking, be gentle with yourself. You’re learning. We’re all, always, learning.

Though much of the advice LGBTQ organizations offer to socially conservative parents may not apply to you, some advice stands true for progressive and LGBTQ solo parents: Coming out is an ongoing process; be kind to yourself; take the time to notice, feel, and understand your responses to your child’s announcement; and find a trusted someone to share with, a friend, family member, or therapist who will listen without judgment and support you as you grow into your family’s new reality. Meanwhile, love the heck out of your kid, and pat yourself on the back for raising a child who’s brave and bold enough to be who she is, no matter what other people think.

Join our LGBTQ+ Kids Tribe for more conversation and support!