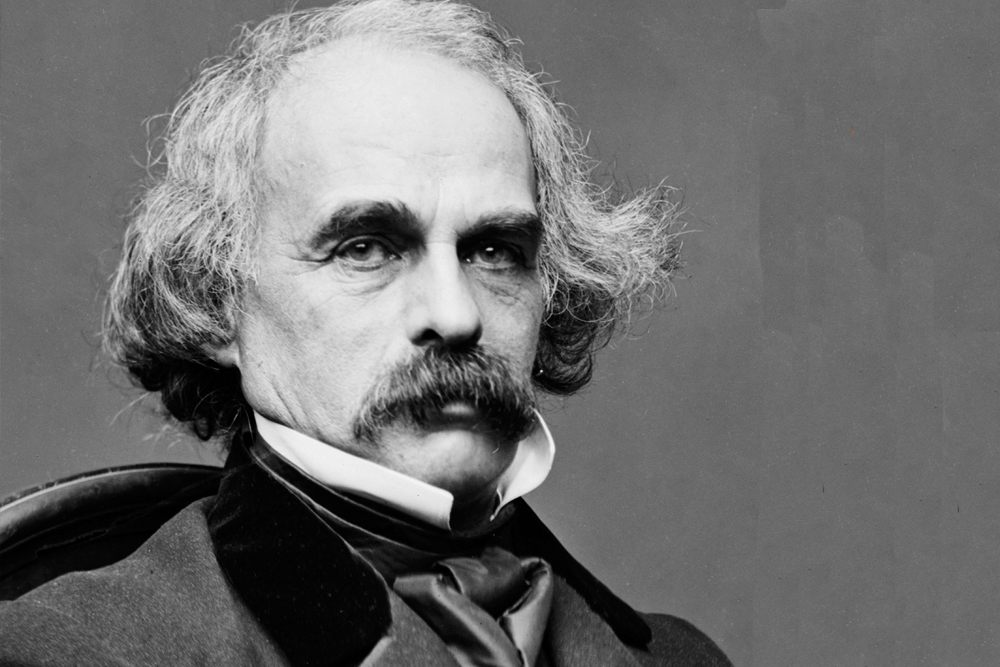 American novelist and short-story writer Nathaniel Hawthorne was three years old when he lost his father, a sea captain and member of the East India Marine Society, to yellow fever. The death took place off the coast of Suriname; back in Salem, Massachusetts, Hawthorne’s mother, the former Elizabeth Clarke Manning, was left to make decisions for her family as a Solo Mom. She moved with her children—Nathaniel and his two sisters—to the home of her relations one block away. There, Hawthorne shared a third-floor room with his maternal uncles; he spent much of his youth in this house, which he wryly referred to as “Castle Dismal.”

Indeed, the death of his father seemed to have hit Hawthorne hard. In 1813, he injured his leg while playing ball, and though doctors could find nothing specific wrong with him, a convalescence of several months followed. It was only after his mother and his uncle Robert intervened that Hawthorne left his bed and began using crutches to get about. Manning attributed her son’s eventual recovery to the “cold water cure” endorsed by a Dr. Smith of New Hampshire, but there were setbacks: at one point, Hawthorne relapsed and returned to his crutches. Some historians believe that the long convalescence was in part psychological, rooted in the loss of his father.

In any case, the recovery period proved to be a fruitful one for the budding author, who spent the time in bed reading voraciously and developing strong critical-thinking skills. After college, Hawthorne returned to his mother’s house, where he spent 12 more years of relative solitude. Though sometimes lonely, he honed his craft during this time: as he was to tell his fiancée, Sophia Peabody (who became his wife in 1842), “If ever I should have a biographer, he ought to make great mention of this chamber in my memoirs, because so much of my lonely youth was wasted here, and here my mind and character were formed.”

Part of Hawthorne’s self-definition involved distancing himself from his somewhat notorious ancestors. The author’s great-great-great-grandfather was one William Hathorne, a Puritan political dynamo infamous for his harsh sentencing. William’s son, John Hathorne, was one of the three judges involved in the Salem witch trials and the only one who did not later express remorse for his actions. Shortly after graduating from college, Hawthorne added the w to his name to hide his connection to these men.

His work reflected his complicated feelings about his forebears—and the animosity he felt toward the Puritan ethos in general. The Scarlet Letter, arguably Hawthorne’s masterpiece, is the story of two lovers who clash with Puritan moral strictures; some have argued that it is also a celebration of the inner world ruled by women, external repression notwithstanding. The House of the Seven Gables, a dark study of hereditary sin, draws from the legend of a curse leveled against Hawthorne’s own family by a woman condemned during the witchcraft trials.

Hawthorne’s mother died at 69, succumbing to a sudden, brief illness that took her son by surprise. Though accounts differ as to the relationship between Hawthorne and his Solo Mom—according to some reports, Manning never completely recovered from her husband’s death and withdrew from her children—at least one author, Mark Van Doren, refutes the negative claims. In his book, Nathaniel Hawthorne, Van Doren describes “an excellent cook, an attentive mother, and an interesting talker about things past and present.” Indeed, Hawthorne was reportedly beset with grief by the loss of his mother, becoming ill himself after her burial.

Shortly after he recovered, he began writing The Scarlet Letter. Did he have his Solo Mom in mind when he created the character of strong, convention-defying Hester Prynne? Ultimately, we can only guess.