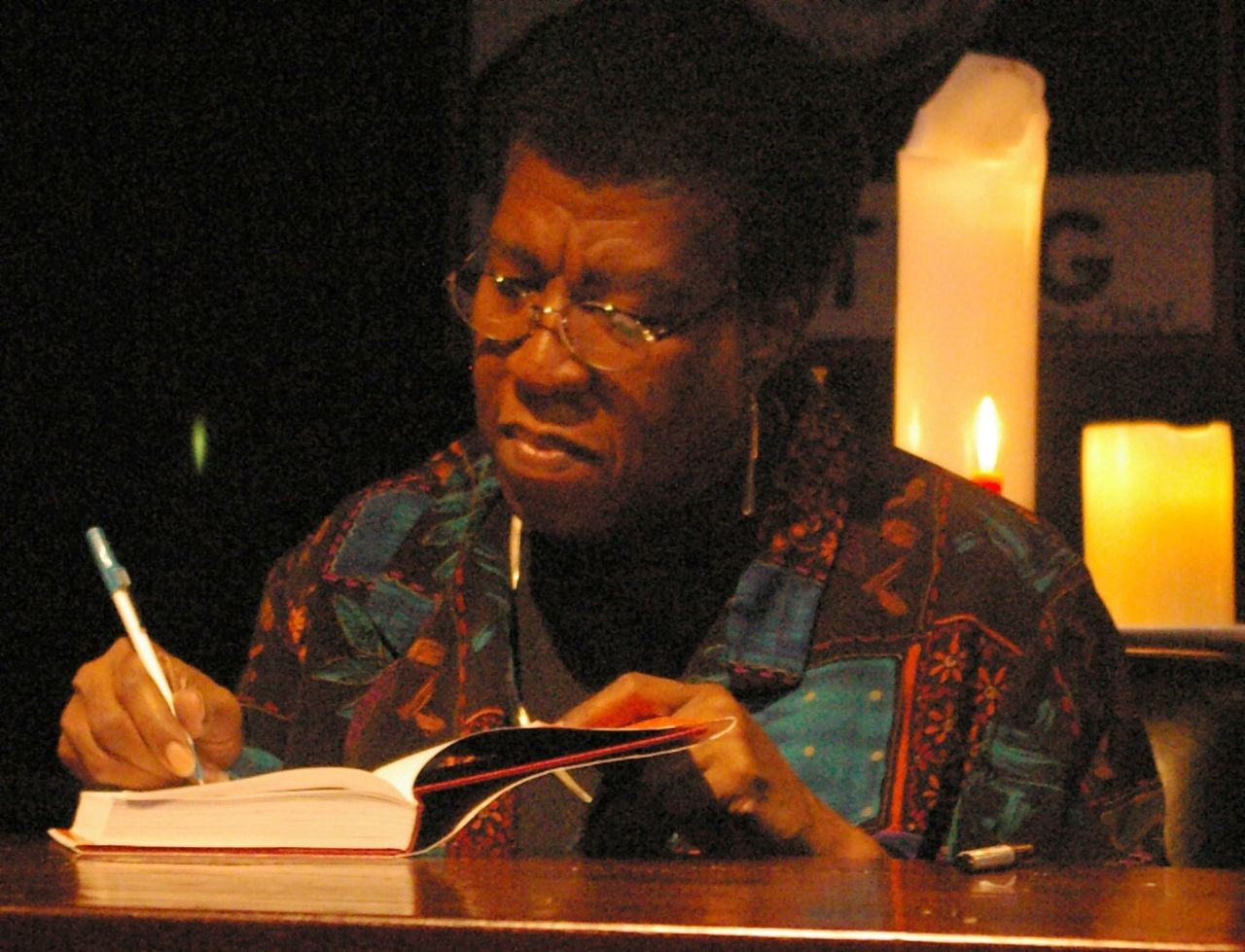 African American author Octavia E. Butler wrote science fiction with a keen eye. The creator of the Patternist series and Xenogenesis trilogy, as well as novels such as Kindred, Butler distinguished herself early on by writing black female protagonists into her work—an anomaly in an arena largely dominated by white male writers. Today, when dystopian fiction written decades ago has proven to be uncannily prescient, her smart, informed observations hold their own beside works such as George Orwell’s 1984 and Margaret Atwood’s The Handmaid’s Tale. Butler, the only child of a Solo Mom, died in 2006. But she created work that continues to have an impact—and reflects, sometimes frighteningly, the world we live in today.

Born in 1947 in Pasadena, California, Butler was the daughter of Octavia Guy, a housemaid, and Laurice Butler, a shoe shiner. Laurice died when Butler was seven, leaving Octavia the elder to raise her daughter as a Solo Mom with the help of her own mother, Butler’s maternal grandma. Sometimes Octavia would take her young daughter to work with her, and some of Butler’s earliest memories are of the degradations she saw her mom endure at work. What Butler witnessed deeply informed her worldview and the messages she sought to communicate in her writing. As she told In Motion Magazine in 2004:

“I got to see [my mom] not hearing insults and going in back doors, and even though I was a little kid, I realized it was humiliating. I knew something was wrong, it was unpleasant, it was bad. I remember saying to her a little later, at seven or eight, ‘I’ll never do what you do, what you do is terrible.’ And she just got this sad look on her face and didn’t say anything. I think it was the look and the memory of the indignities she endured. I just remembered that and wanted to convey that people who underwent all this were not cowards, were not people who were just too pathetic to protect themselves, but were heroes because they were using what they had to help their kids get a little further.”

Though Butler was dyslexic, she was undeterred in her love of writing. She started writing around the age of 10, after begging her mother to buy her a Remington typewriter, on which she “pecked stories two fingered.” As she told Black Scholar, it was a poorly written movie that inspired her to try her hand at science fiction. “[W]hen I was 12, I was watching a bad science fiction movie [Devil Girl from Mars] and decided that I could write a better story than that,” she said. “And I turned off the TV and proceeded to try, and I’ve been writing science fiction ever since.”

A deeply shy child, she spent much of her free time in the Pasadena Public Library, reading and writing in a pink notebook. By age 15, she had grown to be six feet tall; she stood out from her peers, and as she described in an essay for NPR, not always in a positive way: “[B]ecause I was an only child I was comfortable with adults, but shy and awkward with other kids. I was quiet, bookish, and in spite of my size, hopeless at sports. In short, I was different. And even in the earliest grades, I got pounded for it.”

All these experiences were to inform her work with a deep empathy. After graduating high school, Butler attended Pasadena City College, where she heard a classmate criticize previous black generations for what he called “subservience” to whites. Looking back on her Solo Mom’s strength, Butler was motivated to encourage empathy for—rather than judgment on—those who have endured the unimaginable. And she began work on her novel Kindred, in which a contemporary black woman travels back in time to the antebellum South. Butler has said, “They were fighting, they just weren’t fighting with fists, which is sometimes easy and pointless. The quick and dirty solution is often the one that’s most admired until you have to live with the results.”

By the mid-1980s, Butler began to receive critical recognition for her work, which not only explored fantasy but also continued to plumb real depths by addressing the human experience. In 1984 she won the Hugo Award for Best Short Story for “Speech Sounds”; that same year, her novelette “Bloodchild” won a Nebula Award. In 1995, she received a “genius” grant from the MacArthur Foundation, the first science-fiction writer to do so. The grant allowed her to buy a house for herself and her mother.

Today, Butler’s work is sometimes considered prophetic. In her Parable books, begun in 1989, she drew from the news to create a near-future dystopia in which societal collapse is predicated on factors such as climate change, gun violence, and late-stage capitalism. Butler wrote two books in that series and at one point envisioned four more. But ultimately she found the story “too depressing” and switched course to write what became her last book, Fledgling, a vampire novel that was published in 2005.

Butler died in 2006, when she hit her head in a fall that might have been caused by a stroke, but her relevance remains strong as ever. In 2010, she was posthumously inducted into the Science Fiction Hall of Fame. Eight years later, a mountain on Charon (one of Pluto’s moons) was named Butler Mons in her honor, and on June 22, 2018, what would have been her 71st birthday, Google featured Butler in a Google Doodle in the United States.

Whatever she might have made of the attention, there’s a good chance this shy daughter of a Solo Mom would be dismayed to learn the extent to which her science fiction, today, is described as augury. During her lifetime, she certainly resisted any description of her work as such. “This was a cautionary tale,” Butler said of her book Talents, during a speech she delivered at Massachusetts Institute of Technology, “although people have told me it was prophecy. All I have to say to that is: I certainly hope not.”

Millennials grew up listening to his reassuring voice on the PBS series ...