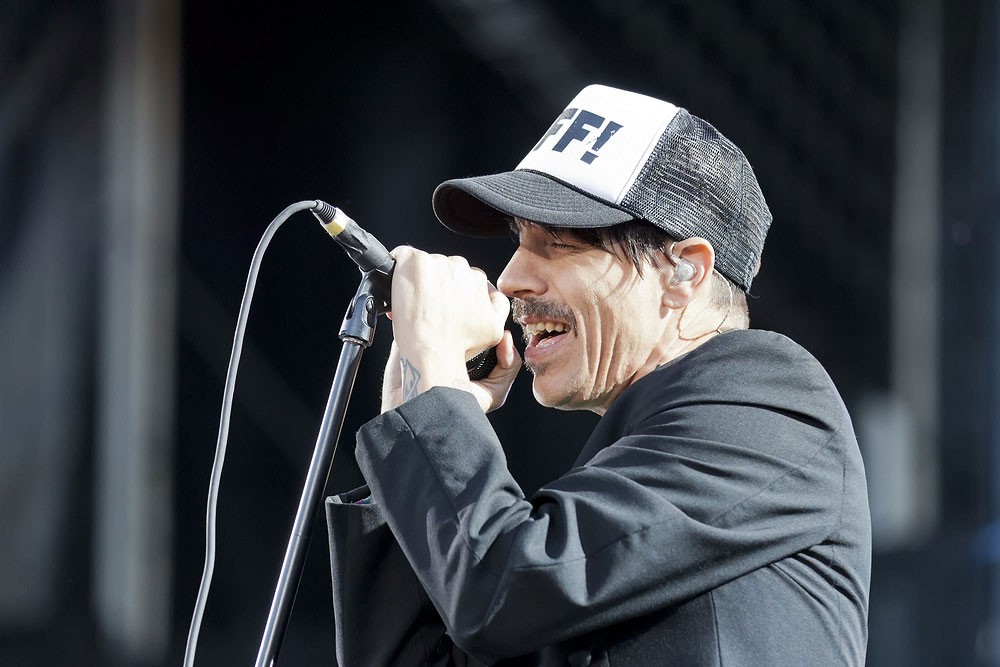 Rock and Roll Hall of Famer Anthony Kiedis has experienced much pain throughout his life, but he’s always found a way to turn that pain into art, both as a founding member of the Red Hot Chili Peppers and as the author of his 2004 memoir, Scar Tissue (Hachette Books, 2005). His Solo Mom has been a positive presence throughout his twists and turns.

Kiedis was born November 1, 1962, in Grand Rapids, Michigan. In 1966, his parents, John Michael Kiedis and Margaret “Peggy” Noble Idema, divorced. For the next several years, Kiedis’s Solo Mom raised him in the relative quiet of Grand Rapids, while his father lived in Hollywood, acting under the stage name Blackie Dammett. Kiedis was intrigued by the glamour of Hollywood—so much that in 1974, he decided to live with his father, a decision that would have a profound impact on his life.

In Hollywood, Kiedis developed an interest in music, especially live performance, and he met musical collaborators such as Flea and Hillel Slovak, with whom he would later found the Red Hot Chili Peppers. He would also land small parts in movies and television through his father. But Kiedis also began taking drugs at a young age, including cocaine and marijuana with his dad. In his teens, he tried heroin, too, leading to an addiction that would haunt him for years.

Kiedis lived recklessly. He and Flea were daredevils, leaping from buildings into swimming pools, which would lead to Kiedis breaking his back by accident, causing a lifetime of physical pain. He deepened his involvement with drugs. Remarkably, he graduated from high school with honors and enrolled at the University of California, Los Angeles. But he soon dropped out, his higher education a victim of his own drug abuse.

Fortunately, Kiedis never gave up on art. He wrote poems and collaborated with Flea and Slovak musically. It was in the mid-1980s that the trio formed the Red Hot Chili Peppers, a group that they hoped would fuse punk and funk. From the start, there was something different about the band. They successfully blended funk and punk but without the negative energy that was associated with the LA punk scene. They grew a reputation for outrageous performances, sometimes appearing naked except for tube socks that covered their genitals (a stunt they would repeat on the cover of Rolling Stone when they became famous).

The Red Hot Chili Peppers landed a record deal with EMI and began recording albums, but theirs was a rocky path. Kiedis was so deeply involved in drugs that in 1986 the band kicked him out. With the help of his Solo Mom, he cleaned up and rejoined the band, but it didn’t take long before he suffered a relapse, leading to internal dissension. And he was not the only drug user who paid a heavy price: in 1988, Slovak died of a heroin overdose.

Somehow the Red Hot Chili Peppers survived the tragedy. In fact, the band grew commercially and artistically, with their fourth album, Mother’s Milk, hitting Number 52 on the Billboard 200. The Red Hot Chili Peppers received the break of their lives when acclaimed producer Rick Rubin collaborated with them on their album Blood Sugar Sex Magik. Rubin, one of the most influential producers in music, helped the band diversify their sound. The punk/funk fusion remained, but the album also contained the poignant biographical song, “Under the Bridge,” based on a poem Kiedis wrote about his heroin addiction. Reportedly Rubin found the poem in Kiedis’s possessions and encouraged the band to turn the words into music. Rubin saw something that the band did not: an artistic breakthrough. Fortunately, they listened to him. The success of the song helped launch the group to global fame, and “Under the Bridge” endures as the band’s signature moment. Meanwhile, Blood Sugar Sex Magik, released in 1991, would go on to sell seven million copies in the United States.

The Red Hot Chili Peppers became both commercially successful and critically acclaimed from creating an energetic but brighter alternative to the rise of grunge rock and the one-band wrecking ball that was Guns N’ Roses. As critic Greg Prato of Allmusic.com would later write, “Creating an intoxicating new musical style by combining funk and punk rock together (with an explosive stage show to boot), the Chili Peppers spawned a slew of imitators in their wake, but still managed to be the leaders of the pack by the dawn of the 21st century.”

It would be nice to say that the band lived happily ever after, but with the pressures of fame came more drug abuse and dysfunction. The band was also tarnished by events out of their control: in 1999, the Red Hot Chili Peppers appeared at the infamous Woodstock ’99 music festival, which was marred by violence and destruction. Although the Red Hot Chili Peppers had nothing to do with the mayhem, the band became associated with the infamy.

The Red Hot Chili Peppers managed to record several albums into the 2000s, diversifying their sound and building a fan base through works such as Stadium Arcadium. Kiedis took time to write his memoir, Scar Tissue, in which he laid bare his drug addictions. He would later express both regret and satisfaction about writing the book—regret that he revealed details that hurt people in his life, but satisfaction that the book became an inspiration for people struggling with drugs.

Kiedis says that he’s been clean since 2000, and for the past several years, he has continued to grow as an artist and endure as a testimony to the power of survival and overcoming addiction. He has suffered physical ailments unrelated to drugs, such as recurring foot pain caused by an onstage accident. But he has not let pain stop him. In 2012, the Red Hot Chili Peppers were inducted into the Rock and Roll Hall of Fame. When the band was inducted, he acknowledged the radically different influences of his Solo Mom and father in his induction speech:

I have a very wild father and a very mild mother, and they both made me who I am. I’d like to thank my father for introducing me to the arts—for inspiring me to be a free thinker. . . . And although my mother was much more sort of mild and laid back about the whole thing, I realized years later . . . she taught me the lessons of what it is to suit up and show up and go to work every day and the gratification that comes with it. Thank you, Mom and Dad—I love you both.

Kiedis continues to show up and go to work. The Red Hot Chili Peppers are as strong as ever.