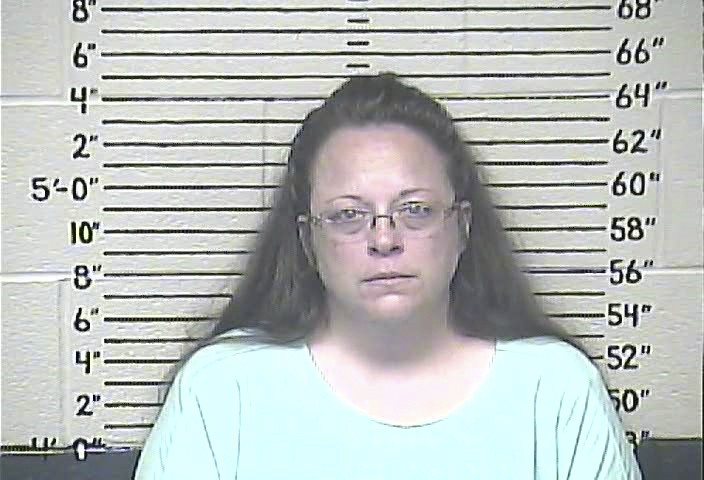 Religious freedom is our right; religious refusal is a violation of our rights

If you haven’t heard of Kim Davis, the county clerk in Rowan, Kentucky who violated federal law by refusing to issue marriage licenses to same-sex couples, either you’ve been vacationing on Mars or you’re a Solo Mom too busy to glance at the newsfeed on her computer. Either way, it’s time to pay attention. Kim Davis’s vigilantism is rooted in a religious freedom argument that’s dangerous to all of us, especially Solo Moms.

What’s up with Kim Davis?

In her own words, Davis justifies her refusal of service to same-sex couples: “I love my Lord and must be obedient to Him and to the Word of God.” Despite her sworn duty to uphold the laws of her county, Davis refused “to issue a marriage license which conflicts with God’s definition of marriage,” and she insisted that her deputy clerks, regardless of their beliefs, follow her lead. She claims her actions were “a matter of religious liberty.”

What does religious freedom really mean?

Of course, religious freedom is a cherished right in the United States. Our country’s founding documents grant us the freedom to practice the religion of our choice by attending services in a church, mosque, temple, synagogue, or the sacred outdoors; by wearing our religious clothing; and by praying to our deities and practicing our traditional rituals.

Further, our founding documents enforce a separation between church and state. As residents of the United States, we get to choose whether or not we want to abide by the rules of a religion; however, we must all abide by the laws of the local, state, and federal government.

Based on an article by Rev. Emily C. Heath, this chart illustrates the difference between religious freedom and religious imposition:

The chart illustrates how, in what is ultimately a slick marketing move, the religious right has co-opted and redefined the phrase “religious freedom.” Under this freedom flag, conservatives have mounted a political campaign to overturn recent LGBTQ civil rights gains and to thwart social efforts to embrace diversity, including diversity in sexual orientation, gender identity, and family structure.

How could this impact Solo Moms?

Meanwhile, lawmakers across the nation have passed so-called “religious freedom bills,” and they continue to propose similar bills in state and federal legislatures, fueling the growing trend of religious refusals and undermining the basic civil rights of many groups, including Solo Moms.

While most media coverage of these religious refusal bills focuses on the ways in which these bills threaten to erode the hard-won rights of LGBTQ people, in a recent editorial The New York Times acknowledged that Solo Moms could also feel the burn. Calling attention to the dubiously named the First Amendment Defense Act recently proposed in Congress, the article said:

“As critics of the bill quickly pointed out, the measure’s broad language—which also protects those who believe that ‘sexual relations are properly reserved to’ heterosexual marriages alone—would permit discrimination against anyone who has sexual relations outside such a marriage. That would appear to include women who have children outside of marriage, a class generally protected by federal law.”

If such laws pass, they could provide a legal loophole for private business owners, health-care providers, government officials like Davis, and others to block a Solo Mom’s access to health coverage, education, housing, adoption, and all manner of services, simply because the Solo Mom’s family was not created in the image of that person’s religion.

What can we do about it?

Ready to take action? You can find out more about the First Amendment Defense Act and contact your congressional representatives to tell them how you feel.

But your congressional representatives aren’t the only influencers in the realm of social policy. Talk to your friends, your family, your coworkers—anyone who votes. Open up conversations about the very real dangers of these religious refusal bills and the personal impact such policies could have on your life and theirs. As the LGBTQ rights movement has taught us, sharing personal stories with the people you encounter every day is the surest way to open people’s hearts and minds and to engage them in the fight to protect civil rights for all, including Solo Moms.