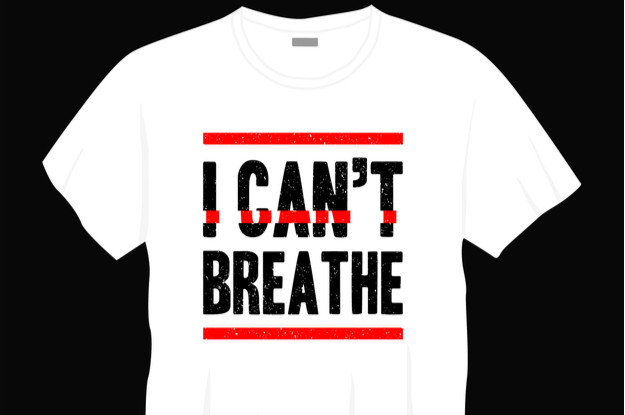 A t-shirt with the words I Can’t Breathe, is painfully handed down from one son to the next.

Earlier this summer, my youngest son and I decided to attend one of the recent protests planned in response to the horrific murders of George Floyd, Breonna Taylor, and countless others at the hands of the police. “I need a T-shirt,” he told me. Understandably, he wanted suitable attire—something that expressed his anger and frustration. He wanted people to know what he felt and where he stood just by looking at him.

In typical teenage boy fashion, this request was made within days of the event, leaving our ability to meet the demand questionable. We immediately searched for and found a Black-owned company that offered a T-shirt with the message he wanted. Equally important, all proceeds supported the Black Lives Matter movement. Unfortunately, but not surprisingly, the shirt would not arrive in time for the demonstration. My son was disappointed.

As he searched for another shirt to wear, I remembered that I purchased one for my older son when Eric Garner, another unarmed black man, died at the hands of the police. That was six years ago. The shirt bore the three words that Garner whispered in his final moments, the same words George Floyd uttered six years later when a policeman pressed his knee on Mr. Floyd’s neck: “I Can’t Breathe.” I thought it would be perfect for my younger son, if I could find it.

I started looking through the hand-me-down bins, as I have countless times before for other items. Over the years, those bins have been a huge money-saver for my family and a blessing to others. Digging through the pile was always a walk down memory lane, as I recalled when one item or another was worn or purchased. I remembered when I bought the shirt for my older son six years ago. I remembered his frustration and despair at the death of Eric Garner.

I remembered that I could not offer him any real words of consolation. Not for Eric Garner. Not for Trayvon Martin. Not for Tamir Rice or any of the other murdered Black men, women, and children killed so mercilessly by those sworn to protect. He had wanted a T-shirt, too. He wanted some outward expression of the inward confusion and pain he was experiencing at the realization that he was considered expendable and a threat—not a teenage boy. The same feelings his younger brother was now facing head on, some six years later. The fact that the same T-shirt with the same message was still relevant after so much time filled me with overwhelming sadness until I stopped digging and started weeping into the bins of clothes.

I thought of everything that happened and all that had not happened during the six years since I bought that shirt. Six years of watching videos of unarmed Black men and women die at the hands of the police. Six years of mothers losing sons and daughters, children losing fathers and mothers, communities being robbed of the unknown promise and potential of so many futures. Six plus over four hundred years of fear and frustration.

The words on the T-shirt I just ordered were the same ones Eric Garner whispered in New York six years ago and now resonated anew in a tragically familiar context. We had marched before. We protested before. We stood against police tyranny before. Six years later, we were still dying. When would it end?

“When will they stop killing us?” my older son wanted to know. He couldn’t imagine a world in which Black lives actually mattered because he had never experienced it. What he has seen, what we have all witnessed over and over again, is the blatant disregard and willful destruction of the lives of so many people who looked like him and his brother, his father and his uncles.

My younger son only had a vague recollection of the murder of Eric Garner, but he will never forget George Floyd. No matter how much he may want to erase the horrific image of Mr. Floyd’s face smashed against the blacktop and the death-knell knee of the smirking police officer. He will never forget watching him die on that video, and neither will I. Neither will any of us.

We went to the protest without a coveted T-shirt. The one we ordered didn’t arrive in time, and I never found the one I’d bought before. The protest was socially distant and powerful. My son said he had “a lot to digest.” We have been processing ever since.

I still don’t have many words of comfort or consolation, even after six years. I just hope this time will be different. I hope this time the words turned to action will lead to lasting change. I hope the senseless killing of Black men, women, and children at the hands of the police will cease. I hope we will dismantle systemic racism once and for all. I hope that my sons will eventually feel safe in their own country and in their own skin. I hope that, one day, Black lives will finally, fully, and completely matter. And I hope that in another six years, I will not be searching for the T-shirt I just bought my younger son for someone else to wear to a protest or march because we still can’t breathe.

Sharisse Kimbro is a writer, speaker, and Solo Mom of two. Her debut novel, Beyond the Broken, is available on Amazon and at Barnes & Noble.