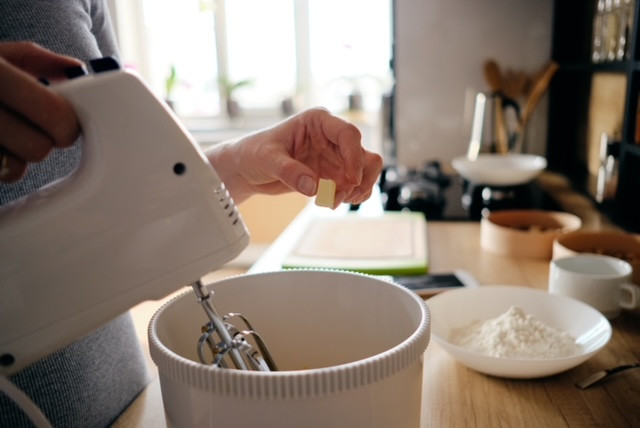 When getting in the holiday spirit bites back.

The recipe calls for very cold butter. You are now a mom who makes chocolate chip cookies from recipes texted to you by other moms who swear they look and taste exactly like cookies from a trendy bakery you would never go to, because frankly, you’ve never been a baked-goods kind of person. But here you are.

2020 is not an easy time for anybody, you are reminded constantly. You know it. It is just you and your quirky, social daughter, whom you chose to have by yourself. Her ninth birthday party was held on zoom, you fear her tenth will be as well.

You preheat the oven. You crack the eggs, measure the sugar and the vanilla, and mix them together. Then you add the very cold butter.

The butter won’t soften. You try a fork and a potato masher. You have an emulsifier you never used to make smoothies you never drank. You take it out of the box.

You attach the blade, sharp as a machete, covered in a metal dome. You plug in the emulsifier. The oven beeps.

You place the emulsifier into the bowl and squeeze “pulse.” It works!

You are a fun mom making cookies for dinner during a pandemic!

The blade jams. You press and release the pulse button hoping to dislodge the sugar and vanilla and egg and cold butter.

You can hear your daughter Zooming her speech therapy.

The session will end soon and she will need dinner.

The emulsifier is still on when you insert your finger to scoop out the half-frozen batter. The blade loosens itself and starts to spin.

At first your only focus is on the blade that has corkscrewed into the flesh of the top joint of your pointer finger. You have never seen, except on Grey’s Anatomy, what flesh looks like next to bone. It doesn’t start to hurt until you have to unspiral your finger out of the blade.

When you look up, there is a Jackson Pollock painting of blood and sugar and eggs that covers your entire kitchen. The blood is extra red against the white subway tile.

With your working hand, you wrap the damaged one several times in a paper towel and shove the roll under your arm. You one-handedly pick up your phone and dial Lori, a mom in your building.

She’s at the playground across from Urgent Care which is six blocks away. She will take your daughter. A plan!

You call to the other room and tell your daughter to get off Zoom, grab a mask and her iPad. The kitchen is a crime scene.

She screams down the elevator, through the lobby, and up Sixth Avenue. Daylight Savings was last week and the city is dark. The street lights start to halo.

Somehow you get to Urgent Care and, it being the Tuesday before the Tuesday before Thanksgiving, there’s a line around the block. It is cold and dark and your daughter is screaming. You push past the line and now you are also being screamed at by a block’s worth of New Yorkers and the front desk staff until they look down at the red lake at your feet.

You are not sure if any one who works in urgent care actually knows anything about medicine. People in white jackets come in, look at your makeshift paper-towel hand bandage, and quickly leave. Someone has been told to mop up the blood pooling on the floor of the tiny exam room.

Your phone is ringing frantically – it’s your sister, your father, your cousin’s husband who lives with your cousin a five minute walk away from you. You have barely heard from any of them since March. They are all taking a great interest in your daughter’s whereabouts, who is safely eating pizza with your neighbor and his son. No one has dared to open the paper towel, so you have no news about your finger. They hang up.

Finally, it is decided you need the hospital.

It would take you less than seven minutes to walk to the hospital but they insist on an ambulance which six months later you will learn costs twelve hundred dollars that you must pay because you haven’t met your deductible.

Now you are too embarrassed to take a selfie.

She escorts you through the sliding glass doors and says her goodbyes.

The resident manning the ER looks at your finger and calls the surgeon who looks at it and calls the plastic surgeon, who finally calls in a hand specialist. She is Addison Montgomery if Addison Montgomery had a dyed-black bob and was five feet tall. She is in a body-con dress, high heels, full makeup as if pulled away from a gallery opening. You have not put on a bra in nine months.

Your daughter calls. Can she buy the thirty-dollar Disney movie you have refused to download?

Addison Montgomery examines your finger. She gently pulls open the jagged triangles of skin and lays them onto a piece of gauze. She inspects the pulverized flesh and moves it aside to look at the bone. You were, she says, very lucky. Another millimeter and you would have cut the tendon. The flesh is gazpacho and the skin is as frayed as a hula skirt. She begins to sew.

Being something of a master quilter, you compliment Addison Montgomery on her tiny, even stitches.

Addison Montgomery compliments your ability to not flinch and asks if you would like another Novocain injection.

“I did two years of fertility treatments, this is nothing,” you explain while your fatherless daughter is in your bed watching a thirty-dollar movie.

“Good for you,” You have heard some version of that countless times before. Compliments on your bravery when, in reality, your fear of being alone drove you to the sperm bank.

“I wanted to do that but they told me surgeons couldn’t be single mothers. Isn’t that mean?” Addison Montgomery finishes sewing. You ask her to count the 31 stitches because, in the retelling, it will be the first thing people ask. She has a bag full of colorful bandages and you select the hot pink roll for your daughter.

On social media the next morning you describe your near-death-cookie-making accident requiring 31 stitches. The world’s most expensive chocolate chip cookies are delivered almost immediately from your friend who texted you the recipe. Friends who have not called since the pandemic callto hear the story - more texts, more calls, and more cookies.

Beneath the surface, your pulverized finger cannot get wet or sustain any pressure and there’s no way you can make a Thanksgiving meal for your daughter. You can’t open a takeout container much less clean up your kitchen.

But over FaceTime, your fuchsia bandage doesn’t look like much more than a child’s boo-boo.