Katharine Donato, an Expert in Immigration, Shares with ESME 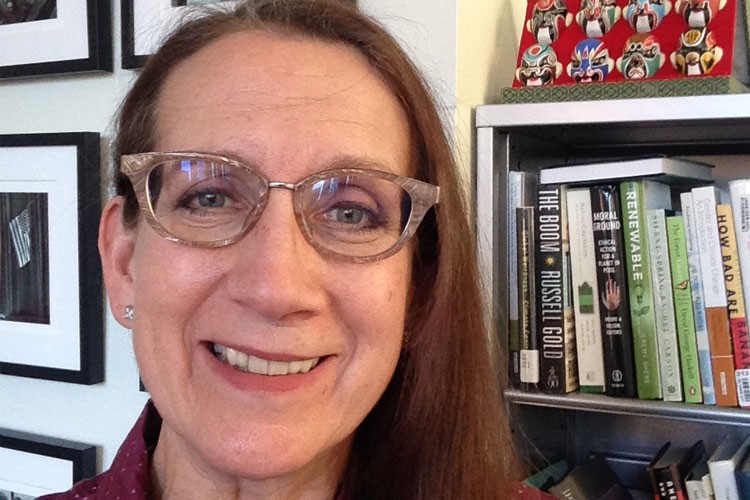 New York native Katharine Donato has held many jobs across the United States during her academic career. Eleven years ago, she landed in Nashville, Tennessee, as Vanderbilt University’s professor of sociology—and has recently added ESME to her résumé as our new Immigration Resource Guide.

Her new book, Gender and International Migration: From the Slavery Era to the Global Age (Russell Sage Foundation, 2015), with coauthor Donna Gabaccia, examines the reported “feminization” of migration to the United States. It is believed this is because of an increase in female migrants and global awareness of issues such as human trafficking, etc., but by evaluating historical evidence, Donato affirms that women have been a primary part of migration flows for centuries.

And while driven and committed to her career and academia, her true passion in life is being a mother to her two daughters.

Q: Are your girls still living at home with you?

A: My oldest, Marlo, is graduating from Boston University this year, and my second, Stella, is graduating high school. Stella is on the autism spectrum. I recently wrote a piece about her called “Beyoncé Dance.”

Q: Tell me about your new pieces.

A: I’ve been writing about my daughter, Stella, for many years. My hope is that I’ll publish a book. So far, I’ve only written narratives of things that happen that actually make you laugh. I understand every possible challenge a kid on the spectrum could introduce into my life, and my family’s life. I’m tired of reading books that only talk about these challenges. I’m interested in writing about the enormous pleasures you get if you hang around one of these kids or young adults. They are very funny. They make you laugh. Sometimes you’re laughing in hindsight at a difficult situation, but sometimes you’re laughing in the moment. I want to build an audience beyond those with children on the spectrum.

Q: Where did you get the idea for this approach?

A: I started with the premise that we people with normal brains don’t have a way of laughing with people who have developmental disabilities, so we shy away from it. The best comedians we know we can laugh at and with. But we have no idea what to do with people who have mental disabilities. Some are extremely funny in a very deliberate way, while others are quirky and funny because it’s who they are. We can’t discover this because of political correctness. For example, my daughter, upon seeing an Amish family at the airport, yelled out, “Mom, it’s the Pilgrims!” It was hilarious, but people didn’t know if they were allowed to laugh.

Q: Tell me about “Beyoncé Dance.” It’s a great title.

A: “Beyoncé Dance” was a short piece I wrote after taking Stella to her first concert, Beyoncé, here in Nashville. Before the concert, there were all sorts of promotional booths set up by the radio stations, etc. Stella wanted to do it all—she loves that stuff. One mobile booth had a very long line, so we waited. An hour and a half later the line inched up, and we could see there was a wall of screens with Beyoncé dancing her Pepsi commercial. The gimmick was that a person would go up on stage and had to mimic Beyoncé’s dance. If you look good enough, you win prizes. All these young women were thinking they would be the next Beyoncé. Finally, it was Stella’s turn, and the guy with a clipboard asked her age. She said she was 16, and he said, “Sorry, you’re too young.” Now, if you have a kid on the spectrum, and with that sort of buildup, you never do that. I got in his face, “There’s no way in hell we’re leaving this place. She’s dancing!”

She got a standing ovation. They brought her the prizes. And he told me the clip will be posted on YouTube. So I wrote the story. In the long run, I’m hoping that people loosen up a bit.

A: I teach and do research on issues related to immigration and migration—global as well as US focused.

Q: How did you land in this field?

A: I came from parents who had no idea what an academic did. I went through various fields before I finally applied for a PhD program. I studied for an MBA. I got an MSW and helped set up a shelter for domestic-violence victims. Then, a year later, I applied for the PhD program. I had never taken a sociology class, but the main adviser for my MSW was someone with a PhD in sociology. My thesis was about understanding domestic violence—not as an individualistic experience but as behavior that operates in a larger context, the sociological context. I came in with an interest in immigration. It worked for me.

Q: Who is the audience for your new book?

A: It’s an academic book [in which] we try to make a simple point but need to do it with a lot of data and detail to convince the scholars and policy people.

The point being that in the last couple of decades, all the big papers have reported in various ways that there are more women among immigrants to the US. We looked at any data we could find, and although it showed there were some migrations that were heavily male, and there may have been times in different countries when immigrants were more heavily male, largely there have been far more women who were active migrants—going back 400 to 500 years. It’s taken that long to discover this, across all disciplines.

We also look at consequences, at least in the US, of having a gender-balanced migration. With the general population, we embrace gender balance. But with regard to immigration, we tend to demonize it. It becomes political. So we examine some of the consequences of immigrant gender balance and only see minor and reasonable consequences—ones that, frankly, seem good.

A: I was married 24 years. We broke up about six years ago. Our marriage fell apart. Shit happened. Both of my children had health issues, which was additional stress. And there was infidelity on his part. I always thought marriage was about something deeper than what we had.

Q: How did your new status of being a Solo Mom change your life?

A: Once I got through the emotional trauma, I realized I had more time—for my children and myself. I’m certainly calmer. No matter how hectic life gets, it’s never as hectic as it was when I was trying to also take care of him. There’s a certain kind of peace, though I wouldn’t describe my life as peaceful. It has its stresses. I’m not wealthy, but I have a good job, so I’m lucky. We lost a lot of money with the divorce, and with children, that’s very scary. I feel like I’m never going to retire. I’ll always be working. But divorce has given me the time to reinvent the wheel: Who am I as a person? Who am I as a mother? Who am I as a professional?

Q: Did you notice a shift in your community?

A: I’m not sure if people acted differently toward me or if they continued to do the same thing, which was always having married couples to their homes. Suddenly I wasn’t in that group anymore; as a result, I have a quiet life. It’s lonely. It takes a little getting used to. When my ex has my younger daughter, I’m all of a sudden having breakfast, lunch, and dinner with only me; but over time, I’ve realized this is also precious time. When else would I have the time to take a three-hour nap in the middle of the afternoon? There is some power to the loneliness that is beneficial.

A: So many . . . When my older child in college was diagnosed with her illness . . . When my younger one has major tantrums. Once, in a grocery store, Stella had a massive meltdown and bit me. As a Solo Mom, it’s these moments that are hard to manage in public that are so upsetting—that make you feel alone. For me especially, the defining moment was when I realized there was nobody I could call who would really get it, except for him. And that’s no longer an option.

If I feel really bad or depressed over something that happened, I’ll put myself in my bed and literally put my head under the covers until I feel I can get up again.

A: I’m proud that we made it through the trauma. I’m proud of the resilience I now see in my children. I always knew I had it, but I didn’t realize they had it. Whatever I did in raising them, I know I gave them this resilience, so if, God forbid, something happened to me, I know they’ll be OK.

A: Whenever you feel you are on the edge, take a step backwards. Literally. Close your eyes and breathe deeply for 30 seconds.

Read more about Katharine in her monthly Sister Note.