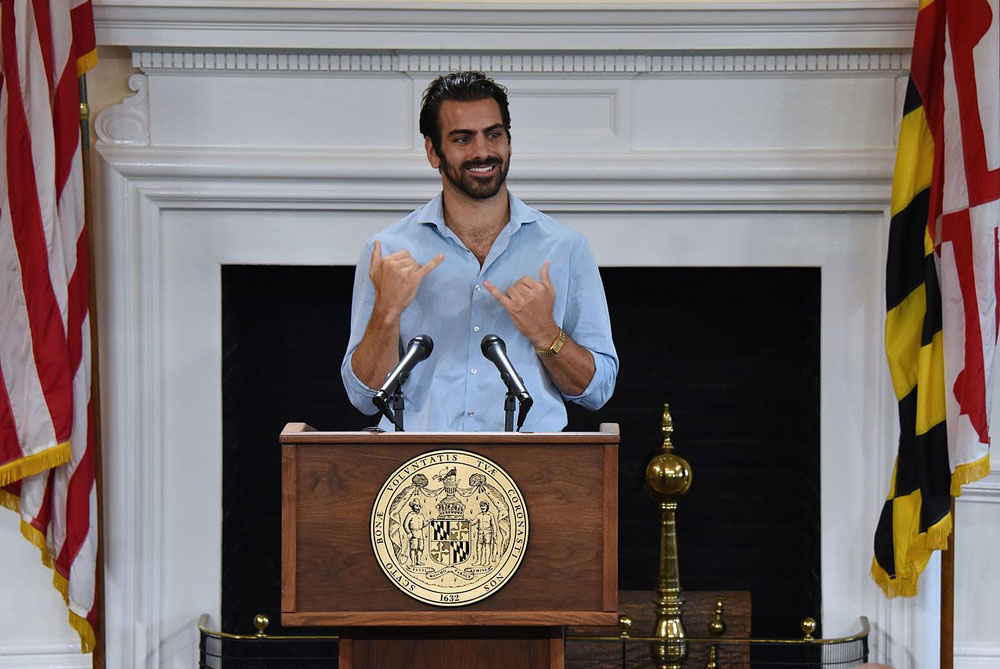 Don’t waste your time feeling bad for Nyle DiMarco. Born deaf in 1989, the model, actor, and deaf activist has never felt limited by the fact that he cannot hear. As he told People magazine in 2016, “I’ve never wanted to hear. That’s never existed in my life. I’m happy!” Mom Donna, who raised Nyle and his two brothers as a Solo Mom, is also deaf; so are Nyle’s brothers, his dad, grandparents, and great-grandparents. “Growing up, I was always involved in the Deaf community,” DiMarco said. As a child, he played with hearing kids—participating in sports and riding bikes—but he attended a school for the deaf, a choice Donna presumably had a say in, and which positively influenced her son’s worldview.

“If I’d been born into a hearing family and went to a public school, I would have probably felt much more isolated, and being deaf would have become my identity,” DiMarco shared. “Since I knew my deaf identity since birth, it wasn’t hard for me to be comfortable, confident, and independent in a hearing world.” That confidence has manifested itself in his career, which includes wins on the shows America’s Next Top Model (he is to date the only deaf contestant on that show and the second male to win) and Dancing with the Stars, in which he was partnered with professional ballroom dancer Peta Murgatroyd.

DiMarco burst into tears when he won the coveted Dancing with the Stars Mirror Ball Trophy in 2016, and Donna, who was right there watching from the sidelines, soon followed suit. As the proud Solo Mom told Entertainment Tonight after the show, “When he breaks down, it’s so easy for [me] to break down. I just joined in on the emotion, and the emotional journey he was going through. He really deserves this.”

After his win, DiMarco celebrated the victory via Instagram, sharing a picture that he dedicated to the “70 million Deaf people in the world!” He views his celebrity as an opportunity to bring awareness to Deaf culture, and is proud to offer inspiration and encouragement to others. As he told US Weekly, “[My experience on Dancing with the Stars] means that barriers can be broken. Even though there are barriers there, it doesn’t mean that they can’t be broken. You’ve just got to work twice as hard and set your goals and break those barriers. Opportunities are endless.” He carries his genuine, positive worldview out into the world: DiMarco has given inspirational presentations at schools for the deaf, and part of what he embodies is a true gratitude for his personal experience: he told MTV in 2015, “I love my world quiet.”

DiMarco—who is also a spokesperson for LEAD-K (Language Equality & Acquisition for Deaf Kids), and signs and collaborates on The ASL App, an app that teaches conversational American Sign Language—takes all his responsibilities seriously. But perhaps his legacy will ultimately be The Nyle DiMarco Foundation, a nonprofit dedicated to providing more access to resources for deaf children and their families. “I’m improving deaf children’s lives and I’m involved in the Deaf community,” he told People. “It’s what I’ve always dreamed about doing.”