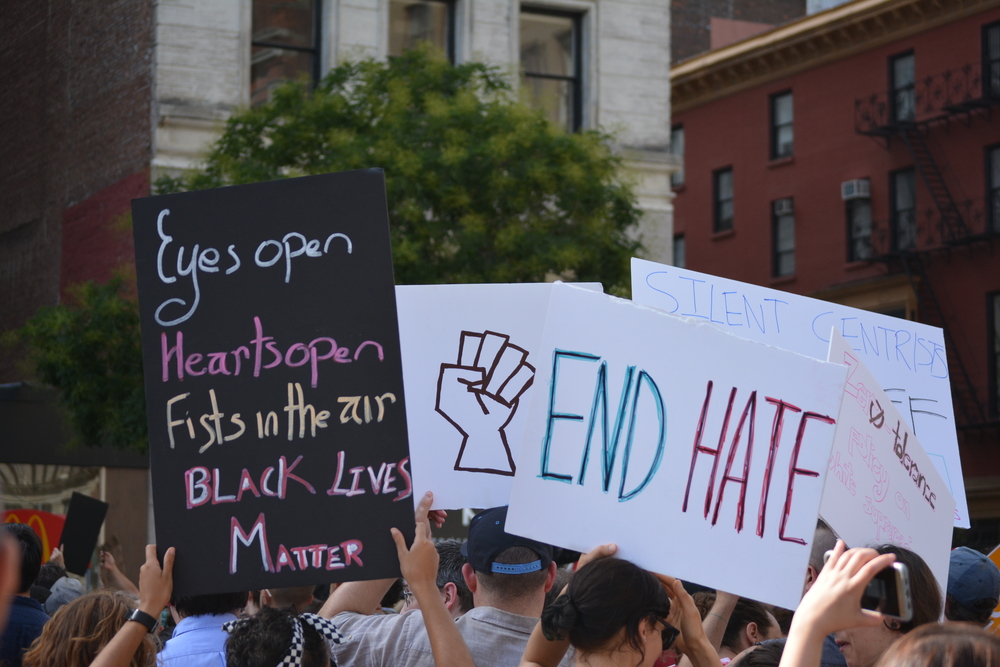 Thoughts from a mother in the wake of Charlottesville

My son is black. I was married to a black man for 22 years. My extended family is a rich mix of races, ethnicities, gender identities, religions, and sexual preferences. And I’m Jewish. So, I guess I’m hitting all the major points that would target me and my loved ones as objectionable in the eyes of the torch-bearing, swastika-waving, gun-toting marchers who came out in full force in Charlottesville, Virginia.

So yes, I’m shocked/not shocked. I’m frightened and sad and angry. I’m frightened that so many white people still believe in the myth of white supremacy, a story that has been concocted and perpetuated by the cynics in power to help divide and conquer the multitudes and keep us in a state of relative deprivation as we fight among ourselves for scraps, when so much of the wealth is concentrated in the hands of so few. The myth of domestic white supremacy dehumanizes everyone who doesn’t fit into a narrow mold of who is American and therefore worthy of living. Because that’s what we’re talking about, right? This extreme us-versus-them mentality dictates that there’s only room in this town for one of us, and the other one is leaving in a body bag.

I have a hard time dealing with what feels like mindless fury in person. It’s really easy to mirror anger with equal amounts of anger, match rage with outrage. Going back again to my parenting experience, modeling patience and empathy for my son when he is behaving in ways that I find objectionable is one of the hardest things I have to do as a Solo Mom. I don’t always get it right. And on those occasions when I lose control and let myself be carried away by my anger and frustration, I invariably feel sad and regretful afterwards, as though I’ve fed an evil beast. To me, being a good parent is the ultimate Zen exercise, and I feel like the same mindfulness is required when dealing with people who disagree with us about basic political and social matters; otherwise, we feed into a cycle of hostility from which there is no escape. It becomes an endlessly angry hall of mirrors. The thought of it makes my head and heart hurt.

So how do we channel the righteous anger we feel about historical injustices? Clearly, many people feel angry for what seem like justified reasons to them. But as I always tell my son, we may not be able to control what we feel, but we do have a choice as to how we act on those feelings. And I know there is a difference between hate groups and social-justice groups. Despite inflammatory statements by President Trump and other right-wing Republican leaders such as North Carolina State Senator Dan Bishop, I know that Black Lives Matter (BLM) isn’t a hate group. There is a difference between calling for the uplifting and rights of one group and advocating for the destruction of another. BLM as a movement is not about hating or destroying white people. The Ku Klux Klan, neo-Nazis, white nationalists, well . . . despite what they might like to say in their press releases, history has shown what they are about: lynchings, concentration camps, torture, and mass killings. BLM is about ending racial targeting of black people for police killings; brutality; and other violent, dehumanizing, or otherwise discriminatory treatment. I am totally with that.

As for the emboldening of these hate groups from the nation’s top leadership, I’m really not sure how to proceed. Some would say that we need to meet them head-on, but I don’t think that’s the only approach. At heart, I’m kind of a peace-loving hippie, and frankly, I’m not keen on physical confrontation, particularly with armed and angry mobs. I’m a mom, a poet, a writer, a lover—not a hater. I believe in the power of music and art to heal. I stand by my ability to be empathetic and sensitive to people’s emotions and needs, and to try and focus on points of agreement rather than blow up our differences. I know that great things are possible when we meet each other as human beings, one-on-one. I believe that deep down inside, we’re not really that different from one another. We want to be seen and heard, and respected. We want to be loved and appreciated. We want to protect our families, give our kids a good life, and be able to shine and live our lives in peace.

The power of hatred and anger to flourish is strong, particularly in an environment where so much of the planet’s resources are concentrated in the hands of a very greedy few. Let’s face it: most of the disagreements that turn ugly and violent have their roots in competition for basic resources, and the associated fear of their lack. I do believe there is enough planet, enough water, enough food, enough of everything to go around. If we could be free to live out our best selves and have our basic needs met, human beings would present a very different face to one another. But history has shown that greed and the battle for power have ruled society and the development of culture for millennia, and so the fighting continues.

And yet I wonder if we are hitting some sort of tipping point. Perhaps Trump’s over-the-top behavior is so egregious, so outrageous, that it will serve to unite previously disparate groups around a common opposition to him, his incompetence as a leader, and his words and actions that violate the very basic tenets of democracy and human decency.

I persist in my belief in the power of love. My desire to disentangle myself and my son from the reactionary, generational web of trauma, the grip of epigenetic memory, drives me forward with optimism and good humor despite the awfulness that seems to be growing all around us. And, yes, I am frightened—terrified, in fact—by the force of hatred and fury that I see increasingly played out around the world as a kind of virus, or a malevolent spirit, jumping from person to person, like the demon in the 1998 thriller Fallen.

I’m a mother. My job, as I see it, is to raise my son into the kind of man who will disrupt this destructive cycle and make a positive contribution to the world, as he fulfills his greatest potential as a human being. I love him as deeply as one person can love another, but I know my history. I know of the sacrifices made by our great social-justice defenders and human-rights leaders. At the age of 14, my son is on the cusp of manhood at a time when the world may demand of him—of us all—sacrifices of the highest order. I find the thought heart-stopping. We can see what is possible when our children take a stand for what they believe is right. My heart aches for the parents of Heather Heyer, who was murdered in Charlottesville this past week.

As we each grapple with the harsh implications of our current reality, my desire is that every one of us finds a place in the struggle that matches our own capabilities and our temperaments. Some of us will be marching in the streets. Some of us will get directly involved in the political system to try and change it from within. Some of us will be praying or meditating for peace. Some of us will be creating art and music, writing words of inspiration or healing, encouraging others to also share their thoughts and feelings. And hopefully we’ll all be going about the business of making the kind of world we want to see, moment by moment, in every interaction we have during our days, with every other human being who crosses our path, offering an example to our children of how they can create a more loving future.

Do you have an opinion to share or story to tell? We want to hear from you! Submit it to Perspectives and contribute to the chorus of Solo Mom Voices.