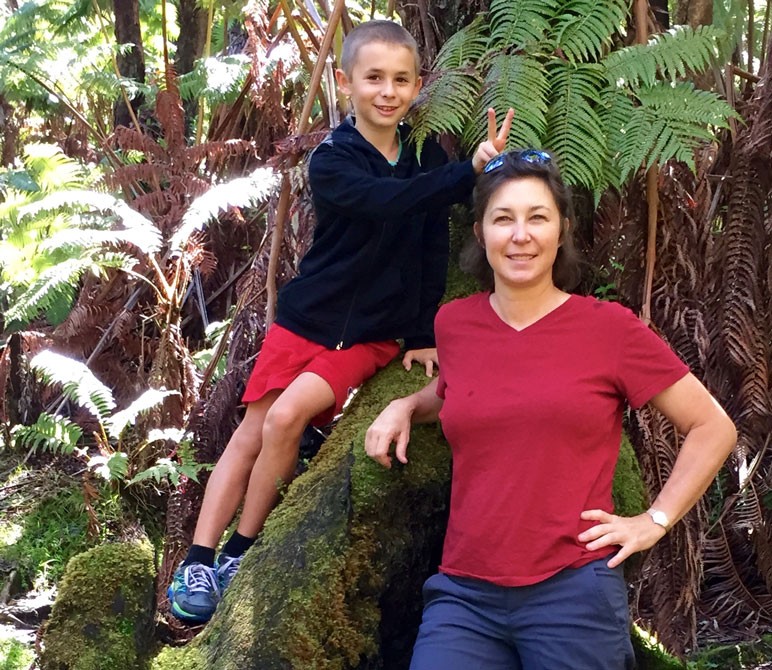 An interview with Solo Mom and screenwriter for Cold Case, Las Vegas, and more

Kim Newton is at the top of her game in television writing (The X-Files, The Fugitive, Cold Case, Las Vegas), a domain traditionally viewed as an old boys’ network by the entertainment industry. Factor in that Newton is also a Solo Mom to nine-year-old Oscar, and you’ve got one kick-ass dame. In fact, Newton was hosting a playdate while ESME’s Kathleen Laccinole interviewed her.

What do you do?

I write and produce one-hour dramas for television.

How did you get into the industry?

Initially I was an advertising copywriter for J. Walter Thompson in Dallas. My brother, a cardiologist in Los Angeles, told me, “When you’re in your 20s, you take chances. You don’t have that luxury later. Surf’s up. Why don’t you come out and be a movie writer?”

He had a patient that taught screenwriting at UCLA who sent me some scripts. And I thought, OK. I’m going to LA to take some classes at UCLA and stay with my brother. My first PA (production assistant) job was on Picket Fences. I worked my way up to writer’s assistant, then was a researcher for Chicago Hope. I ended up writing a spec script for Chicago Hope that got made. I got some offers, and The X-Files was my first writing job.

When and how did you become a Solo Mom?

I was in my mid-30s and had lots of friends having babies, but I wasn’t necessarily ready to have a child, so I decided to have my fertility checked. The doctor pointed out that fertility drops at 37. I wanted to reserve the option to have children and not make the decision because I was running out of time—so I decided to freeze embryos. I left them there for five years. Every time I drove past the building where they were stored, I’d wave at my baby.

I was waiting for the right job with security and supportive coworkers. When I turned 40, I was working on the show Las Vegas. I had a great boss who loved kids and was a dad himself. Ironically, I was surrounded by men (coworkers) and found it was the perfect time to have a baby. I said, “Let’s do it!” I don’t think for a second that women are more tolerant of women with children.

Did being a single mom impact your career?

It’s hard to ever know for sure why you didn’t get a job. [Being a single mom] changed it. Your priorities change. You become more about having a rounded life. I had to become more efficient. There were times when it was harder for me to contribute. I was on a show where we were behind, so they started working weekends, and I just couldn’t do it.

How did you manage when your son came?

Right off I had a baby nurse. I didn’t know anything about kids, so I needed someone to teach me. The baby nurse found the nanny whom I still have. [Solo Moms with no outside help] who have to handle it all—I think they are the heroes. I don’t know how they do it.

A lot of my relationships shifted from my being single and able to go out to . . . not. Party friends go away. Sometimes you aren’t included in things. Mom hangs with the mom; dad wants to hang with the dad, so sometimes I felt excluded from that. And I’m gay, so there’s that, too.

Is there a community of gay Solo Moms?

Was there a defining moment that drove home you were raising a child alone?

Anytime anything was bad!

When you’re really sick, it sucks. Your friends and their kids won’t come over because they don’t want to catch it. When [my son] was a baby, I was real afraid of him. I had postpartum depression and thought, Wow. I’m alone. That’s when being with somebody would have been great.

What are you most proud of as a Solo Mom?

Whatever I might say is going to sound like something that should be embroidered on a pillow. Single parenting can feel like you are in a war. It never gets turned off. Now that he’s nine, I feel like I’ve done nine tours in Afghanistan. I’m also proud of the intimate relationship I have with my son. It’s the two of us against the world.

Can you recommend any resources for women trying to break into screenwriting?

My advice wouldn’t be any different for a single mom than it would be for any mom: if you want to be a writer, the trick is to write. Join writing groups. Get people together, and read each other’s work and give each other notes. If you have talent, the big thing at the end of the day is your ability to take notes and listen. The toughest thing as a new writer is to be vulnerable and willing to change your work and improve it.

Not clever, but true: put a bed in your baby’s nursery. You can read on it, snuggle on it, sleep there when the baby is sick. This way, they will not focus on getting into your bed, and you preserve your room as a sanctuary—because you’ll need it!