Parenting in the Age of Social Media Turns to “Sharenting” 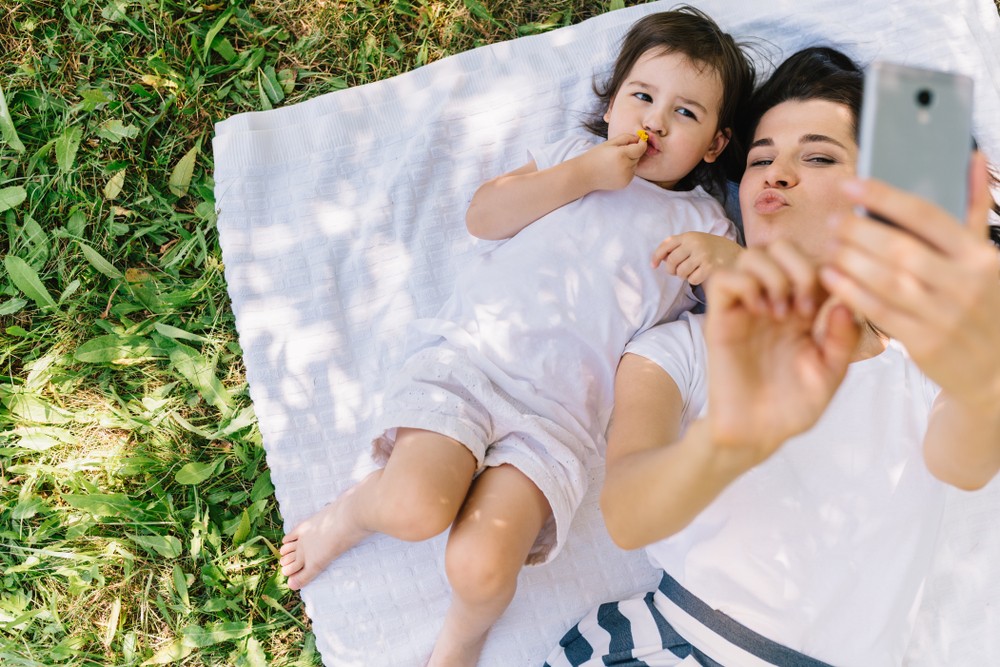 What kind of digital identity are you creating for your child?

Oh my gosh, I can’t wait to post this, I thought to myself.

My five-year-old son had just launched himself into our 50-something-degree swimming pool a few days after Christmas. He had been begging to go swimming for days. Finally, tired of the whining and pleading and bargaining, I dared him to strip down to his underwear and jump in.

My phone was recording him on video as he hemmed and hawed before he threw himself into the shallow end of the pool. He came up screaming from the cold and went flying back into the house, dripping pool water everywhere. I was proud of my kid for rising to the challenge and thought his reaction was worthy of America’s Funniest Home Videos.

But . . . he was in his underwear. That video wouldn’t be going on social media.

I post a lot of pictures and videos of my son on Facebook, which is set to private. My family and friends are scattered to the four corners of the country and across the globe, and it’s the best way I’ve found for us all to stay connected.

Social media has long since become our generation’s version of our parents’ accordion of wallet photos—except photos of our kids are blasted on the internet rather than tucked away in a back pocket.

But I have my own set of personal social media rules:

Even with those rules I’ve set for myself, I am guilty of “sharenting,” a term studied by attorney Stacey Steinberg, associate director of the Center on Children and Families at the University of Florida, Levin College of Law.

Sharenting, according to a report she wrote in 2016, is online sharing about parenting, and how parents now shape their children’s digital identity.

Sharenting isn’t a bad thing, Steinberg has said, if it’s done with your child’s best interests in mind.

What does that look like to Steinberg? Make sure you follow your children’s cues if they don’t want something posted to social media. Don’t post information that could come back to haunt them when they are teenagers or young adults. And be aware of who has access to pictures of your child.

“I think parents need to be aware that while they might see a picture to be an innocent picture of their adorable child, that there are people who might have sinister motives and might see that differently,” Steinberg told Here & Now, “and so parents should avoid posting any pictures of their kids in any state of undress.”

Louisiana mom of two Cassie Seal is shutting down her Facebook page this month, a combination of meme fatigue and frustration from feeling photos of her sons aren’t safe there anymore.

She used to post pictures of her five-year-old and seven-year-old but stopped after a friend of her father’s—a woman Seal had never met—took one of her son’s pictures from Seal’s father’s page and shared it on her own page.

Seal said she messaged the woman asking her to take down the photo, but she never heard back.

That’s not to say she’s swearing off social media entirely. Seal, who is expecting her third son, has an Instagram account and will share pictures of the kids there with a select group of friends and family.

“I can completely control who’s on there,” she said of her preference for Instagram. You can’t really save anything without screenshotting it. I know everybody that follows me. And I know everybody on Facebook, but when they share my stuff, it’s out of my hands.”

Lindsey, a Brooklyn mom who didn’t want us to use her last name, made the decision to not post any pictures on social media of her one-year-old daughter, Lou.

At one point, Lindsey was a social media regular, using the various platforms mostly to keep up with her friends’ lives. She’s largely backed away from posting even about her own life after Facebook was accused of selling users’ personal data.

She’s not knocking people who do post about their children online, even if it goes against her own personal “sharenting” rules.

“I firmly believe that everyone should do what feels right to them,” she said. “I share pictures the old-fashioned way, through texts and holiday cards. I’m doing my best to keep her digital footprint small.”

On the opposite end of the sharenting spectrum is Pennsylvania mom of two Jamie Beth Cohen.

“Aside from publishing Social Security numbers, addresses, and phone numbers, I don’t hold much back,” she said. “The one thing I’m careful to do is to use their first initials only. I feel like this is some protection for searches when they’re older.”

Privacy doesn’t exist as much now in the age of social media, she theorized, and posting her kids online is creating a kind of digital memory book for the entire family.

“When I had my first child, I was living across the country from my whole family and most of my friends. As a writer, keeping a blog was fun and easy, and my family and friends appreciated the updates and pictures,” she said. “As my daughter got older and we had a second kid, blogging was harder and posting on Facebook was easier, so that’s what I like about it.”

Her children are now six and nine, and they are starting to share with her their opinions regarding what they want—and don’t want—going on Facebook, which Cohen honors.

“I do worry I share too much and they might be mad about it later; but for now, my kids love to look back on the Facebook memory feature with me each morning, and we laugh at the old pictures and videos and things they’ve said that I’ve posted,” she said, “so I think they understand that this is helping create a record for them as much as it is sharing in the moment for me.”

Barbie Tallent, a mom of four from North Carolina, not only has embraced sharenting but also has created a YouTube channel “to share all the craziness that goes along with parenting twins as well as parenting four kids.”

“I have embraced social media as it has been created,” she said. “For us, it is a way to share and connect with our family and friends, especially with those that do not live nearby.”

Her oldest, 15-year-old Zoey, just got permission to have her own social media accounts with parental supervision.

“I love that it’s easy to feel connected to others. I don’t have to spend hours on the phone catching up with each family member or friend,” she said. “They can look and read about occurrences on their time.”

Plus, she said, parenting can be funny! And she wants to share that with others who can relate.

Even with her public social media presence, Tallent keeps her own sharenting rules, just like the other moms.

“I don’t post where we are while we are in public places so no extra worrying necessary,” she said.

And she’s also making a conscious effort to capture her favorite family moments and then put her phone away for the time being.

“While I may snap a picture or a video of my kids,” she said, “it’s usually much later after the event that I actually share it so I can be more present with my children.

Are you guilty of oversharenting? What rules do you stick to when posting about your kids?