From Twenty-Two Years of Spousal Abuse to Author and Activist 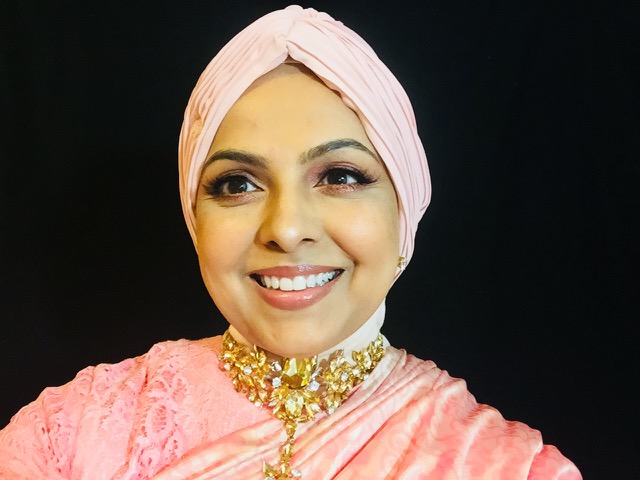 In learning to help herself, Fatima Omar Khamissa realized she had a gift for helping others

After enduring years in an abusive marriage, Fatima Omar Khamissa one day got the courage to leave. Ten years later, Khamissa is the founder of Spiritual Biz Moms and a best-selling author. She lives in Toronto with her five children and recently spoke to ESME’s Jaimie Seaton about the day she decided to take her power back, how she was treated in her Muslim community, and her extraordinary journey from survivor to activist and entrepreneur.

Q: Tell me a little about your background and how you became a Solo Mom.

A: I was in a violent, abusive relationship, and I knew within the first month of my marriage that I had made the biggest mistake of my life. Before my marriage, my dad sat down with me and said he thought I should reconsider, but I told him I was in love. After my dad gave me time to really think about my decision, he gave me the wedding of a lifetime. We had 2,000 people and 10 days of celebrations; I arrived in a horse and carriage. In the first few weeks, when I realized I’d made a mistake, I was so full of shame; what was I going to say to my dad? I adopted the attitude that I made my bed and I was going to lie in it. I stayed [in the marriage for] 22 years. I waited for my parents to die, and they knew nothing about the violence.

Q: Was your husband violent for 22 years?

A: Let’s talk about violence. Of the eight categories of violence, I experienced all except physical hitting. There was financial abuse, neglect and isolation, plus emotional, psychological, and sexual violence. If I come right into your face and tell you you are worthless and you are an effen bitch over and over again, there is an impact. I would go shopping with the kids, and he waited for me at the front door. While I was out, he was tracking my movements on the online-banking page, and when I returned, he asked me where I was. If I missed one stop, he said I was lying. I had to deal with that while I raised my children and supported him in his business. Most women I speak with who have gone through this have anxiety and suicidal thoughts. I actually spent a bit of time volunteering at a prison for women, and they all have gone through abuse; it’s like you don’t know yourself. You don’t know who you really are because every day is about being on the defense.

Q: How did you finally leave?

A: In the month leading up to my leaving, people asked how I had been responsible for the situation, and I got angry and defensive. It finally clicked, and I had to ask myself how I had been responsible, even as a victim. One morning I decided I was done. I had given up everything, including my university education, to support this man and raise my children. I had nothing, but I had faith.

On the day I [left him], I was in my million-dollar home, and my oldest was home from university for the summer. I took my other kids to an amusement park, and I talked to them about the pattern of violence they had witnessed. I understood that I was teaching my boys how to treat women and teaching my daughter how to be treated. I told my kids that one day I was going to tell them we were leaving and they would have to pack a small bag and be ready.

That night I was making pasta for dinner and my husband was angry, and he said to me that he would leave. For the first time in my marriage, I stood up to him. I said, “Today it’s my turn to leave.” I finished cooking the pasta, waited until we were almost done eating, and then told my kids that I was leaving and not coming back. I have four boys and one girl. My daughter asked if they had a choice and I said, “You always have choices.” My husband banged the table and said, “You never give women and children choices.” My daughter chose me; she was eight at the time. All my boys, one by one, said, “I choose you.”

We had 10 minutes to get out; my little one was four. I was a different woman—I had no fear. Then I thought, Where do I go? Because of the isolation my husband had created, I didn’t have friends to go to. We went to a hotel, and I called the police. By the second day, he’d cut off the credit cards and the cell phones, and changed all the passwords; it was like I no longer existed.

The mistake most women make is that they go back, but I never went back. Once you decide you’re going, you can never ever go back because the violence will only escalate.

Q: How were you treated in the Muslim community?

A: I thought Muslim women were the only women going through this, then I realized domestic abuse crosses education, financial, religion, race, ethnicity—every barrier. Women everywhere are going through this. I was completely ostracized from the Muslim community, and my mosque shut its doors on me. Even though divorce is allowed in Islam, we are the forgotten ones.

Q: How did you found Spiritual Biz Moms?

A: I was volunteering and telling my story, sharing it with women, going to penitentiaries, and I started getting awards. Somewhere along the line I thought, I think I have a business here. I started researching social media and getting noticed, and my business evolved. I realized I could contribute and be of service. I thought, If I can do this for me, I can do it for others. I started around 2012. I work with men and women, including non-Muslims. Muslim women are my audience, but I work in many circles.

That led to the development of Million Stars Academy, which is a certification program where I help women launch successful coaching businesses. I learned how to create a best seller on Amazon, and of the eight books I’ve written, five have hit number one on Amazon. I do it myself, without an agent or a publisher. I’m able to pay my bills comfortably and travel, and I’m safe. I don’t have anyone telling me what to do—and that’s what freedom is. And I get to live my purpose every single day. I am incredibly grateful for the life I have today.

If you are experiencing domestic abuse, you can reach out anonymously to the National Domestic Violence Hotline at 1-800-799-7233.