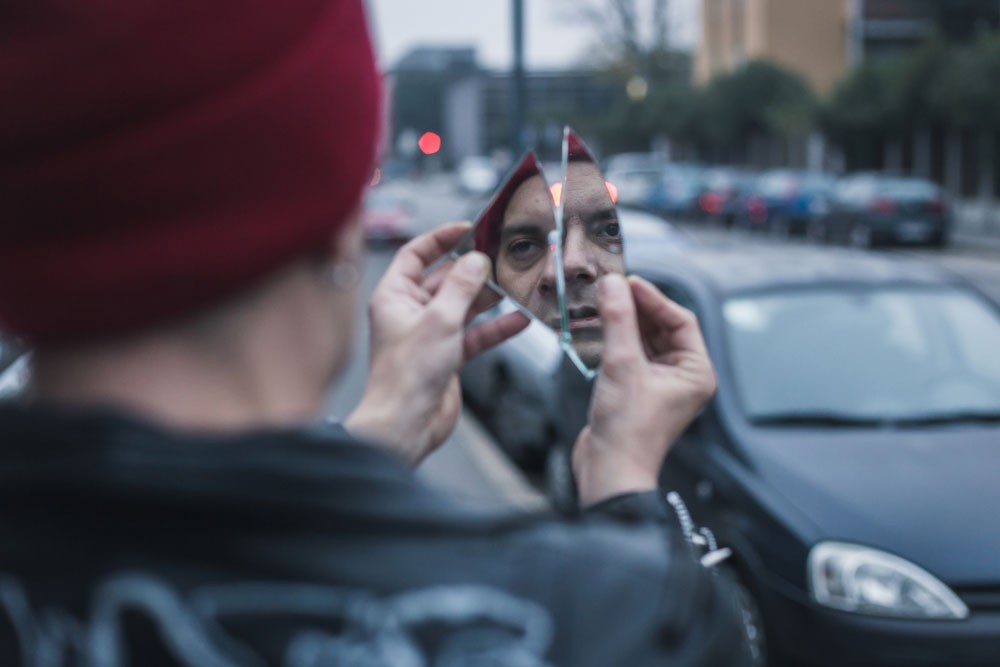 I got a call from camp that every mother dreads. My son is unhappy and wants to come home. There is a boy, he told me, who is mentally challenged. Then sobbing, he burst out, “And he reminds me of dad.” I’d later call the camp and learn that this boy—who was by all accounts, including my son’s, very sweet—did odd things. The other campers would sing the camp song. This boy would sing his own song. “No one understands but you,” my son said softly.

“Look, the building is crying,” my ex-husband said to me looking out the window at the rain against the neighbor’s building. I stopped and looked at him. Was this a beautiful thing to say, or was it strange? In our basement, he collected doors that he found on the street, more than 60 of them. He had buckets of doorknobs and so much furniture that it spilled into the backyard. It spilled into the backyard where he kept food hidden, in case he was hungry.

In the walls of our old building, he stored more furniture. Broken fish tanks, old crutches. I never knew where much of it came from. One day, I looked out the window and saw him pushing a bright-orange shopping cart down the street. He had on safety goggles and was grinning wildly. He should stop that, I thought, the neighbors will think he is crazy.

He carved topiaries into his beard. A kaleidoscopic web of wires and strings crossed the ceiling of his basement workshop, where he spent all of his time. “Each string” he would later tell me, tapping his temple with his index finger, “is attached to my brain.” He had always had a spotty work history, but his highly paid jobs lasted for years at first. Then they lasted for months, for weeks, and then, finally, for hours. “I am more enlightened than Buddha,” he told me earnestly one day. “Closer to God than Jesus,” he explained a different day.

“When did he die?” a holistic healer asked. I could remember almost to the day when he sat catatonic on our old, green sofa. He sat for days. Pregnant with the boy now calling me from camp, I thought, It is depression. “How did you know?” I asked the healer, as my tears poured forward. She gave me a soft smile, “My mother was schizophrenic.”

When people die, there are rituals. People comfort the family. They eat cake together. No one brings a cake when your husband becomes mentally ill. My small family became a family of three. Two boys and me. We bought a dog. A neighbor, who had seen my ex-husband forcibly removed from the house by the police commented, in a thick Polish accent, “Dogs are good for boys.” People said I was divorced. I felt widowed.

My ex-husband wanders around a small town three hours from our home. Nothing is the same, but everything is the same. I still get the phone calls that break every mother’s heart: “I’m homesick, Mom.” But there is a twist: “He reminds me of Dad.” Their father is a ghost presence in my boys’ lives. Mine, too. I sometimes wish someone would reach out to us and say, “I’m sorry for your loss.”

I don’t know if I will pick my son up from camp early. One of the hardest things about being a Solo Mom is making decisions like that on your own. But what I do know is that I will talk about my ex-husband’s condition openly and honestly. There are no sympathy cards for when you lose a husband to mental illness. But still, I think my son can’t be right when he says, “No one understands but you.” There must be more of us, but we are very, very quiet, like we are walking in a cemetery.