When Black Lives Matter More Than You Ever Expected 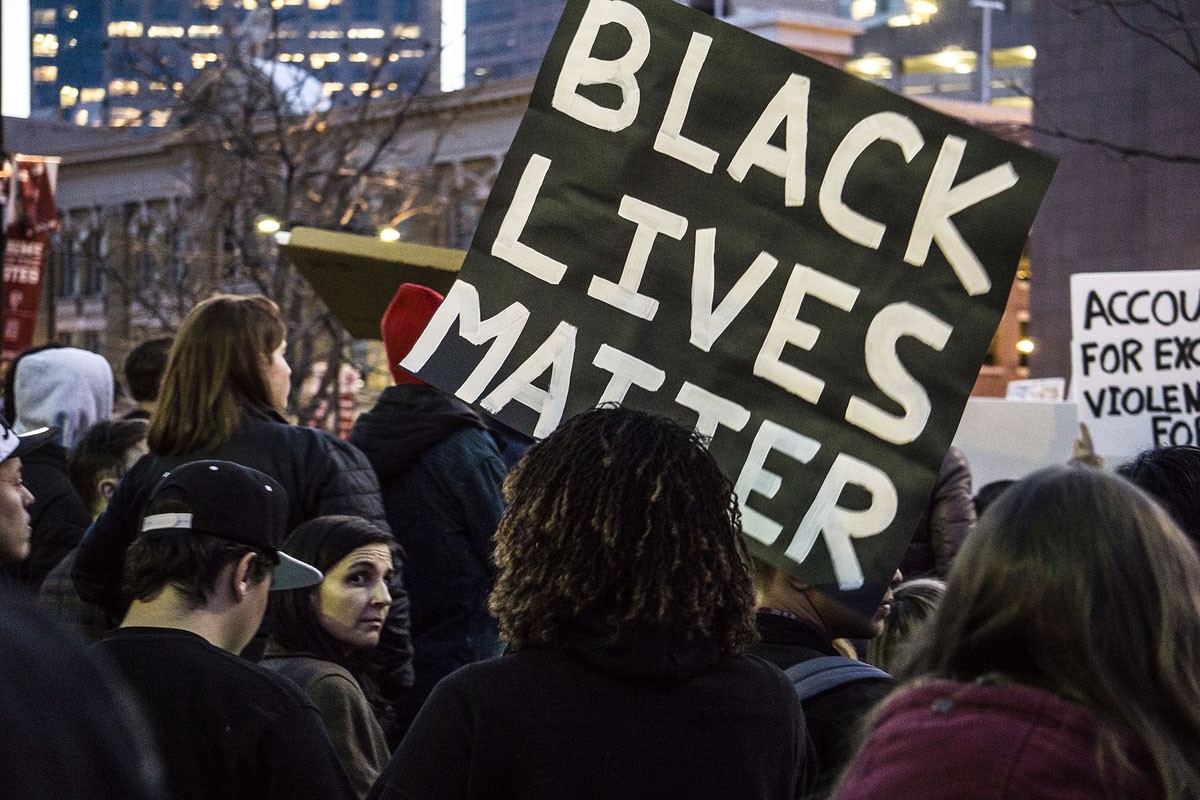 On being a white, Jewish widow raising a black son

Do you remember Tamir Rice, the 12-year-old boy holding a toy gun in a playground who was gunned down by a Cleveland rookie police officer in 2014? His name brings shudders of dread to anyone who is the parent of a black child because we know that our kids, and especially our boys, are more likely to be targeted by the criminal-justice system and suffer violence at the hands of law enforcement than their white counterparts.

Growing up a white, Jewish dentist’s daughter in Long Island, I never dreamed that someday I’d be uttering those words.

My son’s father was black. So even though some would prefer the term “mixed-race” or “multiethnic,” when it comes to the butt end of racism, these nuances are lost. I know that my adolescent son, with his curly Afro and caramel-colored skin, is likely to be more of a target than his straight-haired, blue-eyed friends. Officers of the law may look upon him with more suspicion, strangers may be scrutinizing him more carefully, and teachers may have preformed opinions of him, his intentions, and the significance of his behaviors. Whether I like it or not, I’ve brought my child into a narrative that we had no part in writing, yet I have been forced to weave this narrative into the story of our lives.

Yes, I’m the white lady with the darker-skinned-than-me boy, who others may assume is my adopted child. I am the one who shares an invisible bond with black mothers, even though some may look upon me with suspicion or even hostility for the differences between us. And yes, I’m the one who combines her white privilege with her mama-tiger instincts to protect my black son from all perceived threats to his safety and well-being, be they friend or foe. But ultimately, I don’t feel constrained by what I consider to be the artificial construct of race. I am the one who loves my boy so much that I’m ready to make whatever connections and erect whatever boundaries necessary to help him find his own sense of community and safety in the world.

I’m also a Solo Mom. My husband, Ivor, born and raised in the South Bronx, died almost seven years ago due to complications from sickle cell disease. He lived his life as a chronically ill but extremely proud and extraordinarily stubborn man. When I look at my son, I see so much of his father in him. There’s the obvious similarity in appearance. But the six-and-a-half years during which Ivor served as a stay-at-home dad also imprinted much of his personality on his son. And in the years he’s been gone, I’ve seen his innate gifts of confidence, intelligence, spiritual insight, natural rhythm, grace, good humor, and persistence emerge in our child.

I’m no stranger to the black community. Having been a part of Ivor’s life and extended family for more than 20 years, I’ve had ample opportunity to witness firsthand differences in our lives that I might not ever have understood if I hadn’t made the conscious choice to enter his world. My childhood (I grew up in uber-segregated Long Island) was as different as the one he experienced in Hunts Point, as if we were from two different countries. Still, we created our own version of a blended family.

History was an important part of our development as a couple. We took the time to learn each other’s personal stories and familiarize ourselves with each other’s cultural and political reality. Fortunately, neither of us grew up to be terribly religious, so we didn’t have that bridge to cross. But the line separating his poor upbringing and my relatively comfortable, middle-class one was impossible to ignore. It distinguished the host of unnamed privileges I enjoyed as a white woman from the everyday manifestations of racism that shaped his days.

For example, we discovered that for a black man with a chronic illness that is prevalent in people of color and requires really strong narcotic medication to deal with the acute-pain episodes, it really helped fight the inevitable stereotypes to have a white lady around to make requests of doctors and nurses and fill prescriptions. We marveled at how overtly some people’s racism was revealed. We dubbed this gift “White Lady Syndrome” and made use of my ability to soften people’s mistrust whenever we could.

Then there was that time we showed up at a Harlem screening of a Black Panthers documentary that had been hosted by a local black separatist organization. You can imagine the difference between the warm welcome my husband got and the chilly reception that greeted his white wife. This was during the early 1990s. Spike Lee’s movie Jungle Fever had just come out, City University of New York professor Leonard Jeffries was pissing off a lot of white people (especially Jews) with his talk of Eurocentrism, and Sister Souljah’s out-of-context remarks about gang members killing white people made headlines when they were taken up by Bill Clinton as part of his 1992 presidential campaign. It was a particularly charged time to be part of an interracial couple, especially in New York City.

By the time I got pregnant in 2002, we had settled into a fairly comfortable multicultural existence. Our extended family circle had grown into a veritable rainbow of people, and the extreme needs of Ivor’s illness had weeded out everyone but the most flexible and understanding of our friends. It was into this circle of love and acceptance that Josiah was born in 2003. But isn’t there always a bit of disconnect between the safety we create for our families in our homes and the cold reality of the world outside those walls, where people don’t necessarily have our best interests at heart?

Growing up as a white girl, I never experienced the kind of mindless bias that every black child in this country has to eventually face, when the harsh reality of racism makes itself known in their lives away from their families. Even my Jewishness was mirrored comfortably in my New York suburban community and remains largely a nonissue in my New York City–based adulthood. The privilege I enjoy as a white woman can sometimes be a mask, shielding me from the reality of what others face, but as it has related to my husband and child, it’s been impossible to hide behind it.

Loving someone perceived to be of a different race, especially when that person is your own flesh and blood, changes everything. I have a sickening fear of how the legacy of institutionalized racism could impact the one dearest to me—my son. I am grateful for the Black Lives Matter movement for directly taking on the continuing, legalized violence toward people of color at the hands of law enforcement. But coming into a visceral understanding that I could, in fact, be one of those devastated mothers whose child’s life has been stolen from her . . . this has been a shocking revelation.

In some ways, I’m like a healthy person who has become suddenly ill. My symptoms may not be any worse than someone who has been chronically ill his whole life, but I certainly don’t have the muscles or the practiced strategies for dealing with them that my more experienced counterpart may have developed. Don’t get me wrong. I’m not romanticizing the experience of a lifetime of managing the everyday crushing slights and defeats that Claudia Rankine detailed so vividly in her book Citizen: An American Lyric (Graywolf Press, 2014). I don’t envy the fear, the anger, or the sense of despair that might result from years of feeling trapped by circumstances beyond my control.

Here’s what I know: I’ve had to learn to be brave in ways I never expected, for both me and my son. I’ve learned that the hardships that racism brings can also inspire a tremendous fortitude and depth of character in those who face it head-on with courage, faith, and humor. And I’ve learned that the combination of my own personal experience of how things ought to be for everyone coupled with my firsthand observation of seeing my loved ones mistreated has made me determined to use whatever privileges and insights I possess to make a difference where I can.

I’ve seen my son characterized as a misbehaving kid in nursery school, while his similarly acting blond-haired, blue-eyed best friend was treated like a delightful free spirit. I’ve seen my son be treated with suspicion and hostility by teachers and other authority figures, even when his behavior did not warrant such treatment. I’ve seen him feel the discouragement of being cast in the role of troublemaker before he even had the chance to get to know his accuser. It hurts me to know that these patterns will most likely deepen as he gets older, and that he may very well join the ranks of African American teenagers and adults who have to work twice as hard to be perceived as half as good.

I’d love to feel that having a white mother will give my son a free pass, but I know that isn’t the case. The best I can do, particularly as a Solo Mom, is teach him everything I know about the world and more. I’m grateful that we spend time easily in every borough of our city, traversing neighborhoods of every hue and personality, and that our extended family circle spans all races, religious and spiritual traditions, genders and sexual identifications. By the same token, I cherish his study of traditional Ghanaian drumming, his easy affinity for hip-hop music and dance, and I look forward to the day when he, too, has his mind forever blown by reading The Autobiography of Malcolm X.

I want my son to grow up with equal parts of fearlessness and intelligent, informed caution. I want him to feel equally proud of his African American/Native American (yes, he has indigenous roots as well) and his Eastern-European, Jewish heritage. I want him to understand the bitterness and triumph of all parts of his history, even as he embraces the idealism of how our world can be a more fair and loving place. And as we go along, I am teaching him that even within a family, we bring a certain vitality to our lives as we negotiate the differences between us.