A Blue Dot in a Sea of Red: Why I Stay 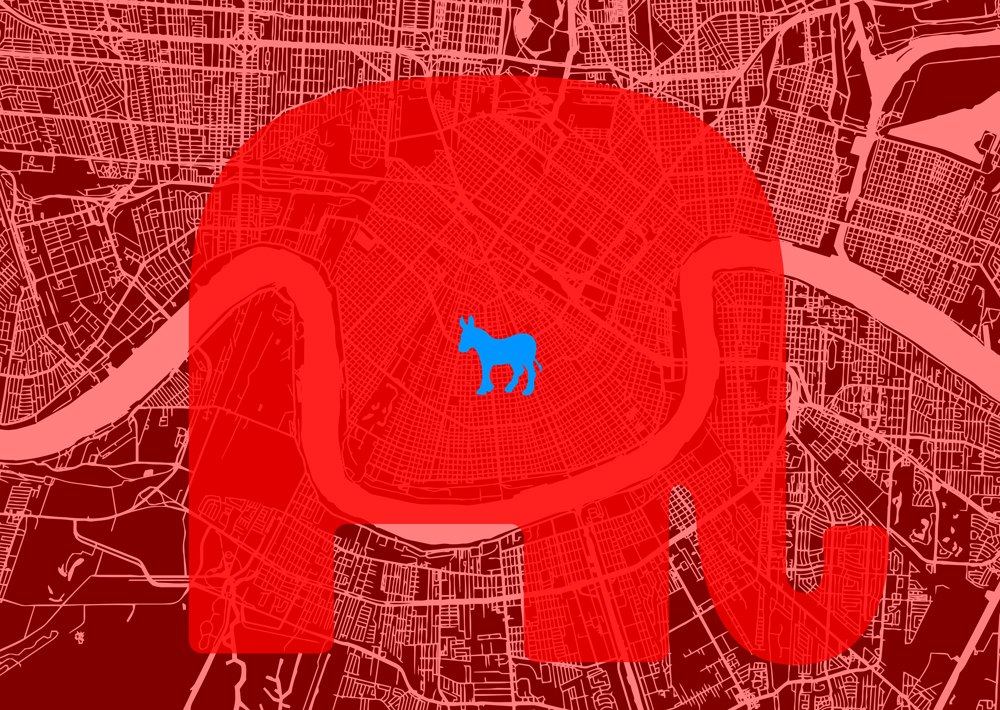 Life lessons from a liberal in a very conservative town

Let’s just get it all out there, shall we?

I believe in a woman’s right to make her own reproductive choices. Climate change is real. I think this country has a hideous problem with systemic racism. I’m pro universal health care, pro immigration, pro gay marriage, pro science, pro public education—and I don’t care whether the person in the bathroom stall next to me has a penis or a vagina as long as they flush the toilet and wash their hands.

I know there are millions of people out there who agree with me, but not many of them live in my state. Even fewer live in my town. I am a bright blue dot in a very red town located in the very red state of Louisiana (New Orleans notwithstanding).

And it’s exhausting. That laundry list of beliefs cuts to the very core of who I am and how I’m raising my child. To have it challenged every day, either indirectly or right up in my face, requires a suit of armor that gets extraordinarily heavy, especially in this political climate where the stakes seem higher than ever.

Everyone, it seems, has something riding on what happens not only in Washington, DC, but also in our statehouses and local legislatures. What I want for my child is not that different from what all the other families in this Bible Belt town want for their children—a good education, quality health care, and a foundation that will set him up to be a kind and successful person.

I don’t, however, want a gun in my child’s elementary school. Yet this year, my school board put an armed officer in every school, including the K–1 schools. They were met with resounding applause from people who didn’t, or couldn’t, understand why I was unhappy.

Further driving us into black-sheep territory is the fact that we are a nonreligious family. Yet the only private-school options in our town are Christian-based. And when I told another mother at an area pool that I was a single mother by choice—after she kept asking questions about my nonexistent husband—her response was to ask me if I had a church. When I told her we were nonreligious, her response was to invite me to her church, saying, “We take all kinds.”

When I moved here four years ago from New York City, I was expecting an extreme culture shock, and I got one, in ways both bad and good. I wasn’t anticipating the deep moral, political, and philosophical division this nation has seen in the past two years, which has served to make our differences that much more stark, more glaring.

By now you may be wondering, Why, exactly, is she still living down there?

I live here because there’s a lot of good. I live here because my son’s volunteer soccer coach saw us heading into school for his first day of kindergarten, and he waited outside to give my son a hug and a high five to wish him luck.

I live here because my neighbors rushed over first thing in the morning to help me thaw and wrap my pipes when they froze solid during an uncharacteristic arctic blast.

I live here because there are friendly people who welcome you into their lives no matter whether you vote red or blue. The community as a whole cares about and looks out for one another in a way I never experienced living in the Northeast.

I live here because children here are expected to be seen and heard. They are valued as their own contributing members of society, also a stark contrast to New York City, where using a stroller earns you every stink eye within a five-block radius.

I live here because we are a quick drive into New Orleans, which has some of the most intriguing and eclectic cultures anywhere in the United States.

And I live here because the cost of living is insanely low compared to that of the Northeast, which means I can spend less time working and more time with my son. That’s the reason why we moved down here in the first place.

There are, however, more of us liberal-minded, Southern-living folks than you’d imagine. You just have to know how to find them. While I’m out and proud about my beliefs, others can’t be for fear of reprisal at work or home, so there are secret Facebook groups where people chat and organize and support Democratic candidates, and even more moderate Republican candidates who are up against right-wing extremists.

I once made a good friend while waiting at my son’s doctor’s appointment after we realized we were both “one of them.” She casually mentioned she went to Berkeley. I casually mentioned I moved here from New York City. We each raised an eyebrow—and became friends. It’s almost like we have our own language to find one another. We need a secret handshake.

I also like to think that my blue vote counts for more down here. It’s easy to get complicit voting blue in a place such as New York City, where you know your voice will be part of the majority chorus. But here, literally every blue vote counts for something. It’s meaningful even if your candidates don’t win (and they usually don’t). I could have gone to Washington, DC, for the inaugural Women’s March, but I chose to stay right here and join a fierce group of women in New Orleans who didn’t get nearly the same press as our ladies to the north.

I’ve lost friends down here over my political and social morals, people who once were good friends, but I’ve gained many more who love both me and my son because of, or in spite of, our unabashedly liberal views.

It’s easy to stare at Facebook with an “us versus them” mentality. To judge without listening. To bypass those who could be a good friend just because they aren’t exactly like you. And although there are certain things I absolutely will not compromise on—racism and homophobia, chief among them—all or nothing isn’t a sustainable way of life.

I like to think I’ve learned more about giving people a chance in the four years I’ve lived here than in a lifetime lived in the Northeast. And I hope they have also learned from us.