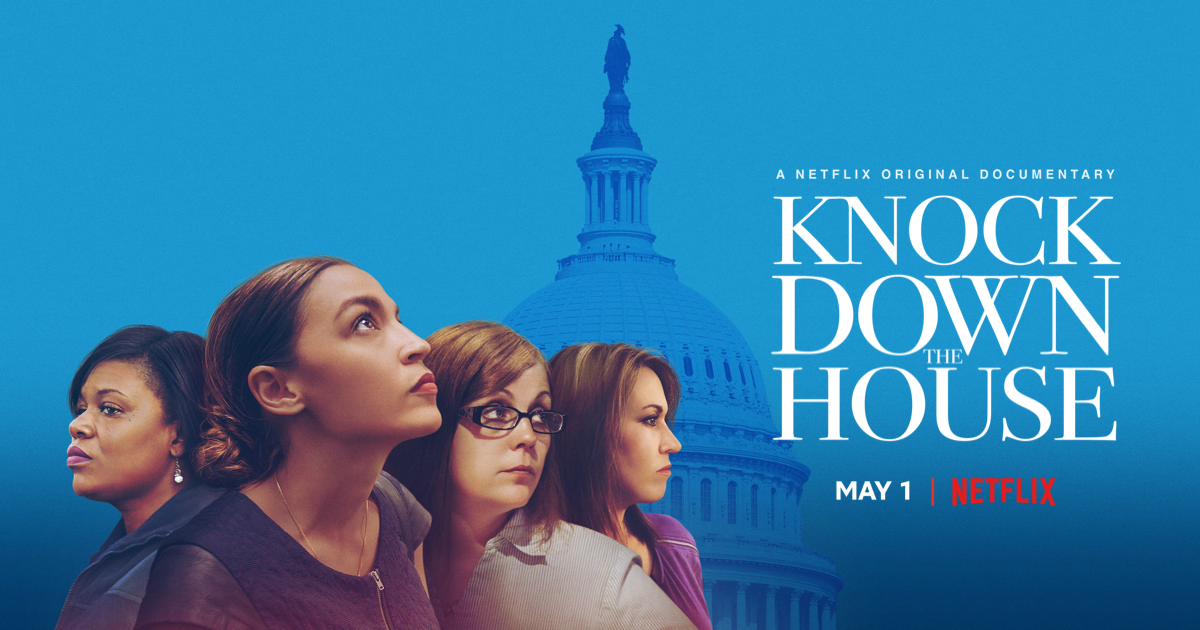 The women who made history by winning a record-breaking number of Congressional seats in the 2018 midterm elections have heard it all—and worse.

The new Netflix documentary, Knock Down the House, spotlights the grit, determination, fear, anger, and passion that got these women elected and helped Democrats take back control of the House. Headlining the documentary is the meteoric rise of Alexandria Ocasio-Cortez (AOC), the outspoken freshman congresswoman from the Bronx who quickly made a name for herself as a champion of women’s rights and working-class Americans, and an apparent enemy of establishment Republicans.

“I’m used to being on my feet for 18 hours a day; I’m used to receiving a lot of heat,” Ocasio-Cortez says in a voice-over as she’s shown scurrying around her restaurant job, scooping ice and stocking the bar. “I’m used to people trying to make me feel bad. They call it working class for a reason because you are working nonstop.”

And then, “Americans aren’t asking for a lot. They’re just asking to get by.”

But maybe we should be asking for a lot, or at least a lot more than what we are currently being offered. Three years into the Trump presidency, women’s rights continue to stumble—if not plummet—backwards, from the ever-tightening restrictions on abortion to the wage gap that persists for all women, but especially for women of color.

The documentary shows that fire of inequality, of not having a say in what happens in their states, their hometowns, even their own bodies, as lighting up in women en masse across the country.

While Ocasio-Cortez made a splash on the Hill and in the headlines, both during her campaign and since her election, Knock Down the House is at its best during its multiple vignettes of other candidates who ran with the same fire and fury, albeit less fanfare.

“I’m mad as hell,” says Paula Jean Swearengin, a 2018 Democratic hopeful whose progressive politics made waves in her native West Virginia before she was defeated in the primary by incumbent senator Joe Manchin. “We’ve been collateral damage.”

The daughter of a coal miner, Swearengin rallied against big industry, fed up with people taking money from corporate interests while forgetting the West Virginians who put them into power in the first place.

“West Virginians are strong, we are proud, and we won’t give up,” she says in the documentary, lamenting the stereotype her state carries as uneducated with no shoes and no teeth. “No American should have to beg for something so basic as a clean glass of water.”

Across the country in St. Louis, Cori Bush, who lost her bid for Congress in 2018 but plans to run again in 2020, says she was inspired to get into politics to give her fellow constituents a voice, and a mirror.

“I was not trying to become an activist. I didn’t set out to do that,” says the nurse, single mother, and pastor who lives just outside Ferguson, Missouri, which plunged into riots and racial unrest after the 2014 killing of 18-year-old Michael Brown by a white police officer.

“Being a woman of color, our image is really scrutinized,” Bush says in the documentary, ticking off a list of ways she is judged, including how she talks and how she dresses. “Deal with it. People in our district, this is how we look.”

Having to work harder than their male counterparts is a running theme throughout Knock Down the House, which runs just under 90 minutes. Ocasio-Cortez and her team are seen hitting the streets to collect thousands more signatures than legally required to get her on the ballot, resolute that the team for then-incumbent and former U.S. representative Joe Crowley would work to throw out as many signatures as they could from her roster.

“Basically, what political machines do is they suppress democracy. The whole game here is to prevent you from getting on the ballot in the first place,” Ocasio-Cortez says, arguing that Crowley not only was the incumbent but also the chairman of the Queens Democratic Party and had helped appoint every Board of Elections official. (Crowley has since resigned as chairman.)

“Even though the actual requirement is 1,250 [signatures], because we’re challenging the boss, we need to collect 10,000 signatures,” she says.

Knock Down the House shows Ocasio-Cortez as smart, relatable, and sometimes overwhelmed by the task she is undertaking. The documentary, at times, seems to veer into pro-AOC public relations territory but then corrects itself as it returns to the main message of progress, change, and determination.

Ocasio-Cortez is at her strongest talking about how her upbringing has prepared her for her seat in Congress, highlighted by a stretch of the film intercut with home movies of her playing in the snow and performing on the piano.

She talks about the sacrifices her parents made to move their family into a neighborhood with better schools, even though it meant leaving their extended family behind in the Bronx and being one of the only nonwhite students in her class.

Her mom, she says, cleaned houses, once cleaning a woman’s home in exchange for her daughter’s SAT prep lessons.

“They really made me believe I had true power in this world,” she says.

Fiercely proud of her roots and her identity, Ocasio-Cortez is seen before the primary banking on “an insurgent outside grassroots candidate that’s a woman of color from the Bronx” to catch Crowley off guard and snare voters.

Though early poll numbers showing her 35 points behind left her with tears in her eyes—“I just don’t want to let them down,” she says of her supporters—the film ends with Ocasio-Cortez full of determination and pride, sitting in front of the Capitol building.

Right where she belongs.