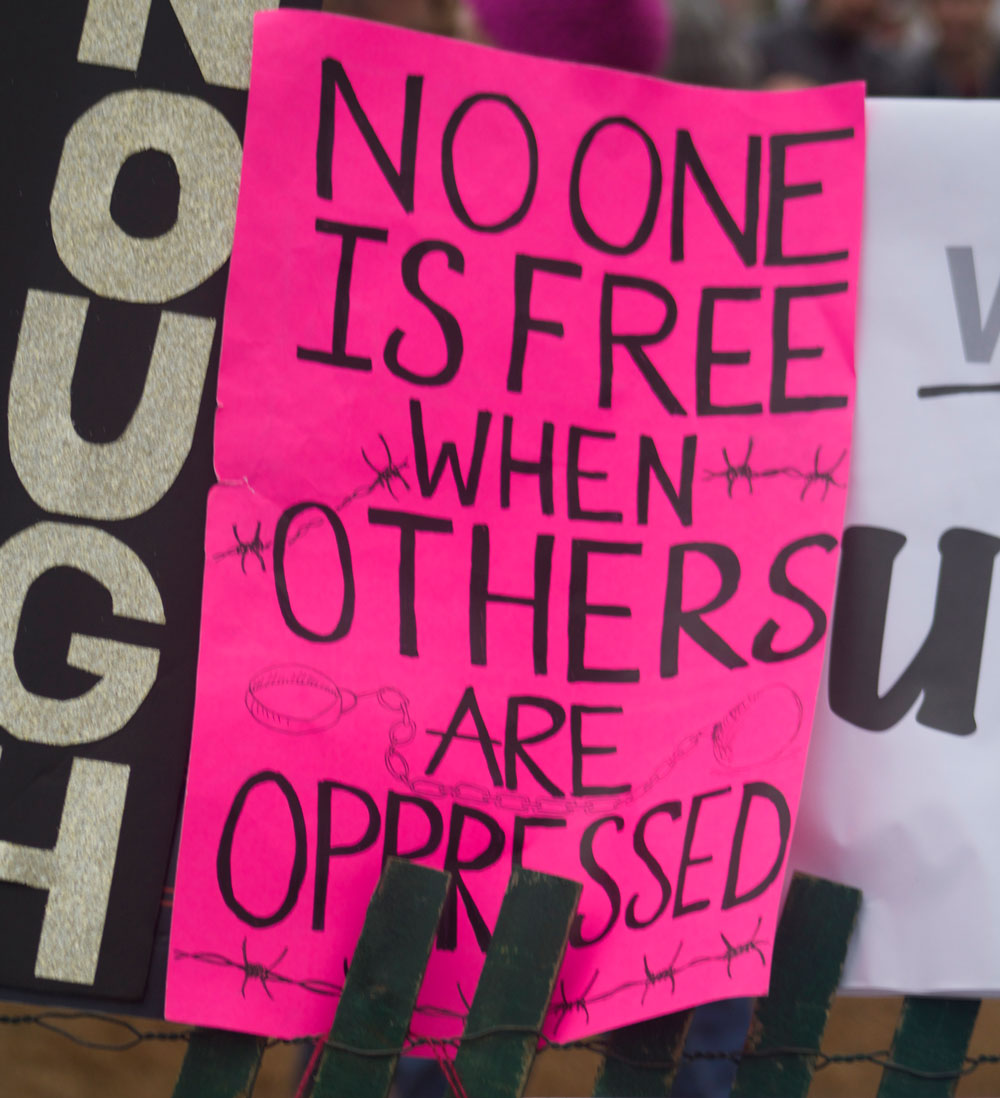 At 4:42 p.m. Eastern time on Friday, January 27, President Donald Trump signed an executive order suspending entry of all refugees into the United States for 120 days and barring those fleeing the slaughter in Syria indefinitely. The order, which also blocked entry into the United States for 90 days for citizens of seven Muslim-majority countries, landed on government desks as employees were preparing to leave for the weekend. Chaos ensued as experts in government agencies scrambled to interpret the new pronouncement.

According to CNN, on Friday night, the Department of Homeland Security (DHS) applied the restrictions to people from seven countries—Iran, Iraq, Libya, Somalia, Syria, Sudan, and Yemen—but stated that restrictions did not apply to those with lawful permanent residence in the United States (green cards). Overnight, however, the president’s inner circle, which includes chief strategist Steve Bannon, intervened to counter guidance from DHS lawyers; by Saturday, January 28, the restrictions covered green card holders as well. Travelers around the world were told they could not board flights to the United States. Some were hauled off planes.

As part of the fallout from the order, two University of Massachusetts (UMass) Dartmouth professors who are Iranian were detained at Logan Airport in Boston on Saturday upon their return from an academic conference in France. Both professors are legal permanent residents of the United States and possess green cards. UMass administrators, the American Civil Liberties Union (ACLU), and immigration lawyers became involved, acquiring a temporary restraining order. After several hours of detention, the professors, Mazdak Pourabdollah Tootkaboni and Arghavan Louhghalam, a married Muslim couple, were released. The ACLU of Massachusetts’s complaint on their behalf stipulates that the professors “have a constitutional right to return home to the United States after a brief trip abroad, and cannot be deprived of their lawful permanent status without justification and due process protections.”

The Massachusetts challenge to the professors’ detention was filed by Matthew Segal, legal director of the ACLU of Massachusetts; immigration attorney Kerry Doyle of Graves & Doyle; and Susan Church of Demissie & Church. Church discusses the executive order here; ESME recently spoke with Doyle about the events surrounding the case and its implications for Solo Moms and kids everywhere.

Q: Kerry, thanks so much for taking the time to speak with ESME. When did you first hear about the executive order, and what was your reaction?

A: I learned Friday, through the American Immigration Lawyers Association, that this was coming down the pike. When I saw it, I was horrified. We knew it would be bad, but I thought it would be more systematic, sort of an overall change within the parameters/program we have now. But I can’t say we were completely surprised.

Q: Did your role in this case begin upon news of the detention of the UMass professors, or before?

A: I got involved on Saturday. I was in my office, doing other things, and my colleague Susan Church called me and said she and Heather Yountz [Church’s associate] were going out to the airport. Reports were coming in that people were being denied entry [to the United States], so they went over there and called me. They said, “We have to file something.” We got in touch with Matt Segal; he and I were talking, trying to get materials printed out and letting the federal court know an emergency motion was coming in.

Q: Can you describe what your days and nights looked like as you worked to acquire a temporary restraining order?

A: I was already busy; I mean, I was in the office on a Saturday! But once Susan called, it was like, you jump into action. You gotta do it. Things got frantic because it was starting to get late in the day, and I heard that the hearing was going to be at 9:30 p.m. on Saturday. There were computer issues. I was in my office, and we were trying to figure out/finalize the motion [for a temporary restraining order] so we could print out a hard copy and bring it to the court.

Then I was running down to the courthouse in Boston; looking back, it’s a blur. By now it’s almost midnight Saturday. They have to call in the judges, the bailiffs, the marshals. The clerk had to come in and the guards at the gate; it took awhile to assemble everybody. You can electronically file at the courthouse in Boston, so we’re all in the hallway there, and Susan called her husband [and law partner] Derege Demissie, and he electronically filed the motion so we could get a case number and officially open the case. The judges come, and we have arguments [a legal term meaning to present reasoning in support of a point of view]. Matt, Susan, and I did the argument to propose the temporary restraining order. We [were presenting to] both the magistrate and district court judge.

Q: Can you explain what the UMass professors were up against and what the filing accomplished?

We were really afraid the professors were going to be deported or detained. So the filing was to protect them so they wouldn’t get deported. As long as they were here, we could keep fighting for their rights.

Q: The restraining order is temporary. When does it elapse, and at that point, what happens next?

A: It’s a seven-day restraining order; it expires early Sunday morning [February 5]. We are scheduled for a hearing on Friday morning, February 3. The government is opposing the extension of the temporary restraining order (TRO). At the hearing, Judge [Nathaniel] Gorton will hear arguments about whether or not to extend the TRO and to set a schedule to file briefs in the case. The main legal argument we’re pursuing is that permanent residents of the United States can’t currently travel because they may not be able to get back into the country and that the executive order is improper and unconstitutional on numerous grounds. Ultimately, we want to get the executive order thrown out.

Q: The timing of Trump’s order—on a Friday, as everyone is powering down for the weekend—is interesting, to say the least: Do you interpret this as an ignorance of how government works, or do you think the timing was intentionally chosen to foment chaos?

A: In my opinion, the latter. I think the timing was intentional. [Trump is] more clever than people give him credit for.

Q: What do you think the impact of Trump’s immigration edict could be for Solo Moms and kids everywhere?

A: Well, I think that anything like this puts a hardship on a family headed by one parent. If it’s just a Solo Mom, say, there might not be someone to step in and help. What if you’re from one of the countries and your mom [back home] is ill and you need to go help? If you try to travel, you make arrangements for your kids here in the United States, but you don’t know if you’ll be allowed back into the United States. You’ve got to, what? Choose between your kids and your mom?

Or take the case of the UMass professors. They were at a conference. Let’s say you’re a professional, and you have to go to a conference abroad—what do you do if you can’t return and your kids are stuck here? Choose between your career and your kids? And when you’re on your own, it’s that much harder to navigate these decisions. Right now, with a nonimmigrant visa, you’re not coming back. Your kids are stuck here without you.

Q: Trump’s policies are causing chaos and distress, and not only in the arena of human rights. The environment, education, the economy: it can be argued that all these areas are experiencing duress under the new administration. What is your advice to women—to anyone—desiring to stand up and effect positive change?

A: I honestly think one of the best things to do is to call your congresspeople: your senators and representatives. It makes a difference. Some offices have a tally sheet [recording calls], especially with immigration. Hate is a huge motivator, and if you have haters calling in, and the majority of people think everything’s fine and don’t call, the tally sheets are going to reflect that. The nonhaters need to make a noise, too.

You can reach out online, too. Your congresspeople have websites. [Not sure who your congressperson is? CongressLookup can help.]

Go to your town meetings. Stay involved. Have a voice!

For more ideas on how to stand up for what’s right, ESME’s Heidi Kronenberg and Marika Lindholm outline “15 Ways for Moms to Resist Trump Without Burning Out.”