A Widow Thanks Her Supporters with a Party 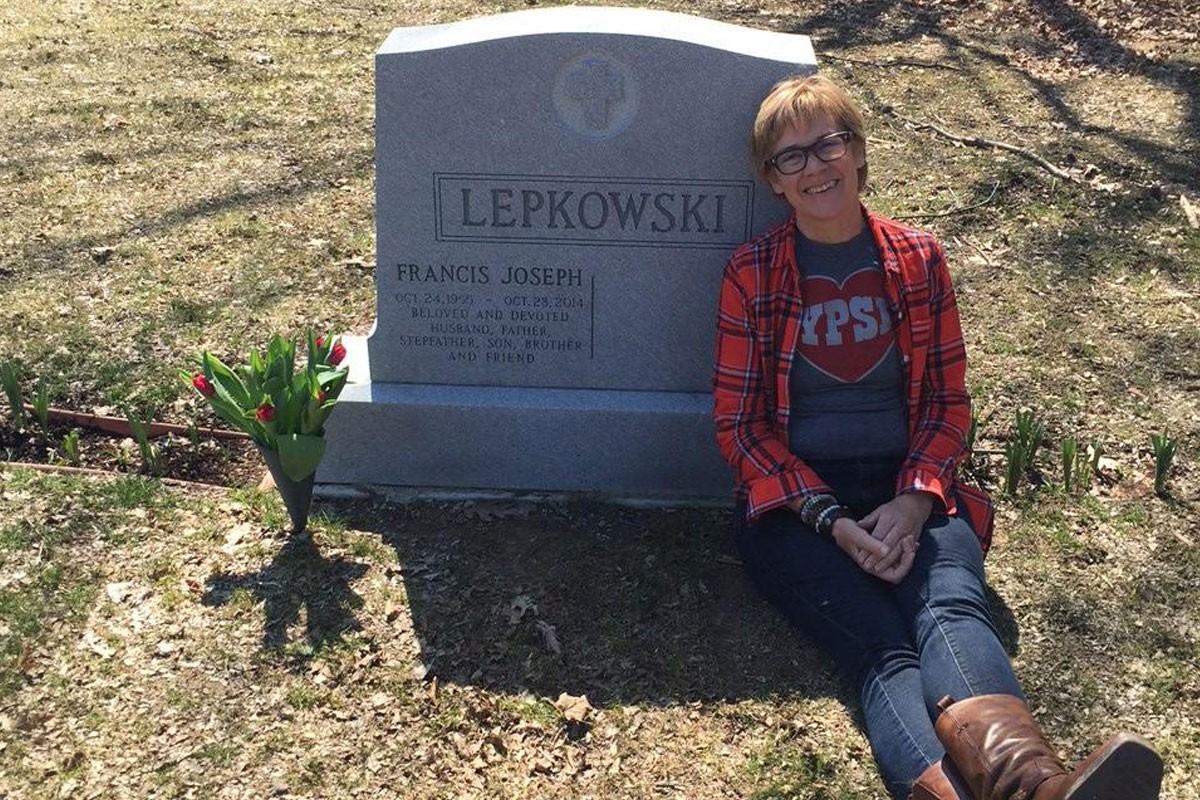 On October 28, 2014, Annie Lepkowski’s husband, Frank, died unexpectedly of an undiagnosed enlarged heart. He was 59 years old. At 54, Annie became Solo Mom to kids Avery, Keelin, and Cameron for a second time: Lepkowski had divorced the kids’ dad years before, and her 2011 marriage to Frank had been a joyous new beginning. The death blindsided Lepkowski, but more than a year after losing the man she has described as her best friend and soul mate, she is redefining her path. To what does she ascribe her resilience? During a long-ranging conversation, Lepkowski discussed the factors that have helped her begin to heal in the wake of tragedy.

“It really was a process,” Lepkowski says of the recovery that took place in the days and months after Frank’s death. She says she felt “flat” at first, drained of any personal confidence, but that a certain drive propelled her forward. “There were several people I knew as widows,” Lepkowski relates. “I saw them at Frank’s visitation and asked them, ‘Does it ever get better?’” If she’d been hoping for encouragement, she didn’t get it: “They said no,” Lepkowski remembers. “And I thought, I can’t accept that.”

She still had two children at home to look after, high schoolers Keelin and Cameron, and in the immediate aftermath of Frank’s death, people in the community stepped up: with food and rides for the kids. “Since we were relatively new to [Royal Oak, Michigan], I really didn’t know anyone well enough to ask for help, but people just came and did,” Lepkowski says. In March 2015, touched by the outpouring of generosity, she was inspired to plan a party to give thanks. “I wanted to thank people who had been there for us; I started counting how many people, and it was a lot.” And memories of Frank, the man who always had a big heart, both figuratively and literally, buoyed her. “It’s like, I needed his help [with planning the event]; it was his voice in my head, urging me on, encouraging me. It was like we did the party together.”

As the months passed, the scope of the event broadened. “It became about people and community, but also music and art,” Lepkowski says. She and Frank had shared a deep, abiding love of music, and as she planned, music assumed an increasingly greater role. A Facebook friend, Eric Patrick Kelly, helped her design an invitation patterned after concert posters. Her son Cameron’s band agreed to play at the event; she hired another friend to act as deejay. Some elements of the evening came together seemingly magically: when Lepkowski decided to incorporate a silent auction to raise funds for the American Heart Association (AHA) in honor of Frank, people came forward, offering everything from hand-knit scarves to artwork and gift cards as auction items.

“As I was trying to live the love Frank had always shared, his interest in getting to know people—as I was doing that, opportunities [for the party] came together,” Lepkowski says. Her focus on community meant sometimes letting go of ideas she’d cherished. “I had to let go of ego,” she says. “It wasn’t just my party. It was about community and listening.” When Lepkowski voiced her plan to set off Chinese lanterns at the end of the night, Keelin reminded her mom that doing so wasn’t environmentally sound. “She was right,” Annie laughs. “I had to let that idea go, knowing that another idea would come.”

And in the months Lepkowski spent planning the event, something happened within. “I was renewing a side of myself that had been kept out of view: someone who is more confident, very independent, friendly, kind, open, creative. Someone not afraid to take risks. I had to find something within myself to get through . . . I think the tragedy really developed these sides of me more.”

The party took place on February 27, 2016, and as hopeful as Lepkowski had felt in the planning, the event exceeded even her expectations. Housed in an enclosed farmers’ market space in downtown Royal Oak, the party drew more than 300 people. Lepkowski had operated on a tight budget: she and the kids did the decorations themselves, hanging posters, covering long tables with red butcher paper, and lighting candles set out on “wood cookies,” or slices of wood, that a friend had cut from a fallen tree. Friends donated chili, corn bread, wine, and desserts, along with more than 20 items for the silent auction. Local breweries contributed kegs of craft beer; neighborhood businesses donated food items and paper goods.

Creativity was a major theme running through the evening. “I wanted there to be ways for people to intermingle and collaborate,” Lepkowski says. To that end, she created a large tree artwork, sewn to canvas, for the event. The choice of subject was no accident; Lepkowski identifies with trees. “They are strong. They’re rooted,” she muses. “Trees are deeply grooved and scarred, but they continue to grow.” An artist friend gave her a large piece of canvas, and Lepkowski based the tree design on a drawing she’d made. “I used these upholstery needles [to sew the tree]; the needles are like a half circle, and there was something so meditative about the process. I used natural materials: burlap to emulate the deep grooves bark can hold; rope; moss; different-colored materials. I purposely made the tree rough and real, which was freeing, because I often strive for things to be perfect.”

She and Frank had shared a love of Willa Cather’s book My Ántonia; Lepkowski used pages of the book to make leaves, which she sewed with gold thread. Their stems were twigs Lepkowski had collected from the woods near Frank’s gravesite. She finished the leaves, but when it became apparent that she wouldn’t complete the entire tree in time for the party, she decided to make it a group project. “Again, I had to let go of my ego and not worry about not finishing it as I had said I would,” she says. The night of the event, she set out materials ranging from twigs to gardening tape, fabric, and moss. “At first I felt bad about not finishing it, but then I thought, This is perfect, let everyone help me finish the tree,” Lepkowski says. “And people added the most incredible things that I never would have thought of. Somebody took a blue-and-green batik cloth and cut it in a thin strip; they wrapped it around a leaf. There was moss and a stick: there’s something so simple and beautiful about that.”

Creativity informed every aspect of the event’s fundraising. Lepkowski cut a large, simple heart out of burlap; for a donation, guests could choose a colorful button and sew it to the fabric. Also for a donation, they might set a bright candle afloat in tubs of water marked with legends such as “Gratitude” or “Hope.” These activities, along with proceeds from the silent auction, raised upwards of $3,000 for the AHA.

The evening’s creative pursuits represented on a large scale the role art has played in Lepkowski’s personal healing process. She has always liked to draw: over the years, she has designed and sold painted notecards, and her delicate drawings hang on the walls of her home. But in the days after Frank’s death, art became a lifeline. “Drawing gave me a language for my grief,” Lepkowski says. “It gave me a way to try to share what I was feeling with others because I didn’t know how to express that intensity.”

Art also gave her a way to navigate the disconnect between how she was feeling and how others thought she should be feeling. “I sometimes felt judged,” she admits. “People have opinions about how the grief process should go, and they are sometimes uncomfortable around grief. I felt a calling to help others understand what this loss was like.”

The process was cathartic. “Drawing was a way to reassure myself that I could get through this,” Lepkowski says. She sees the process as an emotional and spiritual undertaking—and a source of relief: “It would take me away for a while.” The work that resulted could be intense. “These are strong feelings,” she says. “A lot of the work is very dark.” But by the time she drew the tree that inspired the canvas for the party, she was starting to heal. “When I drew that tree, I realized that I was starting to use color again. And it was a tree: it represented growth.”

Growth, of course, means change, and Lepkowski says embracing that change is part of the journey. “My life is very different than it was two years ago,” she says. “Sometimes I feel guilt about that. But I’ve come to see change as part of life; there are things you can control, and things you can’t. What you can control is how you approach change and adversity.” She tells the story of a grandfather and his grandson. The grandfather describes two wolves: one represents fear and anxiety, the other is love and compassion. “Which wolf is stronger?” Lepkowski asks. “Well, it depends on which one I feed. At times I have let fear get a hold of me this past year, but I’ve pushed through.” Change, she adds, invites you to take care of yourself—or not. “You can go down one path or another,” she says.

Lepkowski chose to take care of herself, and when I ask her what prompted her to do so, her response is immediate: “I was devastated when Frank died. Just devastated,” she says. “Around February [2015], I remember standing at the kitchen sink. Cameron came up to me and said, ‘We need our mom.’” Lepkowski realized that to be there for her kids, she had to take better care of herself: “Things had become very real very quickly about what’s important and what’s not,” she says. Lepkowski had always tried to make healthy eating choices, but in 2015, she redoubled her efforts; she ramped up her practice of yoga, biking, and hiking.

By Lepkowski’s account, she was overweight at the time of Frank’s death; by the time she hosted the party that honored him, she’d lost 70 pounds and reached a healthy goal weight. During this journey, whenever she felt her resolve sagging, she’d think of the way Frank used to say to her, “Baby, you just keep on being your wonderful you.” Slowly, over the year, it became her own encouraging voice she heard.