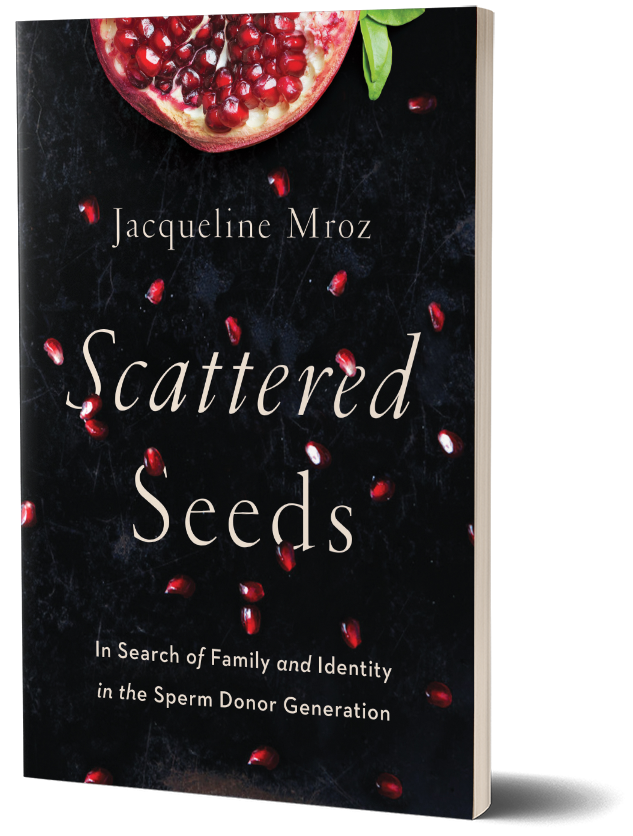 If there’s one lesson you should take from Scattered Seeds: In Search of Family and Identity in the Sperm Donor Generation (Seal Press, 2017), it’s to make sure you diligently research a sperm clinic’s policies before choosing one—especially policies regarding family size limits!

It was the extremely large donor offspring cohorts that originally caught the attention of author Jacqueline Mroz, a veteran journalist specializing in reproductive and family issues. One afternoon, she sat perusing sperm-donor profiles with her sister, who was planning to become a Solo Mom by choice. During their perusal of sperm donors, her sister told her a story of a woman who’d just learned her child had 75 half-siblings. After some research, Mroz confirmed that this kind of large offspring pool was not uncommon, prompting her to write a New York Times article called “One Sperm Donor, 150 Offspring,” which received incredible attention.

In Scattered Seeds, Mroz takes the reader behind the scenes of the unregulated sperm-donor industry in ways that will make anyone’s stomach turn—such as the story of donor B155A, known to have spawned at least 150 children, or a donor who lied on his application about his schizophrenia. She includes stories of chance meetings of half-siblings and of those who felt anger and resentment after not being told they were donor-conceived until adulthood.

Because sperm clinics in the United States are unregulated, there are no family size limits, little uniformity about required medical or genetic tests, or policies about anonymous donors. And because most sperm banks are for profit, their policies are not catered toward what’s best for donors or donor offspring.

Mroz includes many interviews with Wendy Kramer, who founded the Donor Sibling Registry (DSR) after conceiving a child via anonymous sperm donation who desperately wanted to find his father. Kramer advocates for strict family limits, an end to anonymous donation, limits on how many times a sperm donor can donate, more extensive medical and genetic testing, and the inclusion of donor offspring in the formation of new regulations.

When I was choosing my sperm donor, I was largely unaware of the lack of uniformity among sperm banks. I naively assumed they were almost all the same in terms of screening process, medical tests, efforts to keep in touch with sperm donors, family limits, etc. I was focused on what information I could receive about the sperm donor. Finding a donor who felt right seemed of paramount importance, not the sperm bank’s policies. Knowing all I know now, however, I would have spent time finding a sperm bank with the most ethical practices, extensive genetic testing, and strict family limits.

Although little compares to the horrors of the first insemination, sperm clinics continue to foster poor practices that have led to an unknown number of donor-children groups of 150 or more kids. (And these groups could be even larger, since not all births are reported and there are no regulations governing how births are tracked and reported.)

With extremely large numbers of offspring to a single donor, there are concerns regarding accidental incest and the spread of genetic diseases that are unknown or unreported by the donors.

To prevent consanguinity, in the 1990s, the American Society of Reproductive Medicine (ASRM) suggested one child per donor for a population of 800 or 25 per population of 800,000. But, in some cases, sperm is shipped across the world, effectively making this limit unenforceable and nonsensical. Many sperm banks now voluntarily limit to 25 families (a number that is socially acceptable to many), but it is important to check before you decide on a sperm bank because this number is a voluntary limit, and nothing prevents a sperm donor from donating at multiple clinics.

I know that banks such as Xytec allow a limit of 60 families. Mroz does not specify whether sperm banks still allow exorbitant numbers of children to a single donor or whether the recommendations from ASRM have curbed family sizes to some extent. Kramer reports that DSR does have many groups in excess of 100 donor children, but again it’s unclear whether these large offspring groups are a holdover from the practices in the 1980s and ’90s or continuing to form as a result of current sperm-bank policies.

In a 2012 study conducted by Kramer and other researchers and published in Reproductive BioMedicine Online, 164 donors were surveyed. Of those, 84% were never contacted by their sperm bank for medical updates, and 23% said they themselves or close family members had relevant medical/genetic updates.

And end to anonymous donors

It probably comes as no surprise that most kids who know they were conceived by a donor are curious about their donor. Overwhelmingly, children want to be able to meet the donor not necessarily to develop a father-child relationship or seek money but to know their ancestry and medical background.

In the same study in Reproductive BioMedicine Online, 97% of sperm donors said they thought about the children they had helped create. They were curious about how many children they had, whether they were happy and healthy, and whether they shared physical characteristics; 94% were open to contact with their offspring, yet many donors remain anonymous. Many clinics have begun identity-release programs that allow offspring to receive their donor’s information when they turn 18. But the efforts to stay in touch with the donors vary greatly by clinic and are not guaranteed to foster contact.

Kramer and other advocates, including children born via anonymous donation, argue anonymous donation should be ended completely, and the stories in Scattered Seeds certainly lend themselves to that conclusion.

Mroz also highlights the potential for eugenics among well-off recipients who can choose their donor’s characteristics. Although I agree with the potential, I think most women, especially Solo Moms by choice who grew up imagining a love child, did not feel as though they were choosing a “designer baby”; rather, it felt like a consolation prize. Instead of falling in love and making a love child, I got to pick my child’s genes. But that choice came with many unknowns, leaving me feeling scared about my child’s future health.

Though it is possible to choose a blond-haired, blue-eyed donor who went to college and is a certain height, many women I’ve known look for a felt sense of the right donor. The list of characteristics is present and definitely plays a role, but usually a felt sense of correctness wins out.

While Mroz highlights many of the concerns that arise as a result of the lack of sperm-bank regulation, my favorite chapters include many heartwarming stories of contact among half-siblings as well as between donors and their offspring. At times, the half-siblings have had a hard time connecting, but in most cases, the offspring have quickly developed bonds, dropping the term half-sibling in favor of brother or sister to reflect the affection and affinity they feel toward each other.

Many donors interviewed are eager to meet their offspring and have had varying experiences ranging from awkward to regular contact and asking to be called “Dad.” All the relationships and experiences defy conventional family structures, leaving many unknowns about these new relationships and forcing everyone involved to stretch their notions about family.

Although this book’s main intention is to highlight the issues rampant within the sperm-donor industry, it also gives important and fascinating information relevant to any mother raising a donor-conceived child. The history, combined with anecdotes about the lives and opinions of donor children as well as of the donors themselves, provides insight that Solo Moms by choice can use to talk to their children and navigate issues of identity and family.

Are you or are you thinking about becoming a Solo Mom by choice through a sperm donor? Join our Community for information, support, and connection.

Normalizing all families—and a little sex education, too