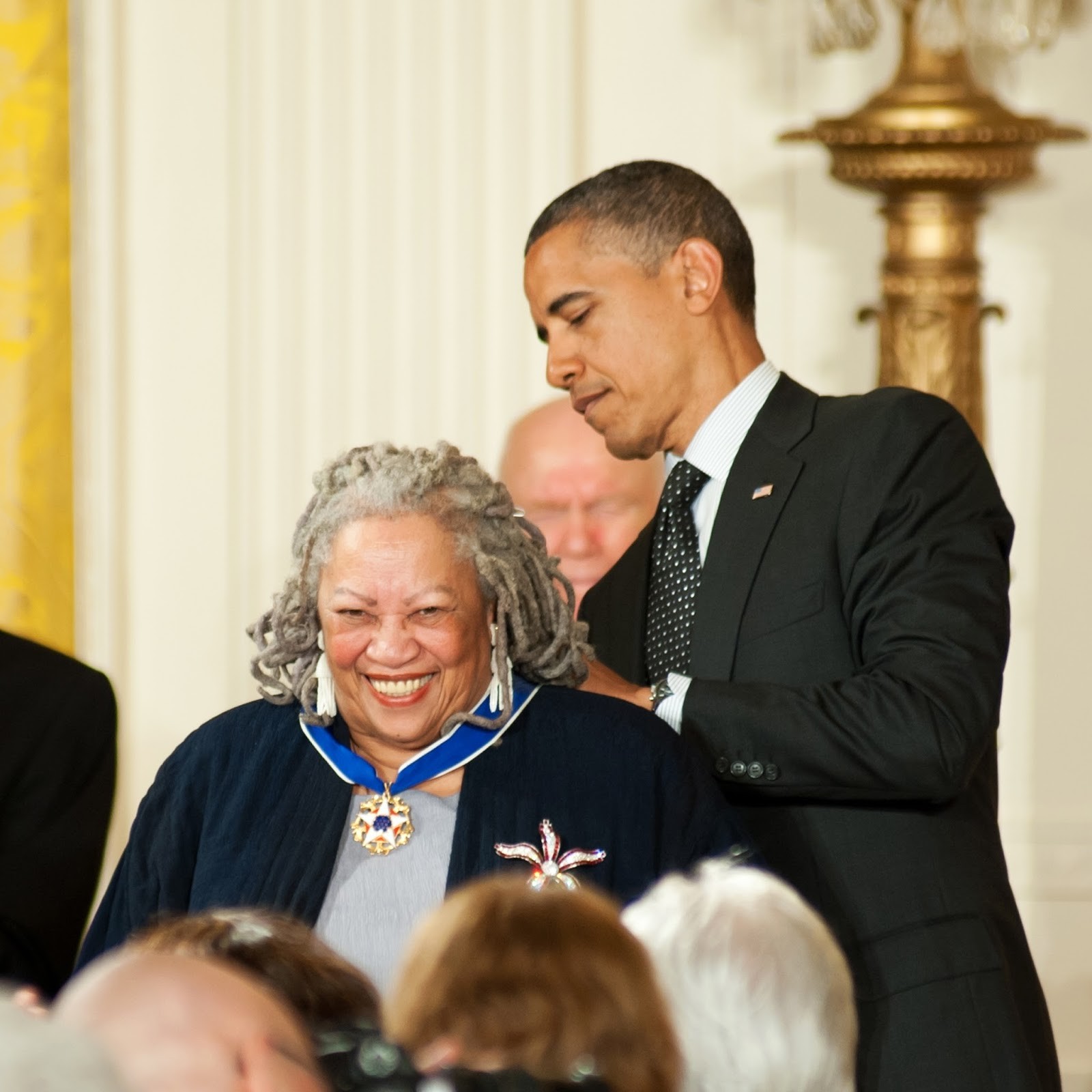 Author Toni Morrison was born Chloe Wofford in Lorain, Ohio, on February 18, 1931, the second oldest of four children. Her father, George Wofford, supported the family by working several jobs at once, and her mother, Ramah, was a domestic worker. In a 2015 New York Times Magazine article, Morrison described her hometown “as a place where “immigrants were everywhere, Italians and Polish people and Jewish people and black people. Some of them came down from Canada. So I never lived in a black neighborhood, and the schools were mixed, and there was one high school. And also we played together.’”

She earned a bachelor’s degree in 1953 from Howard University and a master’s degree in 1955 from Cornell University. After graduate school, she taught at Texas Southern University and then headed back to teach at Howard University. She married architect Harold Morrison in 1958, and the couple had two children. After the marriage ended in 1963, the Solo Mom moved with her two boys to Syracuse, New York, and worked as a senior editor for a textbook publisher and then as an editor for Random House.

It was when she was living in Syracuse that this single mother started writing her first novel, The Bluest Eye. Every day she got up at 4:00 a.m. to write before going to work. Morrison was blunt about this chapter in her life: “I don’t think I did any of that very well,” she told the Telegraph. “I did it ad hoc, like any working mother does.”

Morrison continued to write, earning the Pulitzer Prize for her 1987 novel, Beloved, and the Nobel Prize in Literature in 1993. As described in October of that same year in a Nobelprize.org press release, “Toni Morrison is a literary artist of the first rank. She delves into the language itself, a language she wants to liberate from the fetters of race. And she addresses us with the lustre of poetry.”

Noting that her kids had simple needs during their youth—expecting her only to be competent, have a sense of humor, and be an adult—Morrison always kept her children close. The author wore a heart necklace, carved from butterstone, around her neck as a connection to her son Slade, who died in 2010 at age 45 of pancreatic cancer, and she dedicated her novel Home to him. As the character Sethe says in Morrison’s acclaimed novel Beloved, “Grown don’t mean nothing to a mother. A child is a child. They get bigger, older, but grown? What’s that supposed to mean? In my heart it don’t mean a thing.”

She served as a professor of humanities at Princeton University from 1989 until her retirement in 2006, but life didn’t necessarily quiet down for her. She was still writing in her 80s, and the accolades kept coming; here are just a few: In 2012, she earned the U.S. Presidential Medal of Freedom; in 2014, she was the recipient of the National Book Critics Circle’s Ivan Sandrof Lifetime Achievement Award, which recognizes “outstanding and longstanding work from any sector that affects a book and contributes to American arts and letters”; and in 2015, her 11th novel, God Help the Child, was published by Alfred A. Knopf. As Walton Muyumba writes in his review of the book in the Atlantic, “ . . . her powers are proudly on display in God Help the Child. At its best, this new novel demonstrates that the author is, as she suggested recently in a New York Times Magazine profile, fully capable of writing novels forever.”

As she said about writing during an interview with Terry Gross on NPR’s Fresh Air in April 2015, “It’s the place where I live; it’s where I have control; it’s where nobody tells me what to do; it’s where my imagination is fecund, and I am really at my best.”

Morrison died on August 5, 2019, from complications of pneumonia. The tributes soon came pouring in, including this one from Oprah Winfrey: “She was a magician with language who understood the power of words. She used them to roil us, to wake us, to educate us and help us grapple with our deepest wounds and try to comprehend them.” For Morrison fans both old and new, “The Essential Toni Morrison Reader” compiles reviews of “some of her best—and most essential—books,” and the recently released Toni Morrison: The Pieces I Am, by documentary filmmaker and close friend of the author Timothy Greenfield-Sanders, takes a closer look at the barriers Morrison faced as a single mother and in her career. As Monica Castillo writes in her review of the film, “[T]his documentary will likely help many viewers see just how monumental her accomplishments remain.”