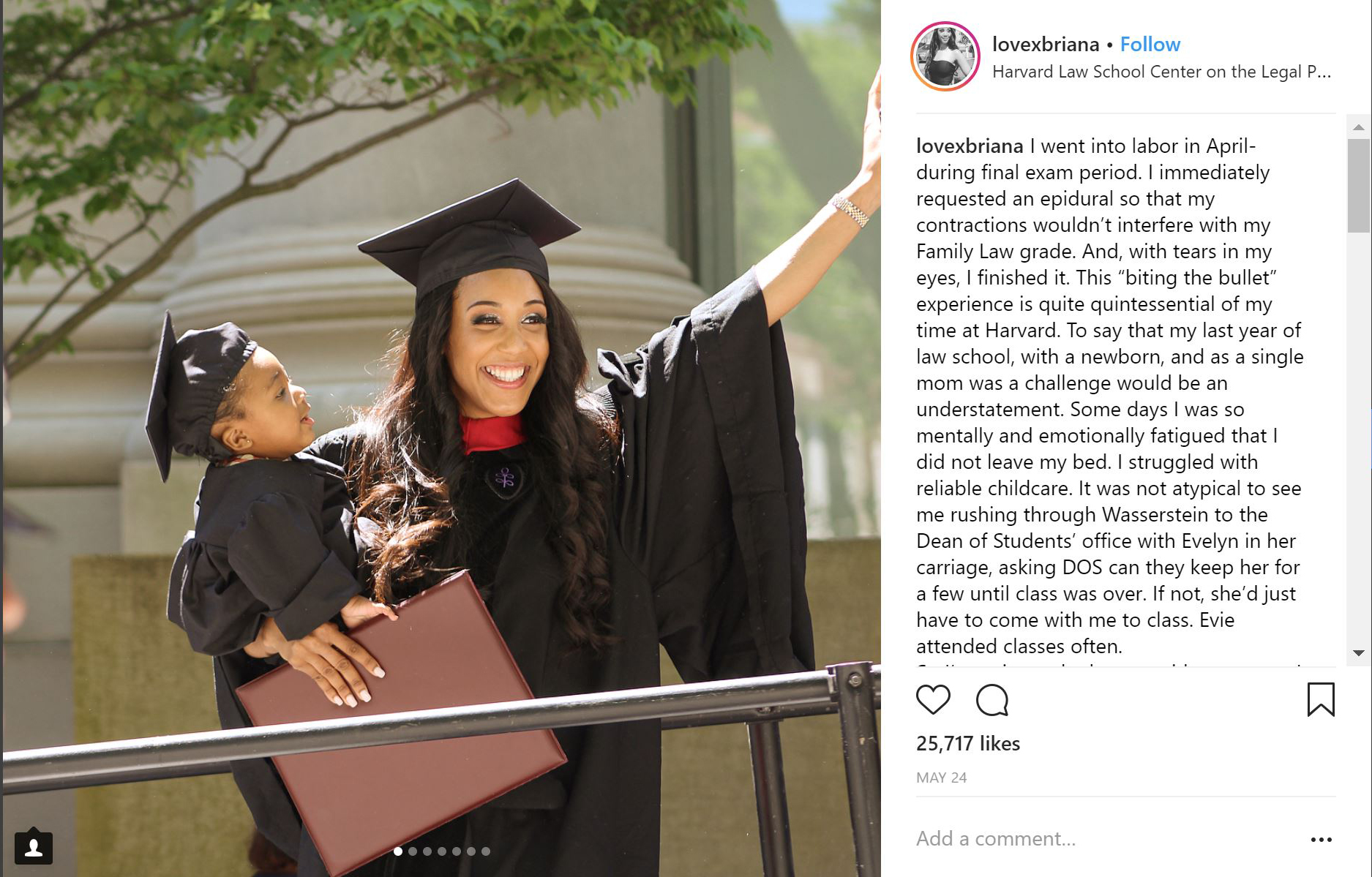 Final exams at Harvard law school are stressful as a rule, but in 2017, Briana Williams experienced another wrinkle: the first-year law student, who was pregnant, started having contractions when she was midway through a take-home exam. She credits an epidural—administered after she packed up her computer and brought it with her to Mount Auburn Hospital in Cambridge—with facilitating her ability to successfully complete the exam.

Looking back, the Solo Mom is sanguine about the experience. “I admit, I wouldn’t have been able to do it without the epidural,” Williams told the Boston Globe in June 2018. “But after the epidural, you’re fine. You’re OK. You don’t feel much.” One year after daughter Evelyn’s birth, and Williams had another occasion to celebrate: her graduation from Harvard Law School. After crossing the commencement stage, Evelyn in her arms, Williams commemorated the milestone with an Instagram post. In the pictures, mother and daughter wear matching caps and gowns. In a heartfelt caption, Williams says, “To say that my last year of law school, with a newborn, and as a single mom was a challenge would be an understatement. Some days I was so mentally and emotionally fatigued that I did not leave my bed . . . I did not think that, at 24 years old, as a single mom, I would be able to get through one of the most intellectually rigorous and challenging positions of my life. It was hard. It hurt. Instagram can make peoples’ lives seem seamless, but this journey has been heartwrenching. However, I am happy to say that I DID do it.”

The post went viral, and Williams, who amassed more than 22,000 likes, was floored. As she told the Boston Globe, “I didn’t know I could have this kind of effect on other people.” The experience proved inspiring. “I would like to be remembered for helping others,” the Solo Mom told EntrepreneuHER. “The best thing that I can do for people is to help them, whether it be by advocating on their behalf or sharing my story to inspire them.”

Part of sharing her journey has meant letting go of the façade many cling to when recording events on social media. Williams hadn’t previously shared such personal musings: “My social media [didn’t] show the nights I stay[ed] up late, all the diapers, my past struggles of raising Evelyn alone,” Williams told NBC’s Today show in June 2018. “I just wanted to share my story because I felt very empowered by it, and I was hoping it would make someone else feel that way as well.”

If that story has been about raising Evelyn on her own, it’s also been about the importance of community. During Evelyn’s first year, friends offered babysitting services so that Williams could save money and channel funds that would have gone into day care toward savings and living expenses instead. Sometimes Williams brought Evelyn to class. “I would email my teachers if I needed to bring Evie, and they would be fine,” she has said. On days when Evelyn wasn’t having a chill, I-can-hang-in-class day, Williams knew she could drop her off in the Dean of Students Office, where Evie was a favorite.

To say that it wasn’t always easy is an understatement, but the Solo Mom is matter-of-fact about life’s challenges. “You can use some things as a crutch, or you can add them to your testimony in a way that can inspire others,” she told Today. For Williams, who has accepted a job at a Los Angeles law firm, where she will be part of the litigation team and also work pro bono cases, the next challenge was the California Bar Exam, which she took in July 2018. (She’ll learn the results in a few months’ time.)

Through it all, Evelyn is her priority—and her joy. An Instagram post from Santa Monica Pier shows a smiling Williams and Evie, enjoying some downtime before the exam. “I realize I’ve been overworking myself, and that’s not good for not only me—but Evelyn either,” Williams writes. “I’ll study later on, but today I’ll spend the day doing things that matter.” After all, one of the people Williams most hopes to inspire is her daughter.

As she wrote on Instagram to Evelyn, “Thank you for giving me the strength and courage to be invincible. Let’s keep beating all their odds, baby.”

College Hall of Fame solo mom in the spotlight