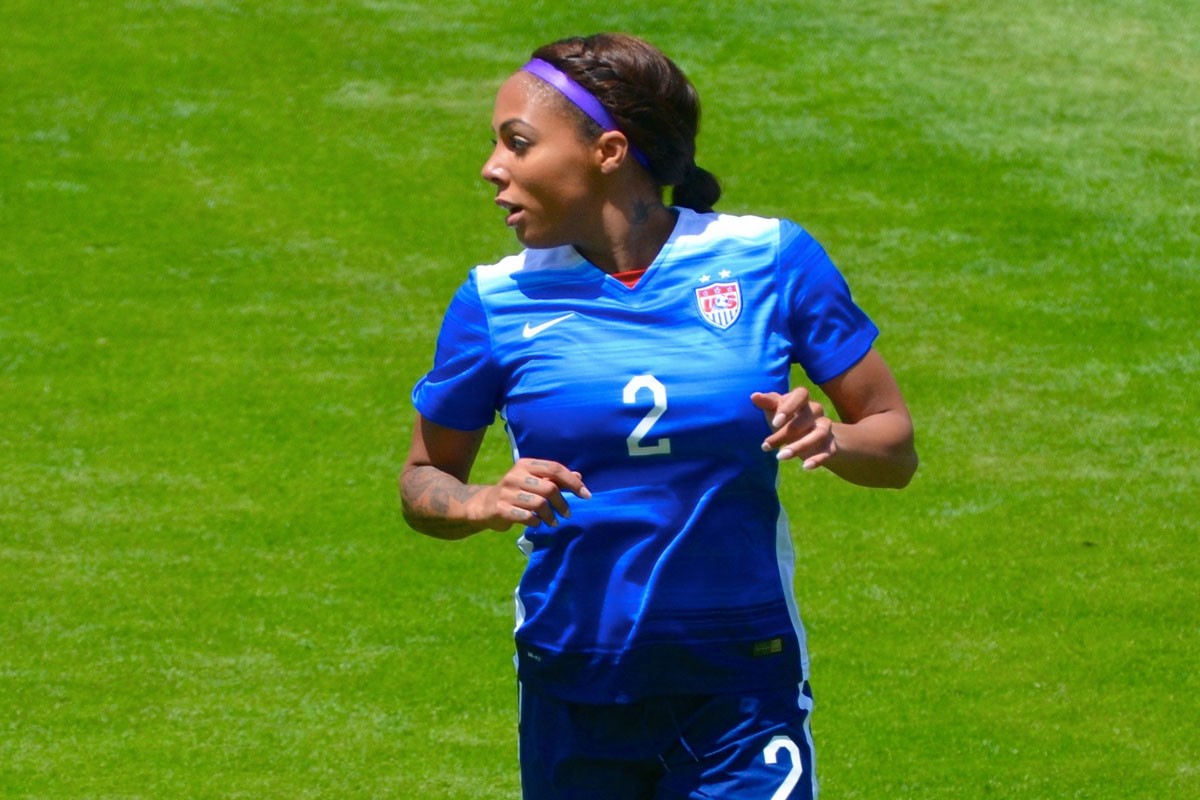 It must be in the genes: Olympic gold medalist and professional soccer player Sydney Rae Leroux Dwyer was born to athletic parents, with her mom, Sandi Leroux, having played third base for the Canadian national softball team, and her father a professional baseball player who pitched for the California Angels in 1986. Solo Mom Sandi raised Leroux; her parents never married, and when Sandi was two months pregnant, they split up.

“It had always been me and my mom since the day I came home from the hospital,” Leroux told espn.go.com in 2015. “We didn’t have anyone.” But Sandi, who never missed one of her daughter’s games and took the graveyard shift at a grocery store so she could be home at 7:00 a.m. to take Leroux to the field, showed the exuberance of two people. She ran with her daughter on the sidelines or stood behind the goal, crying out, “Kick it here! Kick it here!” The proud Solo Mom, who has a large tattoo of her only child on her back, saw her daughter’s potential early on. “She was fun to watch,” Sandi told espn.go.com. “People always talked about her, like: ‘Oh my god. Look at that kid.’”

Sydney is grateful for the belief her mom has always had in her. “My mom did everything she could to allow me to chase my dreams,” Leroux told espn.go.com. “I could have told her I wanted to be an astronaut and she would have found a way to get me to the moon. That’s what she did; that’s what we did with soccer.”

Because of her dual citizenship (her mom is Canadian; her dad, American), Leroux could choose where she wanted to pursue soccer. At 15, she moved to Scottsdale, Arizona, and though she helped lead Sereno Soccer Club to state titles in 2007 and 2008, it was a tough couple of years. She lived with host families, some a better fit than others, and struggled to make connections at Horizon High, where she attended school. It was a lonely time. “I didn’t really have friends aside from the girls on my soccer team,” she recalled in 2012. “I felt like a complete outcast.” She would call her mom, begging to return home, but Sandi, who understood Sydney’s passion for soccer, drew on her own athletic career and experiences to encourage her daughter.

As Sydney remembered, “[My mom] was the one who put me on the plane and was like, ‘You need to do this. If this is what you want to do, this is what we’re going to do, and we’re going to do it together.’ . . . There’s many times I cried and said I want to come home, I don’t want to do this any more, and she’s like, ‘I promise that it will be worth it, that it’s going to be OK and everything will be fine. Just get through it and get to college.”

It was OK. In the years since, Leroux has distinguished herself on both Canadian and U.S. teams. She participated in the ESPN The Magazine Body Issue in 2013 and is currently signed as a forward by FC Kansas City in the National Women’s Soccer League. She was part of the Americans’ winning squads at the 2012 Olympics and 2015 Women’s World Cup, though she will not be participating in the Olympic Games in Rio de Janeiro this year. It’s for a happy reason: an early 2016 tweet from Leroux shared, “Surprise! My plans have changed for this summer. @Ddwyer14 and I are so excited to announce . . .” @Ddwyer14 is Sporting Kansas City forward Dom Dwyer; the couple married in 2015. And the announcement? A baby, due in September.

When it comes to being a parent, Sydney is grateful for the example her own mom has set. The two remain close. After her marriage, Leroux changed her name to Sydney Leroux Dwyer. But on her uniform, the name has remained Leroux. “I’m very proud to be a Leroux,” Sydney explained to espn.go.com. “It’s me and my mom, so to wear that and know what we’ve done together and how she’s brought me here, that’s very cool.”

In this short espnW Originals film, Leroux talks about her journey.