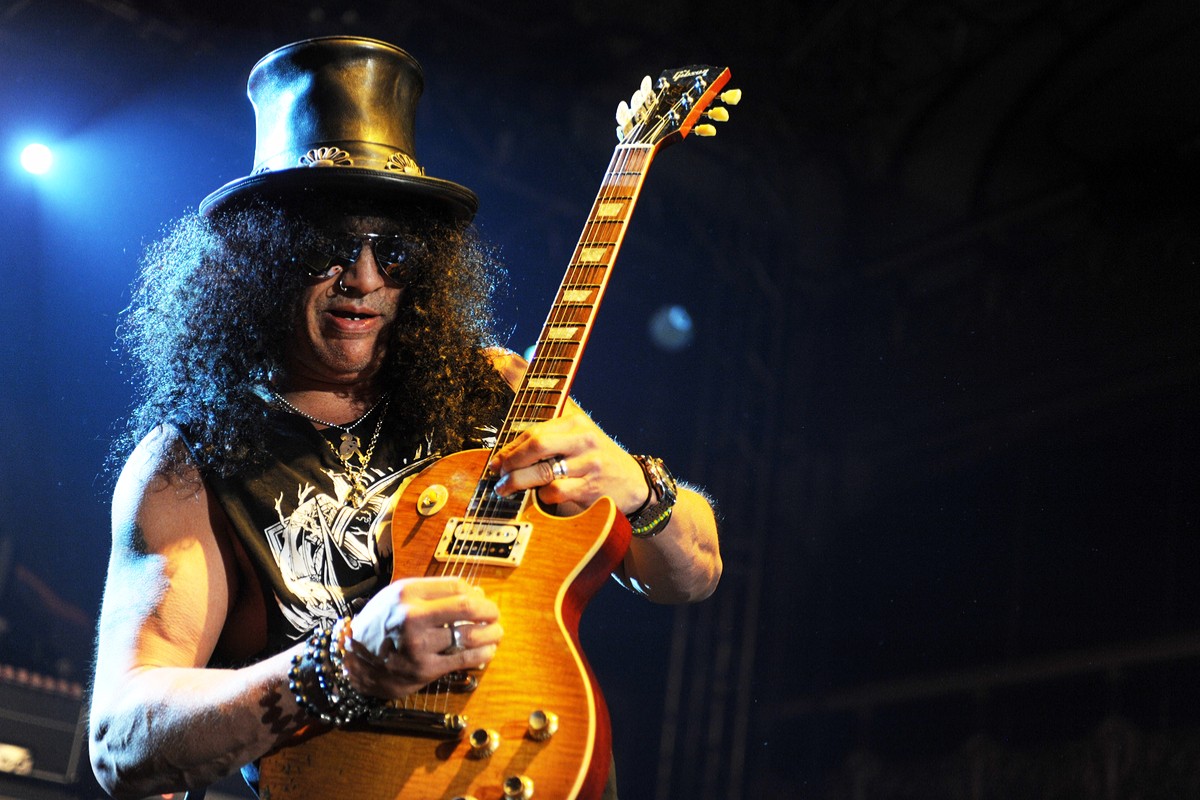 Saul Hudson, better known as Slash, has created some of the loudest yet melodic guitar riffs in rock history. As lead guitarist for Guns N’ Roses, he helped shut the door on the synth-heavy sounds of 1980s pop and ushered in a new era of salacious rock that sold millions of albums for the band. His solos on songs such as “Sweet Child O’ Mine,” “November Rain,” and “Estranged” have sealed his reputation as one of the guitar gods of rock. And his journey into rock greatness started with his Solo Mom, Ola J. Hudson.

He was born in London in 1965. His father, Anthony Hudson, designed album cover art (including Joni Mitchell’s Court and Spark). Ola was a costume designer whose clients included David Bowie and John Lennon. In 1974, Ola and Anthony split up, and Slash chose to live with Ola in Los Angeles. There, he was exposed to the rock-and-roll world through Ola’s work and lifestyle, with Bowie being a regular presence in his home owing to the Thin White Duke’s professional and personal relationship with Ola. Perhaps not surprisingly, as a teenager, Slash became fascinated with playing guitar. He began taking lessons and joined a short-lived band in 1981.

After bouncing around with a few other bands, Slash hit pay dirt in 1985 when singer Axl Rose invited him to join a band that Rose had founded: Guns N’ Roses. The band members earned their stripes playing raucous shows at Los Angeles clubs while writing songs for their debut album, Appetite for Destruction, which, released in 1987, would turn out to be no ordinary debut. Unleashing furious, mean rock and roll with songs such as “Welcome to the Jungle,” Appetite for Destruction evoked the hard-rock sounds of AC/DC, the sex appeal of Aerosmith and the Rolling Stones, and the artistic ambitions of Led Zeppelin being felt in lengthier songs such as “Sweet Child O’ Mine” (which became a fan favorite partly due to its emotional opening riff, courtesy of Slash).

Within the space of just a few years, Guns N’ Roses would become one of the biggest names in music based on the strength of Appetite for Destruction and three more albums released between 1988 and 1991: G N’ R Lies, Use Your Illusion I, and Use Your Illusion II (the latter two released simultaneously). The incendiary songwriting talents of Slash and Rose resulted in songs that ranged from controversial (“One in a Million”) to epic (“November Rain,” which became Guns N’ Roses’ “Stairway to Heaven”). But along with record sales came troubling behavior that included infighting, erratic behavior on the part of Rose, and heavy drug use among band members, including Slash. The band gained a reputation for being unpredictable and unstable, with key members leaving amid a revolving door of personnel changes. Slash’s drug use was so serious that, according to an enduring rock legend, he was actually declared dead for eight minutes after suffering a heroin overdose, an incident he would acknowledge in media interviews years later.

After releasing The Spaghetti Incident? in 1993, an album of cover songs, the core of Guns N’ Roses gradually fell apart, a victim of its own rapid rise to fame, and would slip into an unproductive period that stretched on for years. After Slash departed in 1996, the band was a shell of itself. Slash entered a new phase in his career as a guitar impresario. He formed a band, Slash’s Snakepit, that released albums that sold well in the early 2000s, and then he cofounded the band Velvet Revolver, which kept Slash’s name in circulation and satisfied his fans with more guitar riffs until the band went on hiatus in light of lead singer Scott Weiland’s drug problems. (Weiland died in 2015.) Slash continued to create music, including his first proper solo album in 2010. Even if the music of the 21st-century Slash was not as memorable as the songs he wrote with Guns N’ Roses, Slash had solidified his place as one of the few globally recognized guitar players keeping the flame of rock and roll alive. Meanwhile, Guns N’ Roses, by this point nothing more than a legal name owned by Rose, produced its first album since 1993, Chinese Democracy, in 2008.

In 2009, Slash also suffered a tremendous personal loss when Ola passed away after a battle with lung cancer. In mourning her death through a blog post, Slash described Ola as “the coolest Rock & Roll mom a Rock junkie like myself could ever possibly want to have.” Slash credited his Solo Mom with not only exposing him to music that influenced him but also inspiring him to be an artist. “[S]he turned me on to all different forms of art & the importance of artistic self expression & creative communication thru music & dance from as early on as I can remember,” he wrote. “She really was all things artistic & creative personified & the world is a lesser place without her.”

Her death inspired him to quit smoking, which completed a personal self-rehabilitation that included quitting drugs and alcohol in 2005. Although he had the look of a rock and roller, he kept his name out of the tabloids and lived a relatively calmed life. He even recorded a song for Disney’s Phineas and Ferb: Across the 2nd Dimension. And then, improbably enough, in 2016, Rose, Slash, and original Guns N’ Roses bassist Duff McKagan reunited for a return to the stage. After appearing at the Coachella music festival in April 2016, the reunited core of Guns N’ Roses embarked on the highly successful Not in This Lifetime tour. The notoriously shaky relationship between Rose and Slash managed to stay intact for nearly 100 shows, grossing well in excess of $100 million. Thus energized, Guns N’ Roses announced another tour in 2017.

The 2016 tour introduced the Guns N’ Roses catalog to a new generation of fans and reminded everyone that Slash, with his trademark stovepipe hat, is one of the coolest men in rock. Rolling Stone has ranked him as one of the top 100 guitar players of all time, and his solo from “November Rain” is ranked as one of the top 100 guitar solos ever by Guitar Player. At age 51, Slash is enjoying a glorious second act with the band that made his reputation.