These Eagles Are Making Their Solo Moms Proud 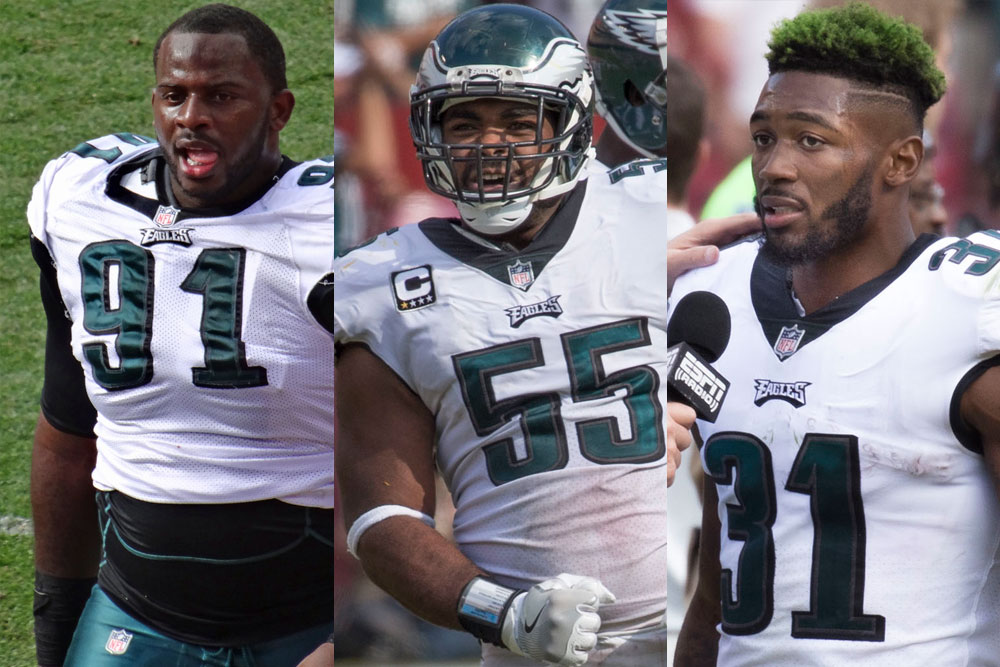 On February 4, 2018, at least three Solo Moms will be donning Philadelphia Eagles colors against the New England Patriots: when Super Bowl LII kicks off, it’s a good bet that Kisa Jackson, Tasha Graham, and Malissa Cox will all be cheering their sons on.

Malissa, for one, will be rooting for son Fletcher Cox. The Eagles’ defensive tackle, who grew up in Yazoo City, Mississippi, is one of four kids Malissa raised as a Solo Mom. Fletcher’s dad wasn’t around, and there wasn’t much money. But Malissa persevered and, in the process, raised a level-headed, loving son: when Fletcher signed a new $103 million contract with the Eagles in 2016, for instance, he didn’t go on a buying spree—with one exception, that is. He did buy something special for his mom. “No new lifestyle changes,” Fletcher told Sports Illustrated shortly after news of the contract broke. “No trips planned, nothing. I guess the most important thing I bought is, my mom got a new car. I got her a car when I got drafted, and then last week I bought her a new one. That’s about it for now.” When Fletcher takes the field on February 4, he’ll likely be thinking about his mom and also older brother Shaddrick, who served as a father figure for Fletcher and died of a heart attack in 2015. “I talk to him before every game,” Fletcher told the Washington Post, referring to an intimate pregame ritual in which he makes the sign of the cross, kisses his fingertips, and points to the sky as a way of honoring Shaddrick. As for the game? He’ll be giving his all. “I just like to work,” Fletcher said. “I don’t want nothing given to me. That big contract, I worked for it. I don’t want to be that guy where people say, ‘Since he got paid, he hasn’t done nothing.’ So I just keep grinding.”

Congenial defensive end Brandon Graham has faced his own set of challenges. Growing up in Detroit’s crime-plagued east side, Graham saw some of his friends drawn down a troubled path; by the time Graham was 12 or 13, a few peers had been arrested for armed robbery and sent away to juvenile detention. “I figured out life was about choices,” Graham said in a 2015 interview with CSNPhilly.com. “Once I started seeing people go to jail, I think that’s what helped me.” The love he got at home—a house shared with his Solo Mom, Tasha; sister; grandmother; grandfather; and uncle—also helped. On either side of the house were vacant lots where Graham played sports under his mother’s and grandmother’s watchful eyes, and Graham has named his Solo Mom as being the most influential person in his life. Indeed, Tasha is tough: diagnosed with leukemia at a young age, she’s a cancer survivor. And she seems to have passed that resilience on to her son. “The City of Detroit is rough,” Tasha has said. “But I feel like if you can survive here, you can survive anywhere in the world.”

For cornerback Jalen Mills, confidence seems to come naturally, though as his mom, Kisa, told The Inquirer in 2016, “I’d like to say I have something to do with that.” Early on, Kisa told her two sons that they had to stand up for themselves no matter the situation. Money was tight, and the little family moved frequently around the Dallas area—“Just us struggling, period”—Mills told the Advocate in 2016. But his Solo Mom was there for him. “[F]or me to see her smile, knowing everything we’ve been through, it really brightens my heart,” Mills said. “All of the hardship we went through—bad times, good times, happy times, sad times. She’s everything.”

On February 4, regardless of the Super Bowl’s outcome, it’s a good bet that these Eagles will be making their Solo Moms proud.