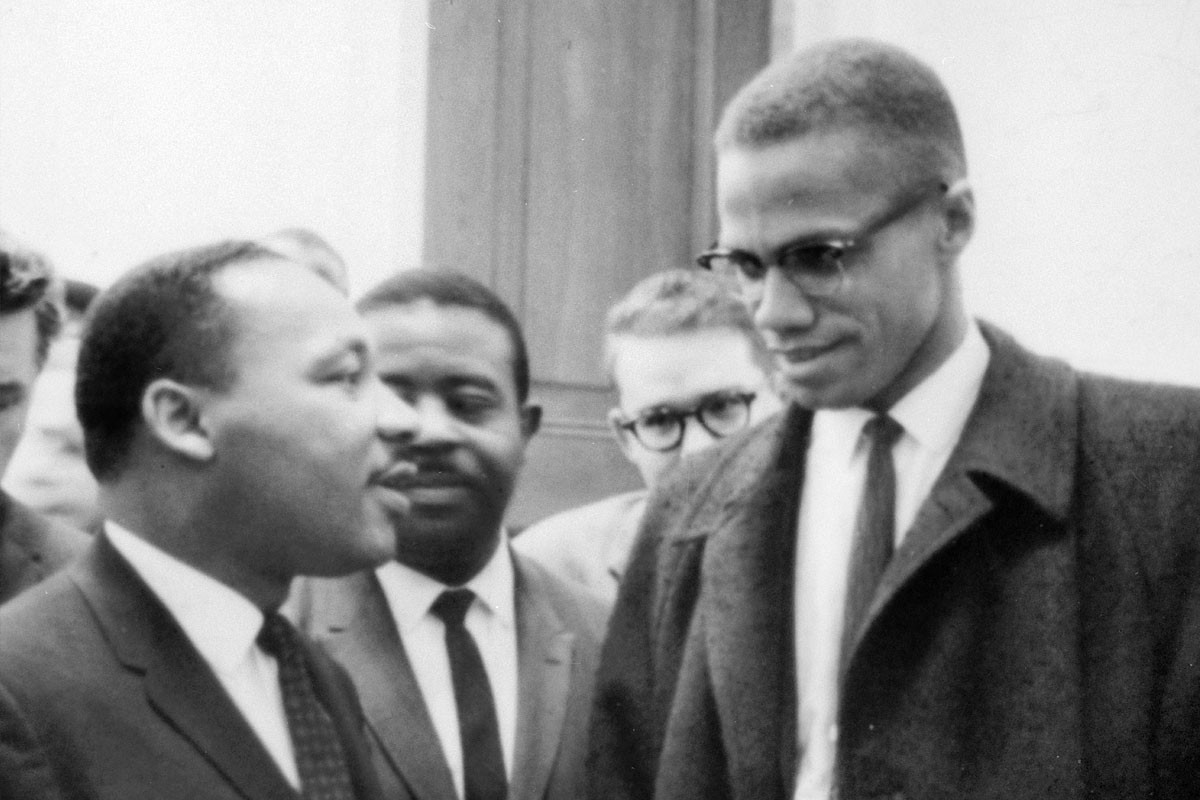 Born Malcolm Little in Omaha, Nebraska, Malcolm X (also known as el-Hajj Malik el-Shabazz) was the fourth of seven children born to Louise Helen and Earl Little. Malcolm’s mother inculcated self-reliance and black pride in her children early on, as a means of navigating racism that was part of Malcolm’s life before he was even born. “When my mother was pregnant with me, she told me later, a party of hooded Ku Klux Klan riders galloped up to our home,” Malcolm remembered in his autobiography. “Surrounding the house, brandishing their shotguns and rifles, they shouted for my father to come out.”

Earl, a Baptist minister, was also the local leader of the Universal Negro Improvement Association (UNIA) in Omaha; when the family encountered continued threats from the Ku Klux Klan, they relocated to Milwaukee and then to Lansing, Michigan. But persecution followed: a local hate society, the Black Legion, harassed the family in Michigan, and when the family home burned to the ground in 1929, Earl believed it to be the work of the group. “The white police and firemen came and stood around watching as the house burned to the ground,” Malcolm X later remembered.

Louise was a light-skinned black, and so was Malcolm, but, aware that light skin could be considered a “good thing” in many quarters, Louise wanted to make sure her son embraced his blackness. In his autobiography, Malcolm writes, “I remember [my mother] would tell me to get out of the house and ‘Let the sun shine on you so you can get some color.’ She went out of her way never to let me become afflicted with a sense of color-superiority.”

When Malcolm was six years old, his father died in what was officially deemed a streetcar accident, though Louise believed her husband had been murdered by the Black Legion. When the Solo Mom was denied the large life insurance policy Earl had purchased to provide for his family in the event of his death, Louise rented out part of her garden to pay the bills and her sons hunted game. It was a difficult time. Several years after Earl’s death, Louise was committed to a mental institution, and her children were split up and placed in foster homes and orphanages. But the fact remains that for seven years, the Solo Mom managed to make ends meet for her family, though she had few resources. As Malcolm wrote about the period immediately following his father’s death, “So there we were. My mother was thirty-four years old now, with no husband, no provider or protector to take care of her . . . children. But some kind of a family routine got going again.”

Malcolm quit school at 15, after a teacher told him his dream of becoming a lawyer was unrealistic and suggested he think about something such as carpentry, instead. He moved to Boston to live with his older half-sister Ella, where he worked on the Yankee Clipper train between New York and Boston. He was smart and he knew it, and felt oppressed by a world that allowed him few options. He wrote that without “the white man’s American social system,” he and his peers “might have probed space, or cured cancer, or built industries.” In 1946, he was arrested on charges of larceny and sentenced to 10 years in jail.

There he read constantly and voraciously, burning through the collection at the prison library in an effort to make up for what he had missed by dropping out of high school. While in prison, he converted to the Nation of Islam; upon his release in 1952, he abandoned his surname, “Little,” which he associated with slavery, in favor of “X,” a tribute to the unknown true name of his African ancestors.

Articulate and an impassioned, gifted speaker, Malcolm X went on to exhort blacks to cast off the shackles of racism “by any means necessary,” including violence. Initially a separatist who hated whites and disparaged Martin Luther King’s nonviolent approach to combating racism, X underwent a radical change in viewpoint after a 1964 pilgrimage to Mecca. He returned to the United States more optimistic that America’s race problems could be addressed peacefully. “The true brotherhood I had seen had influenced me to recognize that anger can blind human vision,” he said. But just as his ideology began to transform, he was assassinated. On the evening of February 21, 1965, Malcolm X was shot and killed while preparing to deliver a speech in Manhattan’s Audubon Ballroom. He was 39 years old and left behind a widow and six daughters.

His legacy continues to resonate today. As Alicia Garza, who helped organize the #BlackLivesMatter movement, told Time magazine in 2015, “What was so powerful about Malcolm was that he was courageous enough to change his mind and courageous enough to admit that he made mistakes. What we are inspired by and hoping to embody is that spirit of curiosity and experimentation and innovation.”

There is no record of the intense grief Louise must have experienced or what she said or thought when her son was killed. Louise Little’s life is not extensively documented; what is known is that her children managed to secure her release from the mental institution decades after she had been committed. What she made of her son’s legacy of transformation and perseverance, during the 26 years after his death and before her own in 1991, is unknown.