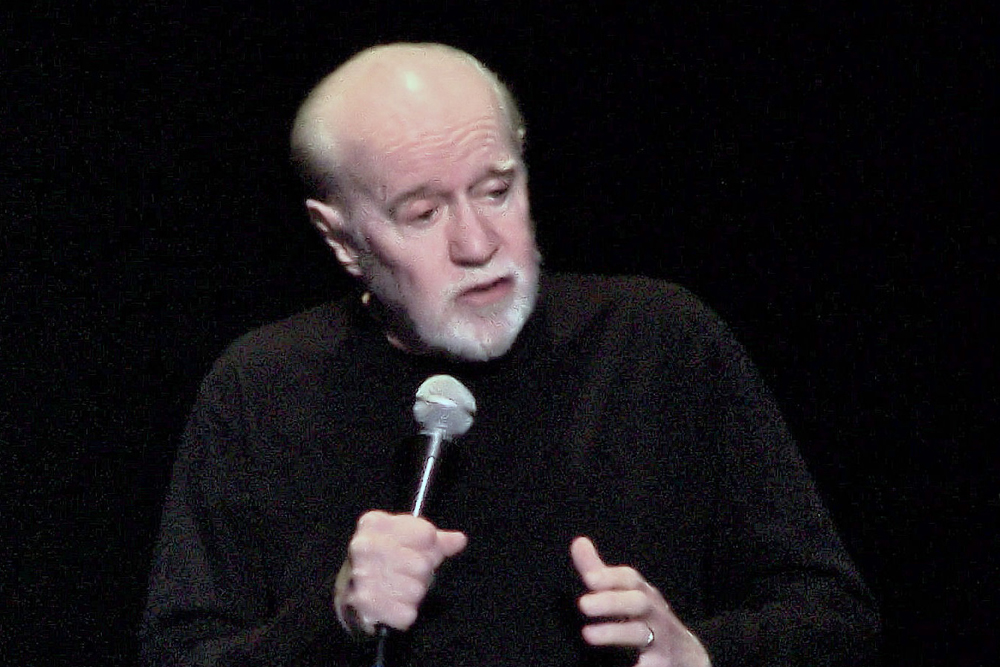 Comedian and social critic George Carlin never toed the line. He didn’t do things the way one was “supposed” to, and he saw that difference as independence, or freedom. His childhood wasn’t necessarily “typical,” either, but he saw that as a strength as well. And he credited his Solo Mom, Mary Carlin (née Bearey), with instilling independence in him at an early age.

“As a child, my father was gone,” Carlin explained in a wide-ranging interview with Psychology Today that took place shortly before his death from heart failure in June 2008. Mary had left her husband, Patrick Carlin, Sr., when George was two months old because of Patrick’s alcoholism. “[My father] drank too much and he was a bully and [my mom] had the courage to take two boys, one of them two months old and one of them 5 years old, and to leave him in 1937 and get back into the business world and get a job and raise us through the end of the Depression and through the Second World War,” Carlin remembered.

Mary worked hard. “She did a great job,” Carlin said, “but she was at work until 7 or 7:30 at night many nights.” Carlin quickly learned to be independent. “I had no grandparents; they were all dead,” he said. “Had no real cousins to play with, and I didn’t give a shit, frankly. I experienced my life in a very happy way, but, what I want to say to you is, I was alone as a child. . . . And I experienced that . . . as freedom, independence, autonomy. And I was brought up on that feeling.”

Carlin has said that the feelings of independence he experienced early on gave him the confidence to forge his own path, even when it was unconventional. “That’s what made me, I think, able to quit school [Carlin dropped out of high school], and go out and try to start my life and career early, because I had that strength.” He saw that strength in his mother, too: “I witnessed it. I mean, what she did was she took us away from [my father] and saved us.”

That didn’t mean the relationship between mother and son always went smoothly. By high school, Carlin had begun failing subjects and running away from home. In a 1982 interview with Playboy, Carlin said that he was running away from his Solo Mom’s plans for his future. “She had it all worked out,” Carlin said. “I would attend a nice college, then get a job in advertising.” Carlin, who had other ideas, “rebelled against her and her values and her plans for my future at every opportunity.”

But Mary, in her own way, contributed to her son’s eventual career path. “By the age of six or seven, I was already doing voices and faces, making my friends and my mother laugh,” Carlin told Playboy. And Mary had a gift for language—a real love for it—that she passed on to her son. “The Irish have a genetic tradition, it seems, an affinity for language and expression,” Carlin told Psychology Today. “And so I got that. The Irish say: ‘You don’t lick it off the rocks, kid.’ It comes in the blood.”

The eighth-grade graduation gift Mary gave her son also proved to be providential. “[I]t was the only graduation I ever had,” Carlin remembered. “[My mom] bought me a tape recorder, a Webcor. And that became a tool for me to put some of these verbal impulses to work. I began to produce little radio shows on it at home. . . . I would do my make-believe announcer. I did newscasts, I did sports. A lot of the things that I ventured into professionally in my first stage of comedy I was doing on that tape recorder. . . . So my mother—in spite of what she wanted me to do for her, to be a great reflection on her, go to college and be a businessman—she knew this was something I needed. And she got that for me, and it helped accelerate the beginnings of my putting this dream together that I had. I was 14 when I got that tape recorder. . . . And she was smart enough to get me one. That’s an important part of my development.”

Carlin went on to forge his own path, racking up three courts-martial during a stint in the Air Force, then going on to hone his sharp, observational humor and opinions on controversial topics. Perhaps his most notorious performance was a routine titled “Seven Words You Can Never Say on Television” (which helped lead to a Supreme Court decision about regulating speech on broadcast television), but the comedian also played the role of Mr. Conductor on the PBS show Shining Time Station; in the 1990s, he appeared in a weekly Fox sitcom, The George Carlin Show, and he narrated the American version of Thomas the Tank Engine & Friends. Carlin also performed regularly as a headliner in Las Vegas. If his career was diverse, the connection, always, seemed to be that love of words. During an appearance on Inside the Actors Studio, Carlin said that what turned him on was “reading about language.” And his only child, Kelly Carlin, said in a 2015 interview with the Los Angeles Times that her father, rather than spilling his guts onstage, would present “highly perfected, highly constructed essays memorized and presented to the audience.”

And always, there was that keen wit, which grew out of and then eventually evolved away from those early days of just making silly faces for his Solo Mom. “I do remember the first time I ever made my mother laugh,” Carlin told Psychology Today. “My mother laughed fairly frequently. But I knew the difference between her social laugh and her really spontaneous laugh when she was caught off guard. . . . And I said something to her, and I saw that in her and it registered with me. . . . It meant I had said something witty. I didn’t clown, I wasn’t making a face or standing in a funny angle. I had said something witty.”

Carlin took that wit and made his own way.