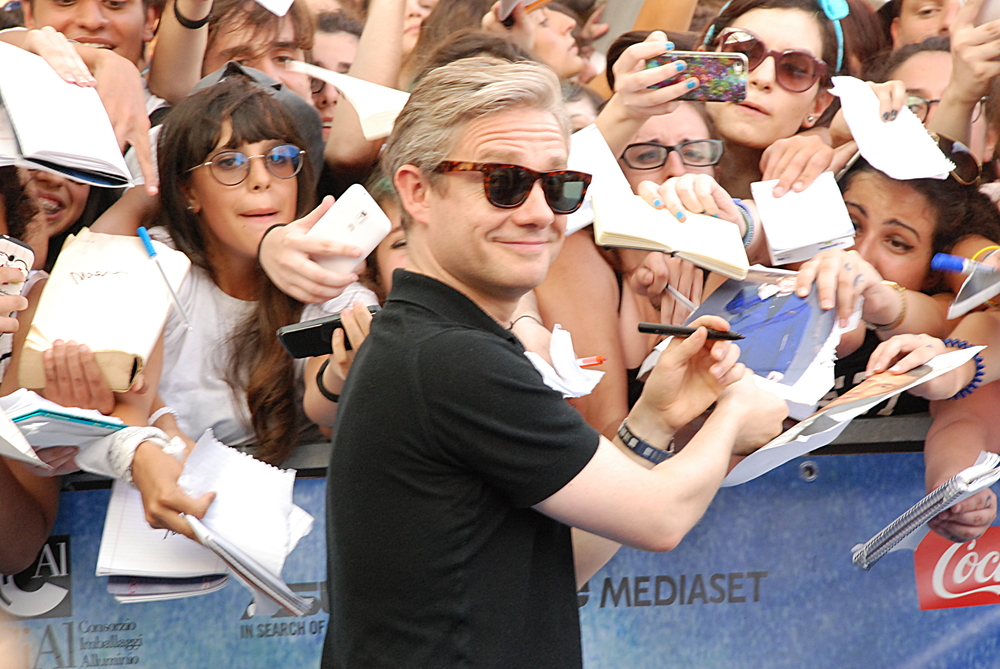 It could be said that English actor Martin Freeman is fulfilling his mother Philomena’s dream. Philomena herself had always wanted to be an actress. Instead, she pursued a different path: she and Freeman’s dad, naval officer Geoffrey Freeman, had five children before they separated. Martin, the youngest of the five, went to live with his father after the split. But when Martin was 10 years old, Geoffrey died of a heart attack, and the boy returned to live with his mom and stepfather, James.

If that sounds challenging, Freeman would beg to differ. “I have to say I had a very happy childhood,” the actor told the Irish Times in 2006. “I would be really laying it on if I said otherwise. People say: ‘You had to contend with a lot.’ But it is all relative. Though we weren’t thieving from bakeries, we didn’t have much money. But we did have love. I was really supported when I said I wanted to go to drama school. I know a lot of people who were kicked out of the house and told they were poofs.” In fact, creativity was encouraged. “My dad was a painter, we all painted. Mum had been—she’d wanted to be an actor, when she was younger; life took over, the 1950s took over. But you know, we all knew we were allowed,” Freeman said to the Financial Times in 2016. “That was a big thing.”

With Philomena’s support, Freeman thrived at London’s Royal Central School of Speech & Drama. The former Solo Mom also shared with her son her Roman Catholic faith. “I’m one of the few people I know who believes in God,” Freeman matter-of-factly said to the Independent in 2012. And as he told the Scotsman in 2009, he doesn’t have much patience with reflexive, uninformed atheism, either: “When people have a go at organized religion, it’s not necessarily people who have been reading Chomsky and come to this great idea by a lot of research.”

This direct manner is typical of the actor. Keenly intelligent and passionate about his interests (he pursues his love of music through an extensive vinyl collection), Freeman isn’t afraid to say what he thinks. An interviewer once described him as “searingly intelligent, angry, direct, caustic, lefty, sweary, as stunningly far from Tim [Freeman’s character on the British version of the television series The Office] as you could get.”

And yet the actor has excelled in his interpretation of Decent Everyman roles, from that of Tim Canterbury on The Office to Bilbo Baggins in The Hobbit film trilogy, Dr. John Watson in the crime drama television series Sherlock, and now, most recently, CIA operative Everett K. Ross in Marvel’s Black Panther. (Ross also appeared in Captain America: Civil War.)

Whether that amiable nature comes naturally or no, Freeman knows how to tap into it—in real as well as in reel life. He is amicably separated from actress Amanda Abbington, with whom he has two children. And overall, he’s happy with his lot. As he told the Scotsman, “Actors are people who are doing a job they want to do, which isn’t the case for many of the people who watch what we do. We are doing something we want and we get paid handsomely; why behave like an arsehole?” Philomena, one thinks, couldn’t have said it better.