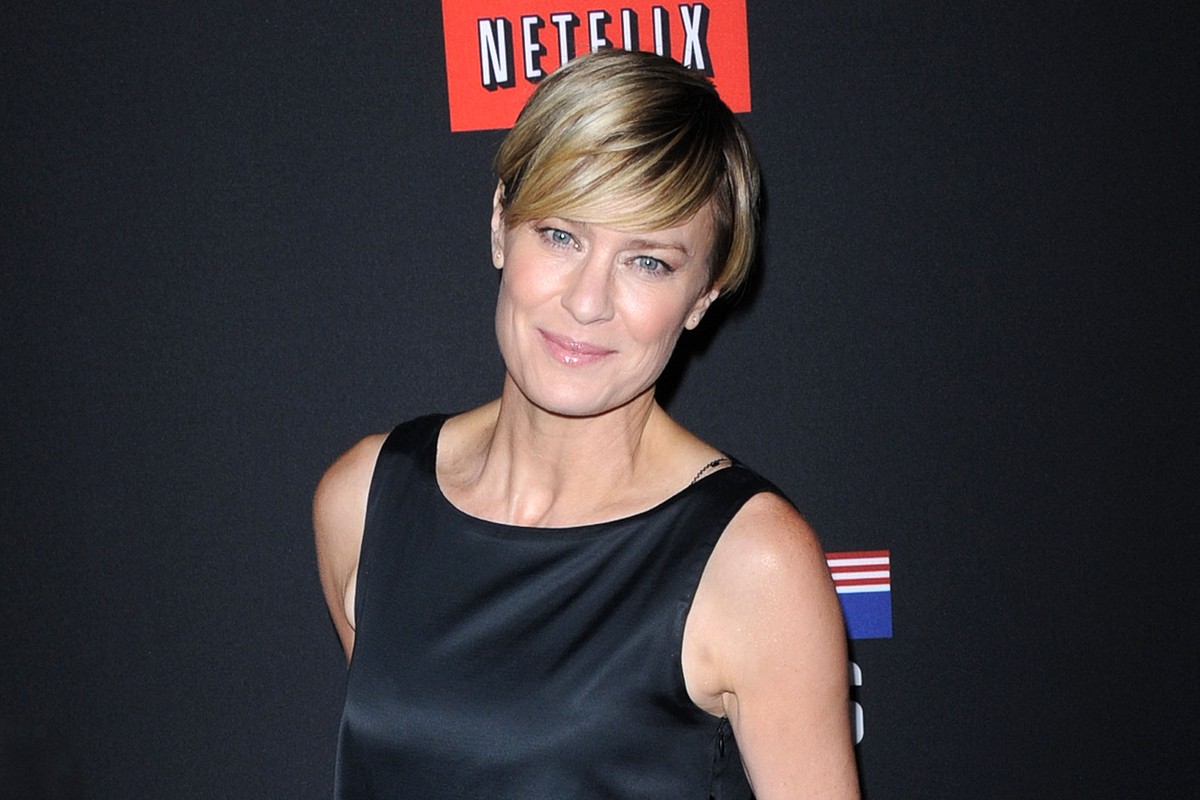 The pundits were saying actress and director Robin Wright was in the lead to win Best Actress in a Drama Series at the 2016 Emmy Awards, an award that went, instead, to Tatiana Maslany for her role in the sci-fi series Orphan Black. It was the fourth year in a row that Wright received the nomination for her work in the Netflix original series House of Cards; in the show, Wright stars as Claire Underwood, the calculating, manipulative wife of politico Francis Underwood.

Married to actor-director Sean Penn from 1996 to 2010, the Solo Mom knows something about persistence. In 2014, Wright told the Telegraph that one of the reasons the marriage lasted as long as it did was because the couple was trying to stay together for the sake of their kids, Dylan and Hopper. “Divorce in and of itself, and with children, is devastating. . . . One of the reasons why we got back together and broke up so much was trying to keep the family together. If you’ve got kids, it’s a family, and you try again, and you try again. We did that for a long time.”

During her marriage to Penn, Wright continued to act, though she was not always in the public eye. For years best remembered for her early starring roles as Princess Buttercup and Jenny in the films The Princess Bride and Forrest Gump, respectively, she’s since built a solid career as a character actress. House of Cards has in many respects pushed her back into the limelight. “I’m a late bloomer,” Wright told the Telegraph. “I used to lie in wait and hope to see what roles would come in. But my new ambition is to go out and find what I want. I also want to direct more. I totally have the bug now.”

Of her marriage to Penn, she told Vanity Fair in 2015, “I grew up very fast as a young girl, but I grew slowly into my womanhood. We were learning as we were going along. We agreed as parents that we’d not work at the same time, so that one of us was always with the kids. He was making more money than I was at the time, so it was a simple decision: ‘You go work—I’ll stay with the kids.’ And we got along great as creative people. Acting together, him directing me [in The Crossing Guard in 1995]—that was great.” The couple put their kids first, moving to Northern California so that they could raise Dylan and Hopper outside the harsh tractor beam of celebrity. And Wright believes that the years together had meaning. “[W]e were together not only to have our beautiful children but to learn how to love . . . for the next time around, the right way. And then, what I’m looking for in people now is kindness.”

Wright, in this new season of fame, has been finding ways to put that kindness out into the world. In 2014, she launched Pour Les Femmes, a “give-back company” that sells a sleepwear line and donates part of the proceeds to African women who are victims of violence.

And if Claire Underwood, the character Wright plays on House of Cards, might not share those altruistic impulses, Wright sees her character somewhat differently. As she told Vanity Fair, “I can’t see [Claire] as evil and cunning. To me, she’s utilitarian and efficient.” Even though Claire Underwood hasn’t yet brought this Solo Mom an Emmy, Wright is determined to conduct herself with grace. As she told Harper’s Bazaar in April 2016, “I think my mission statement is: you don’t have to be a bitch to be powerful.” Laughing, she added, “I’m trying to stick to that.”

You can see more of Wright as General Antiope in the just-released blockbuster Wonder Woman, directed by Patty Jenkins. In the film, Wright plays aunt and mentor to Diana Prince (aka Wonder Woman), training her to become a fierce fighter. According to Elle magazine: “In case you didn’t know, Robin Wright is in this movie, and she is magnificent.”