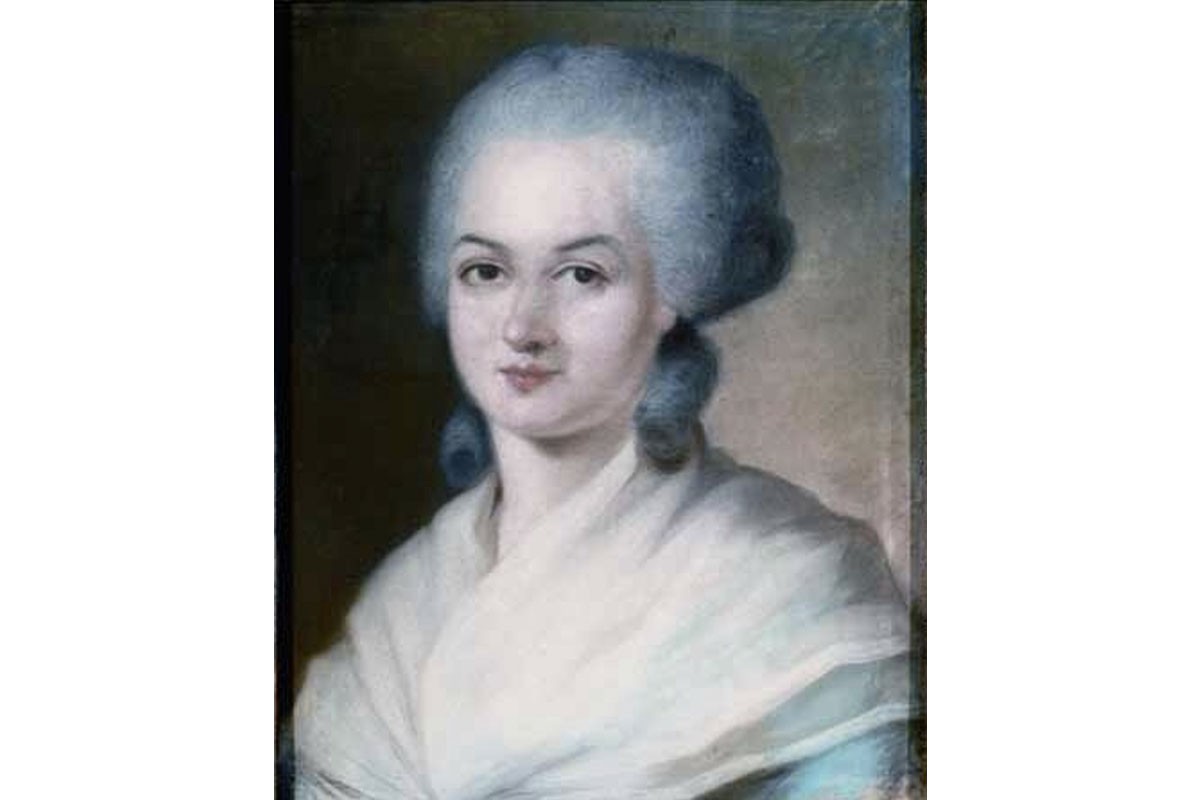 French playwright and political activist Olympe de Gouges was born Marie Gouze in southern France. Though she believed herself to be the illegitimate daughter of Jean-Jacques Lefranc, the Marquis de Pompignan, he rejected her claims, and the repudiation may well have helped shape her worldview: in later years, de Gouges was a passionate defender of the rights of illegitimate children.

Strong-willed and unafraid, de Gouges became a Solo Mom when her husband, Louis Aubry, died in 1766, not long after their marriage. It had not been a love match: in her semiautobiographical novel, Mémoire de Madame de Valmont contre la famille de Flaucourt, she explains, “I was married to a man I did not love and who was neither rich nor well-born. I was sacrificed for no reason that could make up for the repugnance I felt for this man.”

By 1770, Gouze had changed her name to Olympe de Gouges and moved to Paris with her son, Pierre. She vowed never to marry again. As Marie Maclean says in her book The Name of the Mother: Writing illegitimacy (Routledge, 1994), Olympe “refused not only to remarry but even to call herself by her husband’s name, and chose to live as a single mother under a name of her own devising, refusing the norms of patriarchy.”

If in that time and place, de Gouges’s choices marked her as “other,” even dishonorable, they also probably informed her desire to change the status quo. In Paris, she became an advocate for the selfhood of women, blacks, and children. She was among the first to demand the emancipation of slaves; the rights of women to divorce or have children out of wedlock; and the protection of those who could not protect themselves, including orphans, the poor, and the unemployed. She defied social convention in every way, and though self-taught, she wrote prolifically. Some of her writing took the form of plays: in 1786, de Gouges toured, with her son, in an amateur production of her play Les Amours de Cheérubin (published as Le Mariage inattendu de Chérubin). But perhaps the best-known of her works is The Declaration of the Rights of Woman (often referenced as The Declaration of the Rights of Woman and the Female Citizen), in which de Gouges states, “[W]oman has the right to mount the scaffold, so she should have the right equally to mount the rostrum.”

She wrote The Declaration of the Rights of Woman in 1791; two years later, she herself was beheaded during France’s Reign of Terror, the only woman to be executed for her political writings. Though she had at first embraced the Revolution, de Gouges became disenchanted with its violence and the fact that women had been denied equal rights. In The Declaration of the Rights of Woman, she cries out, “Oh women! Women, when will you cease to be blind? What advantages have you gathered in the Revolution?” Essentially a pacifist, she also argued against the execution of the deposed French king; her own arrest came in July of 1793, after she published a poster demanding that people be given a choice between a republic, a federal government, and a constitutional monarchy. Found guilty of sedition, de Gouges was executed by guillotine in November of the same year, just 18 days after Marie Antoinette.

According to writer and historian Olivier Blanc, de Gouges’s son, General Pierre Aubry de Gouges, went to Guyana with his wife and five children after his mother’s execution. He died in 1802, too soon to see the positive effects of his mother’s legacy. In fact, immediately after her death, de Gouges was widely discredited: the Feuille du Salut Public taunted that “[s]he wanted to be a statesman. . . . Apparently the law punished her for forgetting what is becoming for her sex.” And then for years she was seemingly forgotten, but recent scholarship has recognized her legacy and the conversation de Gouges’s efforts started on the subject of women’s rights. In 2004, the junction of the Rues Béranger, Charlot, Turenne, and Franche-Comté in Paris was declared the Place Olympe de Gouges.