Chrissie Hynde: “How Can You Retire From Being Yourself?” 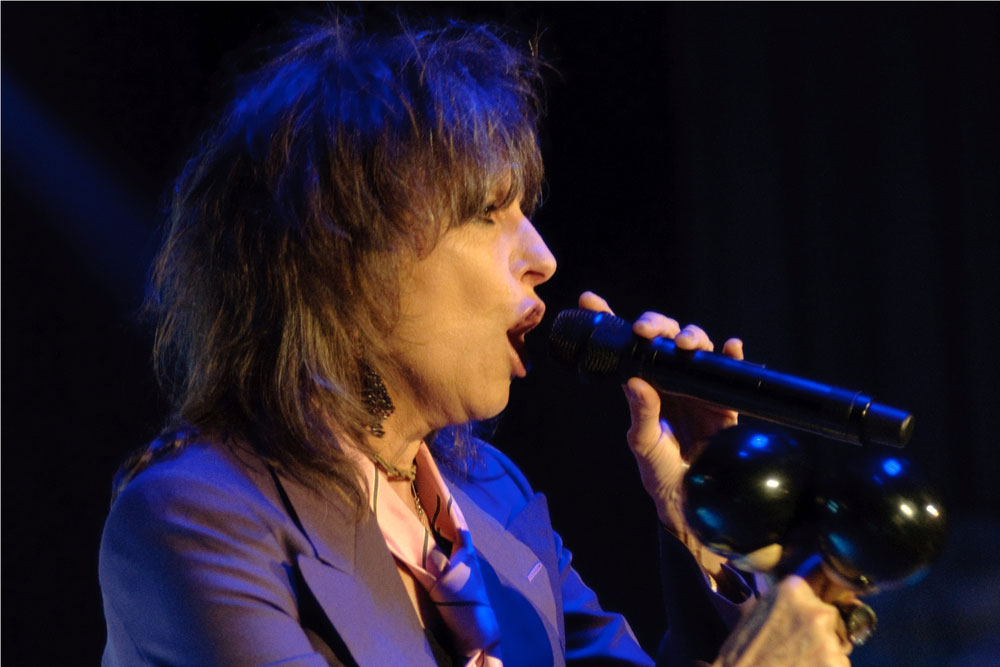 American musician Chrissie Hynde doesn’t pretend that parenting solo is easy. But she’s a pragmatist and supremely comfortable in her own skin. “I would rather be single than be in conflict with someone,” she told the Guardian matter-of-factly in 2014. Hynde, best known as a founding member of the rock band The Pretenders, is no stranger to the wars of love. She has two grown daughters, Natalie and Yasmin; the girls’ dads are Ray Davies of the Kinks and Jim Kerr, lead singer of the band Simple Minds, respectively. In her autobiography, Reckless: My Life as a Pretender (Anchor, 2016), Hynde does not shy away from the ill-fated nature of her two-year relationship with Davies. Their union was tempestuous: she once threw his clothes out of a hotel window, to be picked up by a passerby before they could be retrieved. Hynde married and then divorced Kerr, and then subsequently married and divorced artist Lucho Brieva.

The ups and downs of love inform her work. As she told the Telegraph in 2014, “Your emotional concerns never change. That’s why there’s millions of love songs made out of just twelve notes.” In her 2014 solo album, Stockholm, Hynde explores themes of desire, heartbreak, and loss, and she’s the first to say the songs are intensely personal. “I’m not a poet, I’m not a storyteller,” she said. “I just kind of get stuff off my chest. These songs just tumbled out.”

And though female rockers from Katy Perry to Karen O have been influenced by Hynde’s work, the rocker is disinclined to take that credit. “I’m not a figurehead for anything,” Hynde told the Telegraph in 2010. “I was a single mom with two kids. What else was I going to do? It was either be in a band or be a waitress.” And she has her theories about why, decades into her career, she still gets such pleasure from being part of the music scene. “[M]aybe I’ve got that band mentality because I am such a solo person in my real, true, home personal life,” she has said. “I am very much alone most of the time. I go to films alone. I go to restaurants alone. I live alone, travel alone, and I get through my life alone. So when I’m in a band, I’m just so grateful. It’s like being in an old person’s home and someone brings some farm animals in. You’d be so happy just to stroke a goat. That’s kind of what I’m like!”

Hynde’s delight in animals extends beyond simile. She’s a high-profile animal-rights activist, having worked with groups such as PETA (People for the Ethical Treatment of Animals). If her stance can be uncompromising—Hynde writes in her autobiography that when she stopped eating meat, she “started to think of meat-eating as a very weird practice and secretly regarded meat-eaters with distaste, almost contempt”—her motives are sincere. In an interview shown on Swedish and Norwegian television in October 2014, the musician called abstaining from meat “common sense . . . I live by my principles.”

Like mother, like daughter: in 2013, environmental activist Natalie was arrested at an anti-fracking protest that took place at a rural drilling site in West Sussex county in the south of England. The site had been earmarked for fracking; Natalie and her boyfriend, Simon “Sitting Bull” Medhurst, superglued their hands together in a “human lock” by the gate to the proposed drilling entrance. Natalie has said that she began participating in protests because of the “inspiration” of her mom.

It can be assumed that Hynde is one proud mama. And it can be assumed that she takes pride in her music. The career that took off in 1979 when Hynde and Pretenders bandmate James Honeyman-Scott wrote the group’s first hit, “Brass in Pocket,” has spanned decades and shows no signs of stopping; The Pretenders’ 10th studio album, the 2016 effort, Alone, got favorable reviews, with the Guardian noting, “Hynde is magnificent here—unapologetic and deferring to no one.”

Indeed, the rocker has no plans to hang up her guitar. As she told the Telegraph in 2014, there was just one time she (briefly) had her doubts about continuing life as a musician. “It was after a gig, on tour in the States, and . . . I was thinking to myself, ‘well, who’s gonna want to see a forty year old woman running around the stage with a guitar?’ . . . [but then] I thought, ‘I’d wanna see that!’” Unaffected and self-assured, the musician and Solo Mom continued: “How can you retire from being yourself? You just keep doing what you’re doing.”

Hall of Fame solo mom in the spotlight Music