Dream Big but Plan for the Detours 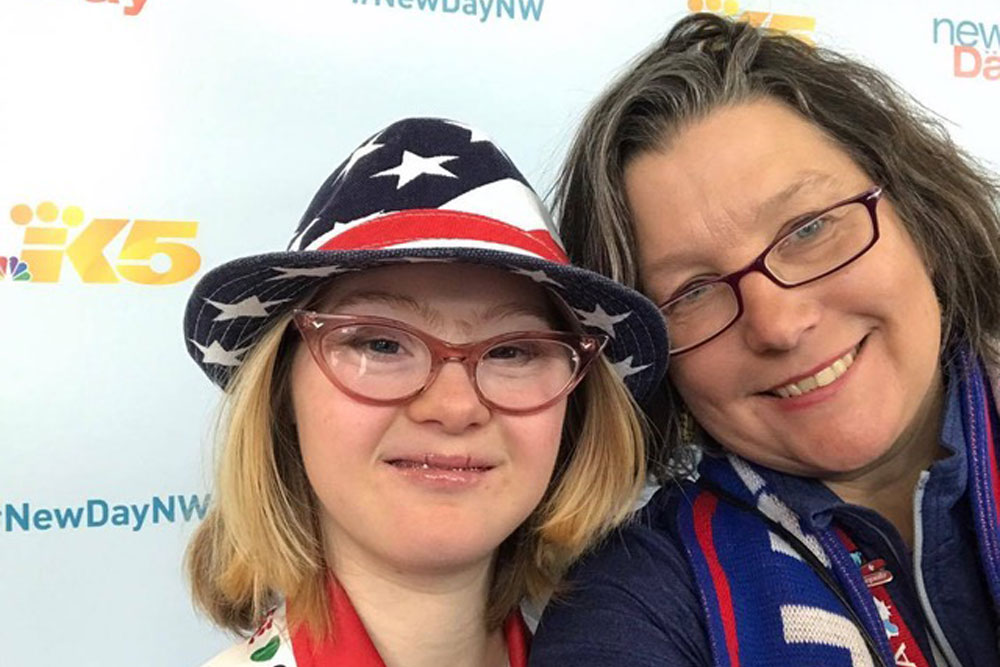 In many ways, Virginia Wade is a typical 16-year-old. The high school freshman keeps busy with skiing and gymnastics; she likes to hang out with her siblings and friends, shop, watch TV, and get her nails done; she dreams of going to college in a few years; and she loves Michelle Obama, the Broadway hit Hamilton, and the color pink.

Virginia is also a girl with Down syndrome who is learning American Sign Language, writing her first musical, and just happens to have won fourth- and fifth-place medals at the Special Olympics World Winter Games in Austria in March.

Virginia was one of only 22 skiers on the U.S. women’s alpine team and among 2,700 athletes from 110 countries who qualified for the global event. That’s some stiff competition, but Virginia is one determined girl who is not shy about her gifts.

In a recent interview conducted on Facebook chat, Virginia tells me that she started skiing when she was four, and her 19-year-old sister, Katie, is her coach. Her favorite part of skiing is zooming down the hill and drinking hot cocoa. And she is really talented.

Asked to describe the process that landed her a spot on the team, Virginia replied, “It’s like being a princess; I was born into it.” She followed up this quip with, “I had to ski a lot, and my mom needed to say I could go.”

Mom is Amy Sue Martin, who tells me during a later conversation that what it took to get Virginia to the Olympics was waking up early and getting all four of her children (Katie, Virginia, and twin boys Cedric and Duncan, 10) out of the house and on the ski slopes.

But the journey actually began from the moment Virginia was born. Martin says that Virginia owns her Down syndrome. They’ve always been totally open about it because it’s part of who Virginia is, and that’s OK.

“In all honesty, it’s been 16 years of constant care and loving and meeting Virginia where she’s at. The Olympics go back to her first steps and her first falling, and developing all the things she needs to lead a full life. This is not something we did for Virginia; it’s something we do together,” Martin said.

Martin, who has been separated from her husband for 18 months and is in the midst of divorce mediation, said that she has always functioned as a Solo Mom. Her estranged husband traveled up to 200 days per year for work until six months ago, when he took a nontraveling position, so she was single parenting while he was “celebrity parenting.” Martin has worked on and off as a teacher since Virginia was born, and though she is home full time now, she put her skills to good use homeschooling her eldest daughter for high school and Virginia for middle school. Virginia now attends high school in Seattle.

Asked how she manages it all, Martin said, “For one, you need to be able to take turns and focus on one child at a time sometimes to make sure that each one is getting what they need. And you need to be flexible. I tend to be able to handle a pretty full plate, but I don’t blame myself if something falls off. I hope I’m passing that message onto my kids. I tell them to dream big, but plan for the detours.”

In discussing the musical that Virginia is writing, Martin tells me in an offhanded way that the idea was formulated when she and her children hiked 1,600 miles of the 2,200-mile Appalachian Trail from Georgia to Maine in 2013.

“She loves musicals but doesn’t necessary have the skill set to be able to write one, but we still watch them and talk about writing songs and creating little ditties,” Martin says. “When we were on the trail, it occurred to me and to Virginia that we had the opportunity to write a musical. We had the time. We started writing songs that were about her, and her trail name was Tutu, so that’s the name of the musical.”

Martin says that the project won’t be done for a long time, and they need to bring in people to help, but they have a great framework. Virginia got an injection of star power to her musical when she appeared with actor Josh Peck in a video (part of the Special Olympics and Microsoft “We Are More” campaign). The young actor worked with Virginia on a scene and arranged for one of the songs to be performed by a duo from a London recording studio. In return, the indomitable Virginia gave Peck his first ski lesson.

On the heels of her victories in Austria, Virginia has set her sights on the Special Olympics USA Games in the summer of 2018, which are being held in Seattle. Martin is working with the organization to get a gymnastics program in Washington so that Virginia and others can compete. If anyone can accomplish that goal, it’s Martin, who is a ball of energy and a ceaseless champion for her children.

“Virginia has something that is unique. She’s very persistent; she’s very driven. Being in a family of dreamers, she sets her sights high. Other kids might give up, but because she is passionate and persistent, Virginia’s able to accomplish things she wants to do. I don’t know where she gets it from.”

Here’s a clue: for the next seven weeks, Martin will be hiking El Camino de Santiago in Spain—alone. The trip was a Christmas gift from her eldest daughter, Katie, who enlisted Martin’s friends to help finance the adventure and to help care for Virginia, who will be at home with her brothers. No doubt the independent Olympic veteran will be just fine without her mom. Before we signed off from our Facebook chat, I asked Virginia if there was anything else she wanted me to know: “I am famous, beautiful, nice, positive, competitive, honest, good, happy, loving, flexible, smart, brainy, and I like pink.”

Update: Nine months after this article was published, ESME learned that Virginia would be representing her home state of Washington in gymnastics at the Special Olympics USA Games being held in Seattle July 2–8, 2018. For those watching her compete, Virginia soared—both literally and figuratively! She not only came in first in her division in the all-around competition with a score of 68.90 but also placed in each individual event: third place on the uneven bars (17.93); second place on the floor exercise (15.75); third place on the vault (16.45); and first place on the balance beam (18.03). When asked about her all-around performance, she told the Seattle Times it was the cheering that spurred her on. “It makes me feel really great,” she said.

Are you a Solo Mom whose child has special needs? We have ESME Tribes and a closed Facebook group called ESME Special Needs where you can find additional support and connection.