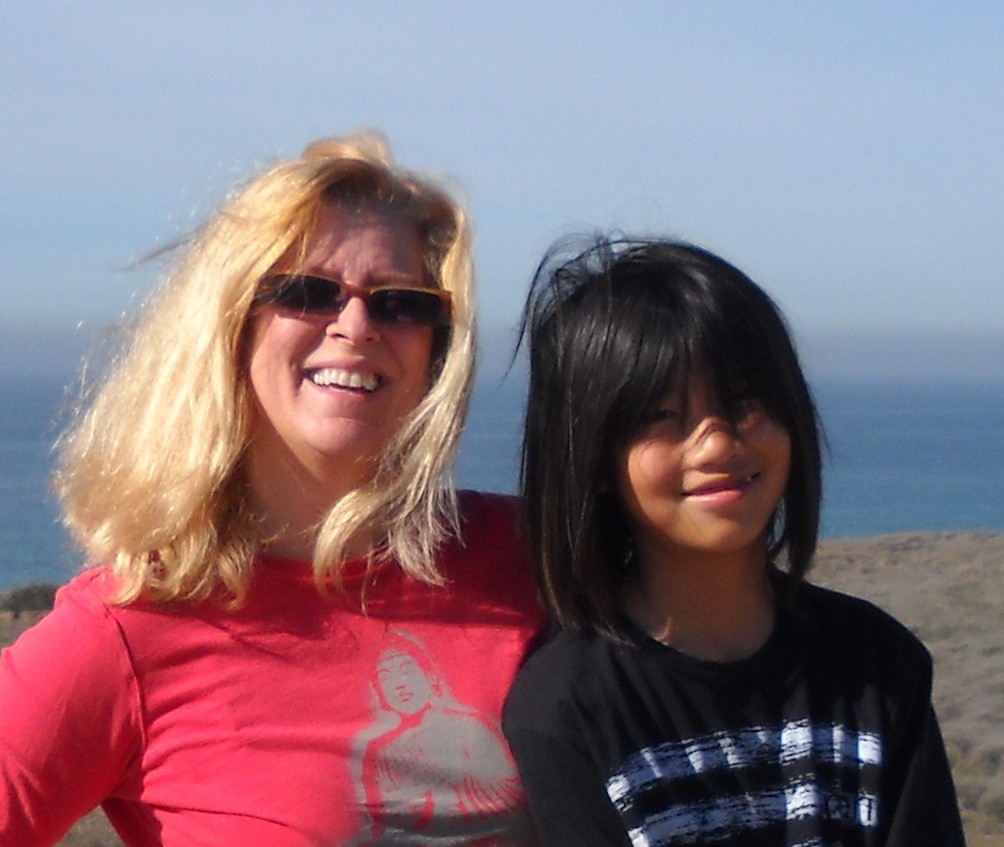 In 1999, Suzanne Eisenberg, an unmarried schoolteacher living in Studio City, California, made the long trek to Guangzhou, China, to adopt a baby girl. One day later, on Mother’s Day, she was handed a bundle of cuteness and named her Zoe. In the blink of an eye it’s now 17 years later, and she and her daughter are filling out college applications, readying for the next phase of this Solo Mom’s adoption journey.

Q: What made you decide to adopt as a single woman?

A: At first I thought about Russia because that’s where my family is from, my heritage, but adopting girls was difficult at the time, and there were health issues—plus it would take too long. I did online research on Chinese adoption. I’m a teacher, and my principal referred me to his brother-in-law who had done it. He told me about all it entails. I thought, What the hell? I’m going to go for it.

Q: Is Chinese adoption a tremendous amount of work?

A: It is. But for me, this was my pregnancy, so I liked each step: the interviews; the social workers; the meetings at the adoption agency, Vista Del Mar. Instead of going to an obstetrician, I was going to the federal building to get fingerprinted.

Q: How long did the entire process take?

A: I was lucky. I jammed through my paperwork in three months. It was my hobby. It was everything. I was determined. Once your paperwork is done, it’s a waiting game. Some people wait years. I was fortunate that I only had to wait eight months. My entire process took 11 months—even though it felt like three years.

Q: How does one prepare for the trip and the experience?

A: I asked for an infant, but I had no final say. You don’t choose—they choose. The adoption agency calls when they have your baby. They organize everything—the flights, the hotel. . . .

When I got the call, everything happened so fast. You have two weeks to pack. They tell you what to bring. You have to guess the size of the baby clothes based on the baby’s age that they are guessing. I didn’t have a clue. I found a pediatrician who gave me liquid antibiotics in case I needed them—which I did.

I put in a leave of absence for work. I was freaking out! I had my best friend, Debra, come with me. She already had two kids. I couldn’t have done it without her.

We got on the plane and flew 14 hours into Guangzhou. We could tell there were other moms on the flight. It was very exciting. It was surreal.

A: The organization had people meet us at the airport, and they said, “Welcome to China, and Happy Mother’s Day. Oh, and by the way, the United States just bombed the Chinese Embassy in Belgrade. But don’t worry, we’ll protect you.” There were already thousands protesting on the streets, and we had to go to the embassy, which was surrounded by guards.

When you arrive, they divide you up into groups that go to different areas. There were seven moms in my group, and we went to South China. Everyone was on pins and needles. The next morning, they brought the babies from the orphanage to the hotel. And in the lobby, they present you with your baby. The nannies come out carrying one baby at a time—like a ceremony. They call you up. You can’t see the baby because she’s bundled up. She’s like a present. It was so moving. It’s indescribable. All of a sudden you are holding your kid! And, of course, you cry. Everyone is happy. It’s a joyous occasion.

We took her up to the room and just stared at her. We changed her, and I bathed her and kept saying, “Now what, now what?” I stared at her; she stared at me; we stared at each other. It was a stare fest.

The whole thing was a two-week process. When we flew home, there were several other moms and babies on the flight, so in business class, there was a lot of crying going on.

Q: When did it sink in that you were a Solo Mom?

A: When we arrived home, a bunch of my friends were waiting with welcome signs and whatnot. But when everyone left, that’s when I thought, This is it. This is what I’ve been dreaming about all these years. I watched her sleeping. I still look at her sleeping now—then she’ll say, “Mom, you’re creepy.”

Q: What resources did you have when you brought her home?

A: I don’t have family here, but I had my friends. There is an organization called Children of China. It’s a support group that meets every month. They welcome you. I went to them before adopting and after the adoption. You can ask questions and pick their brains. And when you come back with your baby, there are new parents, and they pick your brain.

Q: Did adopting a child from another culture present any problems?

A: People can say stupid things. They would look at her, and look at me, and look at her. . . . One man asked me, “Does she speak English yet?” She’s eight months. She doesn’t even talk yet! “Does she like Chinese food?” I said, “Of course she does, she’s Jewish!” There are a lot of ignorant people out there. One of the things that really bugs me is when people say, “Oh, you saved her life.” That’s when I say, “No, she saved mine.”

Q: Do you try to keep her culture alive?

A: I wanted to, and I thought I should. We went every year to the Chinese parade, to the dinners; we did the Chinese celebrations; she took Mandarin lessons. . . . She needs to know where she’s from. She still has her Chinese name—it’s her middle name. But then we also celebrate Hanukkah, and we celebrate Thanksgiving and her “gotcha day.” She identifies as being Chinese, but she also identifies as being Jewish and American. As she grew older, things fell away. Every kid is different. For Zoe, it’s not important. She’s a regular teenage kid. They all make their choices about what’s important and what they want, but I gave her the foundation.

Q: Did you feel a shift in your community when you became a Solo Mom?

A: Absolutely. I lost a friend who didn’t think it was OK to be a single mom, but I made new friends from the Chinese adoption community.

And you find other Solo Moms. You find them; they find you.

Q: How did this entire experience affect your love life?

A: What love life?! I dated before I did this. But once I had her, I could give a shit about dating. All I wanted was to be with her. She was the most important person in my life—plus dating was too much work. The last thing I wanted after a day of being a single mom was to go in the bedroom and do more work! Now she’s telling me to date. When your kid is telling you to do it, then, yeah, maybe you should think about it.

Q: What advice do you have for other women considering adoption?

A: Go for it. It’s the best thing you could ever do.

Q: What are you the most proud of as a Solo Mom?

That I had the strength to do it. It was hard. But being a Solo Mom is not as hard as people think it is. Then again, I have nothing to compare it to. To me, it’s a journey. Yes, you have tough times. It’s hard to ask for help, but you have to ask for help.

A: When Zoe was little, I would dress her in her clothes the night before.

And when I’d take a shower, I’d put her in her little bouncy seat in front of the TV and say, “Here, stay with your father for a bit. I gotta go take a shower.”

If you’re considering adopting a child from China, here are some useful resources:

If you have questions for Solo Moms who’ve adopted, turn to our Sister Chat section—a confidential community that provides answers based on experience.