My One and Only One-Night Stand 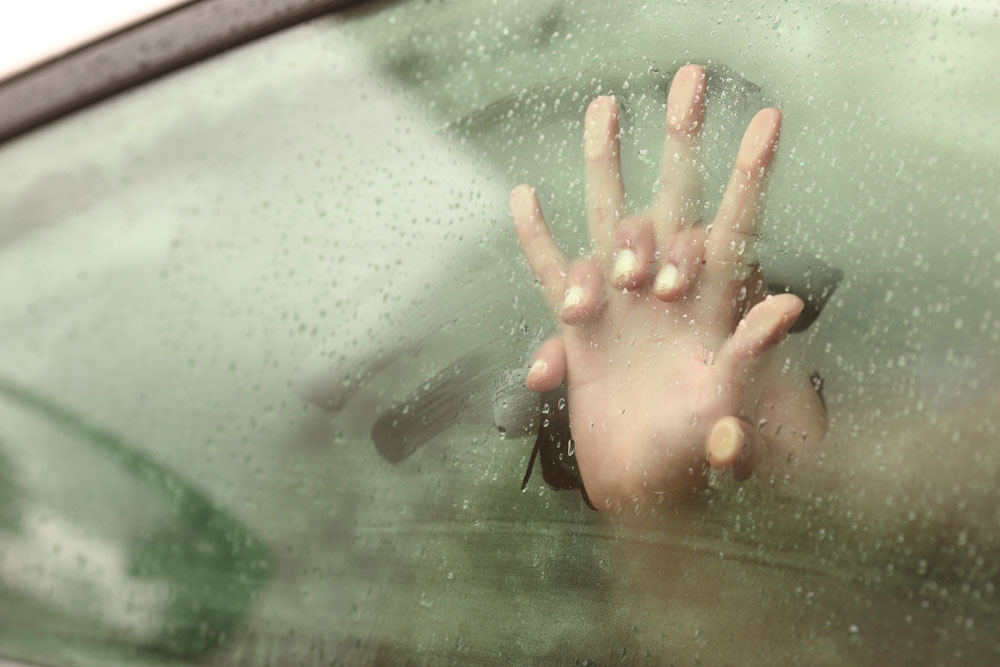 It all began online, of course. Because as a single mom, hanging out at bars, art openings, meetups, or any mix-and-mingles that bring the sexes together aren’t generally an option. So this dude was a gift from Match.com.

He had solid profile pics: a handsome head shot with four-day stubble and glasses (sexy-intelligent, right?); a picture at a Dodgers game with his son (good father, right?); and a photo of him working at the computer (employed, right?).

His blurb was solid as well: divorced, professional writer, professor, and a son away at college.

We were made for each other. Right?

PING! We matched, and so began the usual exchange:

Him: “How’s Match treating you so far?”

And on it went, his witty banter was better than most. After all, he was a writer—right?

I ignored the red flags almost immediately. My life had veered wildly into a treacherous Tinder tornado, ergo my newfound low self-esteem was picking up steam. This meant any man with any form of maladjusted, loser-like qualities would win my affections with little to no effort.

He lived in a bungalow behind his ex-wife’s house—as in, he didn’t have a place to live.

His son was “away at college”—as in, he probably didn’t have a son.

He wasn’t actually a “professor”—as in, he was a substitute teacher.

But he was a “writer”—as in, he really wanted to be a writer.

In fact, he’d self-published a book about a horse. (He gave me a gift certificate for a free copy!) But he was frustrated his book had yet to be discovered by the public.

He was quite interested in the fact that I was a working screenwriter. And Hemingway offered to let me turn his horse book into a film. How sweet is that? I was the luckiest girl alive. I couldn’t wait to introduce him to my agent!

So when he asked me out, I responded with an enthusiastic “Yes!”

He lived very far away, in a town I’d never heard of. He suggested we meet halfway. After all, he was superbusy being unemployed. He gave me directions to a restaurant I would later learn was five minutes from his house. I hired a babysitter and set out on my 10-day journey to the “hip little place” he frequented, to meet an unemployed writer who had a phantom son and lived in his ex-wife’s pool house.

After about seven hours of driving, I found the “hip restaurant.” It was a dark, chainlike pizza joint—so dark that one could only hear the group outing from Leisure World enjoying their four-dollar all-you-can-eat pasta special.

There he was: leaning on the bar, nursing a martini, eyeing me in his best Cary Grant. He sported a black long-sleeved, pill-plagued shirt, black pants, and a black blazer. His three-day stubble had grown into a full, skanky-ass beard. I wondered what bacteria loomed inside the dark, pube-like kink. His glasses were not so hip in person, and he looked oddly despairing—like a moth caught on a car windshield begging you to not turn on your wipers, for the love of God!

My red flags burst into red-hot flames, and I didn’t have a fire extinguisher. I was a Match.com bull’s-eye, and Shakespeare had his sights on me.

There we were, F. Scott and Zelda . . . Zelda with a bloody arrow plunged smack in the middle of her forehead.

He knew the bartender. Perhaps this was what made Pizza Hut “hip.” He ordered me a martini and offered half of his shrimp appetizer. I needed food, but he was full—having eaten without me. So I ordered three more martinis. I’d driven 300 miles to get there and would pay a sitter $300—I wanted some return on my investment.

He was proficient at talking about himself: regaling me with anecdotes of his many lovers, his prowess in bed, and the greatness of his cock. His sermon shifted to stories of his brilliant writing, his unappreciated talent, and how we should collaborate. He ordered another free bread basket to sop up the remaining sauce from the miniscule bowl of shrimp. Crumbs occasionally shot from his mouth like miniature gluten missiles. One or two landed on me, and I vomited in my mouth a little.

But after martini number three, he started to look less gross. I was still smarting over my previous dude whom I’d dated for two months before discovering he was homeless and still pining for the handsome Scotsman who’d abandoned me for the World Cup, a bar stool, and a bottomless pint of beer.

Leisure World had progressed to chocolate puddings as Tolstoy detailed every cranny and crevice of his life. My mind wandered: That woman’s wig is wonky. Did I give Lucky his deworming tablet? Damn, I wish I knew more about soccer. When I tuned back in, Raymond Chandler was midstory about his last girlfriend—a successful model but, alas, “bipolar.”

Note: Bipolar disorder is a mental condition characterized by periods of elevated moods and depression. Oddly, it is also a condition suffered by 100% of ex-wives and girlfriends of dating men—and according to these men, the reason for the breakup.

Now that Mark Twain had broken Gisele’s heart, she was obsessed with him as he was the “best sex she’d ever had.” Nevertheless, I shouldn’t feel nervous or insecure about having sex with him. He could help me. He could “teach me things.” Oh, and by the way, “We should write together!”

I ordered a glass of gasoline with a side of matches. Instead, they brought me martini number four. Magically, he was becoming more interesting and better looking. I thought, Maybe he’s not a loser. Maybe I should work with him. He did give me a free copy of his book, and it had a horse on the cover. I like horses.

It was getting late. I had a looming drive and a sitter fee probably pushing $10,000. The bill arrived. After a long, uncomfortable silence, he paid it. There were bread crumbs stuck in his beard.

So when he walked me to my car—I fucked him in the back seat.

I was blotto. It was over in one minute. It was the worst lay I’d ever experienced. Am I being punked? Where’s Allen Funt? Where’s Ashton Kutcher? I’d made a horrible mistake. I thought about my kids asleep in their beds . . . and felt terribly sad.

I watched Steinbeck pull up his pants—puffed with confidence he’d won me over with his sexual mastery, our future laid out before us: We’d make love and write. We were Anaïs Nin and Henry Miller. We’d win the Pulitzer, the Oscar, and free tickets to Disneyland.

He pulled on his shirt and bread crumbs fell out. I noticed his hairless white ankles, black socks, and a big butter stain on his pants. I vomited in my mouth a tiny bit more.

He was in love.

He wandered into the night—probably looking for a bus. I took a nap in my car and then drove home. I wrote a mortgage check to the sitter, put on my flannels, and crawled into bed with my dog, a pint of Häagen-Dazs, and a boatload of shame . . . I was a single mom, and I’d had a one-night stand with a total stranger in the back seat of my Acura.

I deleted his number and his profile, and tried to delete the entire experience from my brain.

That’s when the fun started.

The steady stream of texts began the next morning: “When can I see you again?” “We have such chemistry.” “Did you have a chance to check out my book?”

I didn’t respond. That’s when the voice mails started: “Heya!” “Howyadoin’?” “Thinkin’ ’boutcha.” “When can I see you again?” “Wonderin’ if you had a chance to read my book.”

On and on it went.

After 24 hours of nonstop nonsense, and a growing sense of dread, I attempted diplomacy via text: “It was nice meeting you. But I’ve realized I’m not ready to date. Good luck to you.”

No luck for me. He picked up steam. Somewhere along the way he’d gotten ahold of my e-mail. Long, flowing, mellifluous letters poured in.

I tried being firm: “Please stop writing, texting, and calling me.”

After several more months, when obsessing didn’t work, he went for his best move, his pièce de résistance, his secret weapon for winning chicks: He sent me an e-mail asking if I had genital warts because apparently he did. (Feel free to insert appropriate Looney Tunes sound effect.) The e-mail concluded with, “Happy 10-month anniversary of our magical date. Hope to have more!”

My text, “I DO NOT HAVE GENITAL WARTS. LEAVE ME ALONE!”

In a meticulously written follow-up e-mail (after a meticulously rehearsed, unanswered voice mail), he explained that both he and his ex, Heidi Klum, had genital warts. He and Heidi had reconnected just once since our magical date. But since Heidi would never sleep with another man, and being I was the only woman he’d been with aside from Heidi—the only possible explanation was that I had passed the bumpy itchies to him, then he to her. But, hey, if I had genital warts, it was “totally cool.” Did I want to get together? And did I happen to read his book?

“DUDE. CINDY CRAWFORD GAVE YOU AN STD. DO NOT CONTACT ME AGAIN. Or my boyfriend, Vin Diesel, will get all up in your ass.” (If you are going to lie, lie big.)

And I must admit, it left a tiny void in my life.

Months later, out of nowhere, I received this text: “Happy two-year anniversary of our date. We should get together. Did you ever get a chance to check out my book?”

I did not respond, but I realized his was the longest relationship I’d had since my divorce. In fact, Genital Warts was the only man I knew who didn’t have commitment issues. It’s been three years, and the notes are still coming—and I’ll be damned if his aren’t the only notes I can count on.

He even remembered my birthday!

I’m a single mom. I had a one-night stand. It was stupid. I got lucky. I’ll never do it again.

And, no, I never got around to reading his book.