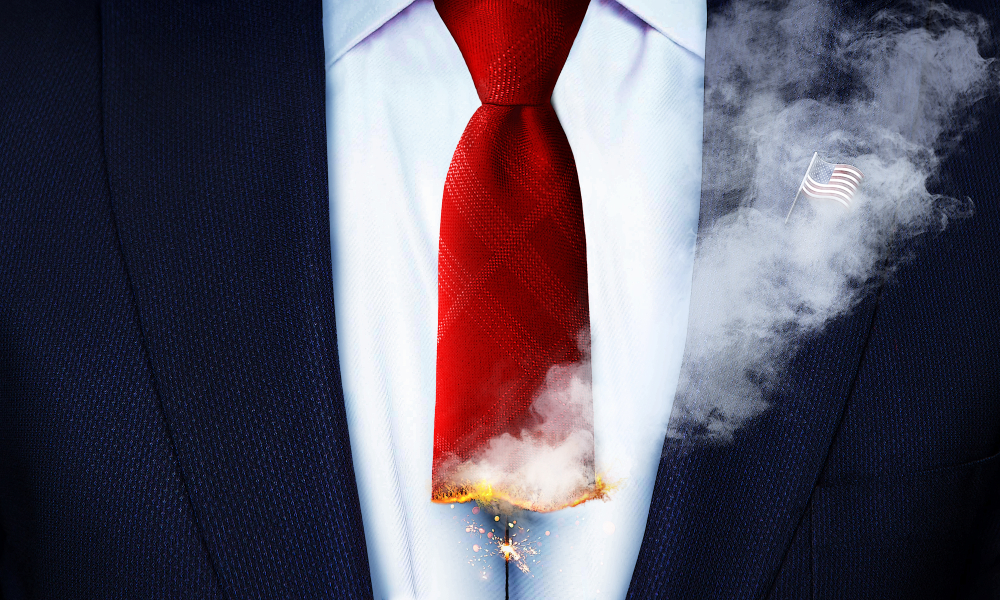 
When I was a kid, my neighbor had this wind-up toy, a Godzilla-like creature that spit sparks as it hobbled forward on its plastic rectangle feet. I liked the toy, but it made me nervous. You see, I grew up in California, where something as simple as a lawnmower blade striking a rock could spark a wildfire of epic proportions.

By the time I was 10 years old, I could sniff the air and tell you if the smoke was woodfire from a chimney, steak on a barbecue, or a dreaded grass fire.

Fast-forward 30-some years, now I’m a mom of two kids who have a genetic condition that predisposes them to lung problems. Smoke is bad for everyone but worse for them. The superhuman sense of smell that women develop when pregnant? I never lost mine. I’ve been known to smell smoke from fires hundreds of miles off, before news of them has hit the airwaves.

But not the Camp Fire, currently burning in Butte County, California. I saw it before I smelled it, off in the distance, as I carpooled home from a funeral with a couple friends.

At first, we hoped what we were seeing was a marine layer of fog rolling back toward San Francisco Bay. When traffic slowed to a crawl on Highway 13 in Oakland and a blaring fire truck wove between the cars to pass us, we realized a fire had started on the shoulder of the highway and was quickly creeping up a steep hill, toward a eucalyptus grove. As we rolled by, we saw dozens of firefighters climbing alongside the flames, circling them, digging trenches to stop the spread. My friends and I breathed a sigh of relief—it was both small and nearly contained.

Once we passed the fire, however, we realized something much bigger was happening. “Crap,” I said, pointing to the haze on the horizon, “that doesn’t look good.”

Paradise, California, is 165 miles from my home. By the time I pulled in my driveway, I could taste the smoke in the air.

Here’s the thing—I’m an empathic person by nature. Empaths, feelers—we’re like the air filters of humanity. If there’s pain floating around, it’s going to pass through us. The good news: this means we’re more likely to notice when people are in need, more likely to feel compelled to lend a helping hand. The bad news: if we’re not careful, that collective pain can clog us up, and we stop functioning optimally.

Honestly, I don’t think I’ve been functioning optimally since your presidency began.

Hours before I learned about the Camp Fire on November 8, this empath’s filter was already hard at work. That morning, California woke to the news of another mass shooting, this one in Thousand Oaks. Twelve people dead. The 307th mass shooting this year. Still no movement on gun control and none in sight under your watch.

Then I headed to a funeral for my friend’s father. He was 96 years old. Services were held at a temple where he once had served as president. I sat directly behind his wife of 72 years. Dementia has erased her short-term memory, so my friend had to break the news to her mother, over and over, that her husband had died.

The rabbi explained the Jewish tradition of tearing clothing in mourning. It symbolizes not only what has been ripped away but what has ripped open, releasing the beloved’s soul. The family tore pieces of black fabric they had clipped to their lapels. That sound, the tearing—pain and blessing—it’s still ringing in my ears.

Sitting in the temple, I thought of those souls ripped from bodies at the Tree of Life synagogue in Pittsburgh just a week earlier, 11 people murdered by a man firing an assault weapon while shouting anti-Semitic slurs. That massacre just as easily could have happened in the middle of this beloved man’s funeral, in San Leandro, California. Or in a movie theater. Or a classroom. Or a bar. Or a church. Or a grocery store. Or anywhere the angry sparks you have stirred with your racist hate-mongering finally combust.

I did the only thing I know to do when the pain of the world chokes the air—I rested my hands, palms down, on my thighs, to connect with what is. I took slow, deep breaths, inhaling the grief and helplessness and fear, then exhaling peace. If nothing else, this practice cleans the filter, restores my functioning, and readies me to continue serving as I can.

I have practiced this daily for decades, sometimes hourly since your presidency began.

The most vulnerable people in this country are more so with you at the helm.

Let me give you some numbers: So far, the Camp Fire has burned 150,000 acres, killed 77 people, and destroyed 11,713 residences, not to mention hundreds of commercial buildings. At the moment, 993 people are listed as missing. I say “so far” and “at the moment” because the numbers of dead, missing, and displaced people, and lost homes and businesses rise every day.

But as the people of Paradise rushed to escape flames that were consuming 80 acres a minute, and as our treasured first responders rushed toward those same flames to rescue people who couldn’t get out on their own, you tweeted:

“There is no reason for these massive, deadly and costly forest fires in California except that forest management is so poor. Billions of dollars are given each year, with so many lives lost, all because of gross mismanagement of the forests. Remedy now, or no more Fed payments!”

Right now, 5,332 fire personnel continue putting their lives on the line to “remedy” the fire that’s still burning, 11 days later. While people who have lost everything huddle on shelter cots, on floors, on church pews, in cars, and in tents; while volunteers step up to help; and while people search for or mourn their lost loved ones, you threaten to take away funding.

You’re like the abusive parent who responds to a bleeding child by yelling, “What the hell did you do?! How many times have I told you monkey bars are dangerous?! What did you expect would happen?! Now you’re getting blood on the floor!”

Then came your tips for forest management:

Then you compared California’s forests, which have a 200-day dry season, to those of snowy, humid Finland, and said if we’d just rake our forests like Finland, we’d be OK:

“You look at other countries where they do it differently and it’s a whole different story. I was with the president of Finland and he said we have, uh, much different – we’re a forest nation. He called it a forest nation, and they spend a lot of time raking and cleaning and doing things and they don’t have any problem.”

Finnish Twitter responded with photos of people vacuuming their forest floors, scraping tree bark with rakes, and the hashtag #rakeamericagreatagain.

Along with meditation practice, dark humor is a go-to survival tactic for me, but you know what? Your idiocy ceased to be funny a long time ago. I can’t laugh anymore.

My neighbors to the north are dead, missing, unhoused, sick, hurt, scared, grieving, and fighting this fire with all they’ve got. Thousands of us are mobilizing in big and small ways to get those affected everything they need, from housing to food to N95 respirators to tampons.

When you announced your plans to visit the fire-ravaged sites in California, I thought, Please, no. Just leave us alone.

You shuffled through the fire zone like a Trump-sized version of that Godzilla wind-up toy, painful blunders sparking out of your mouth.

In lieu of the reassurance people seek from leaders at times like these, surrounded by the charred-out remains of homes, you babbled:

“We do have to do management, maintenance and uh we’ll be working also with environmental groups. They’ve really uh – I think everybody’s seen the light. And uh I don’t think we’ll have this again to this extent. We’re going to have to work quickly. But a lot of people are uh very much uh – there’s been a lot of study going on over the last little while and I will, I will say I think you’re gonna have – hopefully this is going to be the last of these because this was a really, really bad one.”

While some residents of Paradise had hoped you would express more empathy once you had witnessed the wreckage for yourself, instead you forgot the name of their town. Commenting on the fires, you said, “I mean as big as they look on the tube, you don’t see what’s going on until you come here, and what we saw at Pleasure—what a name—right now. . . . ”

The people standing beside you said, “Paradise.”

You seemed to notice they had spoken. You paused, looked askance, but then you doubled down, emphasizing, “But what we just saw—we just left Pleasure. . . . ”

“Or Paradise . . . ,” you said, as if you considered that name a viable option, too, then you continued, “and what we just saw at Paradise is just, you know, it’s just not acceptable.”

In the San Francisco Bay Area, it’s impossible to ignore what’s happening in Butte County. For 11 days we have remained indoors as much as possible. Even short excursions—walking from the house to the car, from the car to the grocery store—require a particulate respirator. Schools have closed down. Fine white ash blows through our yards. For the past many days our air quality has rated—no exaggeration, verifiable fact—the worst in the world.

Whether you’re an empath or not, when you live within 200 miles of a fire zone, you’re pulling other people’s tragedy into your lungs, absorbing the particles of their loss.

Some people are more aware of this than others.

You, Mr. President, despite your site visit, appear to have no awareness at all.

According to Bloomberg News reporter Jennifer Jacobs, you turned your commentary about the dangers of the Camp Fire into a joke:

Wildfire can go “a football field a second. So if you’re sitting in your home and you hear, well, it’s fairly close by, maybe I’ll watch the end of this program. ... The end of CNN.”

(Grinned at TV pooler, from CNN.)

The looks on the faces of Governor-Elect Gavin Newsom and outgoing governor Jerry Brown say it all: Your reality-show segment is wasting our time. Let us get back to our real work, helping Californians in need.

As for the people who were hoping for your empathy? Kirk Ellsworth speaks for them: “What he said was ridiculous. It hurts my heart.” A father whose adult children had lost their homes, he told the Guardian, “I voted for him – and now? He can kiss my red ass.”

With a heavy heart,

Is there someone who deserves a time-out or whom we should show our respect to? Let us know at contact.us@esme.com.

We don’t always get second chances at life, especially when the stakes a...