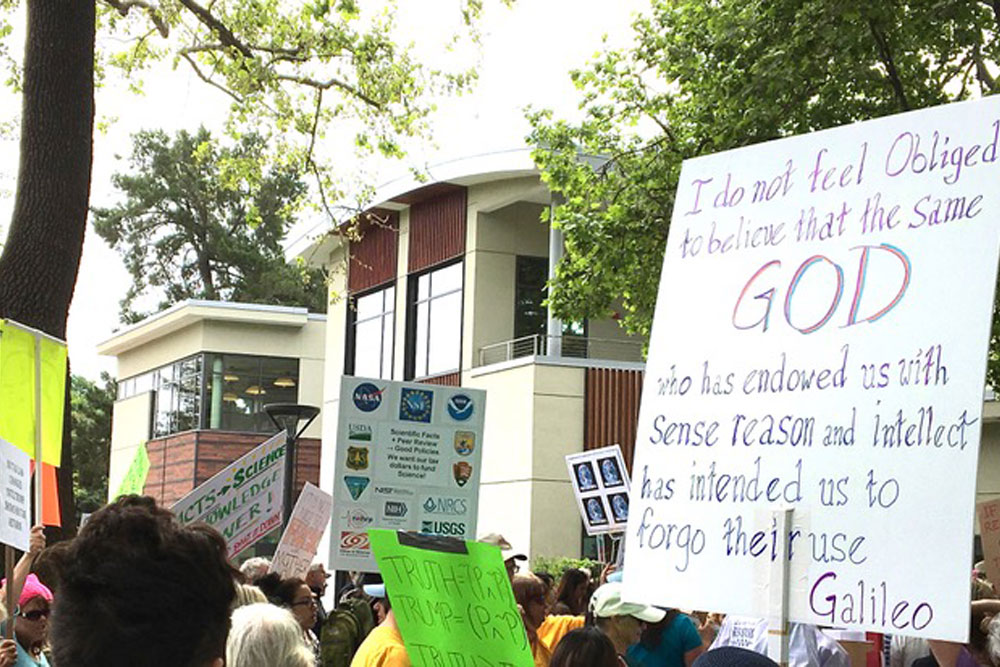 For your executive order promoting free speech and religious liberty

Well, apparently the religious right will get in bed with anyone these days, Donny. Lucky you. I mean, years ago a man would have to repent—as in actually, humbly confess his sins and say he’d been changed by his love of the Lord—in order to hook up with right-wing “Christian” politicians. But you, Donny? You can say stuff such as, “You know I’m automatically attracted to beautiful women—I just start kissing them. It’s like a magnet. Just kiss. I don’t even wait. And when you’re a star, they let you do it, you can do anything. Grab them by the p***y, you can do anything,” and you still get social conservatives lined up for a chance toe-tap with you in the bathroom stall of your choice.

They’re expecting a lot from you, Donny, these so-called “Christian” operatives whose behaviors, rhetoric, and lived values are atrocious enough to call actual Christ back down to Earth, just to smack them upside their heads and shout, “Did you understand nothing I said?”

Social conservatives are demanding that you revoke Obama-era protections and open up legal loopholes so they can refuse services, health care, housing, employment, and equal rights to LGBTQ people, Solo Moms, and anyone else living a life they deem “unchristian.”

Donny, if you bow to their wishes, you’ll be destabilizing the lives of countless LGBTQ people and Solo Moms. But you don’t care about that, do you? No, you care about one thing: reelection. Well, reelection and television ratings. And popular-vote counts. And Inauguration Day crowd-size estimates.

And that makes you dangerous to LGBTQ people and Solo Moms, who have suffered at the hands of conservative politicians for decades.

You know these leaders of the religious right are a lot like you, Donny: if you don’t put out, they’re not going to invite you back for a second term. That’s why you signed an executive order “promoting free speech and religious liberty.” Not because you care about “religion” or “liberty,” but because you care about appeasing the religious right, so you can obsess over the number of people who attend your second inauguration.

But you blew it, Donny. In the run up to this executive order, your “Christian” operatives anticipated you would give them a “license to discriminate,” something along the lines of the “Religious Freedom Restoration Act” (RFRA) Vice President Mike Pence signed into law in Indiana when he was the governor of that state. Those “Christians” wanted an executive order that would allow them to claim “religious liberty” as a legal excuse to discriminate against LGBTQ people, Solo Moms, and others. But all you gave them was the executive-order equivalent of a peck on the cheek after they shelled out cash for a really expensive meal and front-row seats at the opera.

Donny, we know what your executive order didn’t do: it did not allow for broad-reaching discrimination against LGBTQ people, as social conservatives hoped it would.

But what did it do?

Your executive order loosened the tie of the Johnson Amendment, a law that “prohibits tax-exempt charitable organizations such as churches from participating directly or indirectly in any political campaign to support or oppose a candidate.” Effectively, you discouraged the Internal Revenue Service from aggressively enforcing this law. Could your executive order unleash a windfall of money into the coffers of the religious right? Possibly. Does it satisfy your “Christian” operatives? Nope. Not at all.

Your executive order also unbuttoned the collar of an Obama-era requirement that health-insurance companies cover contraception. Your order allows organizations with faith-based objections to refuse this coverage to their employees. Allowing broad-reaching exceptions to faith-based organizations or “people of faith” could ultimately affect, say, a lesbian’s or a Solo Mom’s ability to adopt a child from a faith-based agency or a transgender person’s access to necessary health services or a lesbian’s or a Solo Mom’s access to housing. But, Donny, it appears you have stopped short of all that. So far. When it comes to faith-based exceptions, according to the Hill, your executive order simply restates a request the United States Supreme Court issued more than a year ago.

Donny, when you signed your executive order, three things happened: some LGBTQ people and Solo Moms breathed a (temporary) sigh of relief, some religious right leaders got pissed, and both sides suspected your daughter Ivanka was responsible for declawing the original, more threatening draft of the executive order that was leaked last February.

To social conservatives, your executive order is little more than a smoke screen. And remember, they are the kings of smoke screens. How else could they have convinced the “Christian” electorate to vote for a man who answered the question, “What’s the favorite thing you have in common with your daughter?” with “Well, I was going to say sex, but . . . ”

But they aren’t the only people who see through your smoke screen, Donny. As Michelangelo Signorile, editor-at large for the Huffington Post’s Queer Voices, points out, you have a seasoned strategist whispering in your ear, notoriously anti-LGBTQ right-winger Pence.

Like you, Pence knows the religious right won’t stick around unless you appease them by taking a serious hit at LGBTQ rights. But Pence also knows firsthand the national backlash you’ll incur if you move too quickly. His home state of Indiana is still reeling from the aftereffects of his RFRA.

So while your “Christians” are busy vilifying your “liberal” daughter for revising your original executive order, Pence is setting up his snipers, with LGBTQ rights—and the rights of anyone deemed “unchristian,” including Solo Moms—in their sights.

And what are you doing, Donny? Anything you can to stay in power.

Meanwhile, we defenders of life, liberty, and the pursuit of happiness for all Americans? We see you behind that smoke screen, Donny. We’re millions strong, we’re rising up, and until we vote you out of office, we will resist your every move.