A Nursing Baby Is Not a Threat to National Security 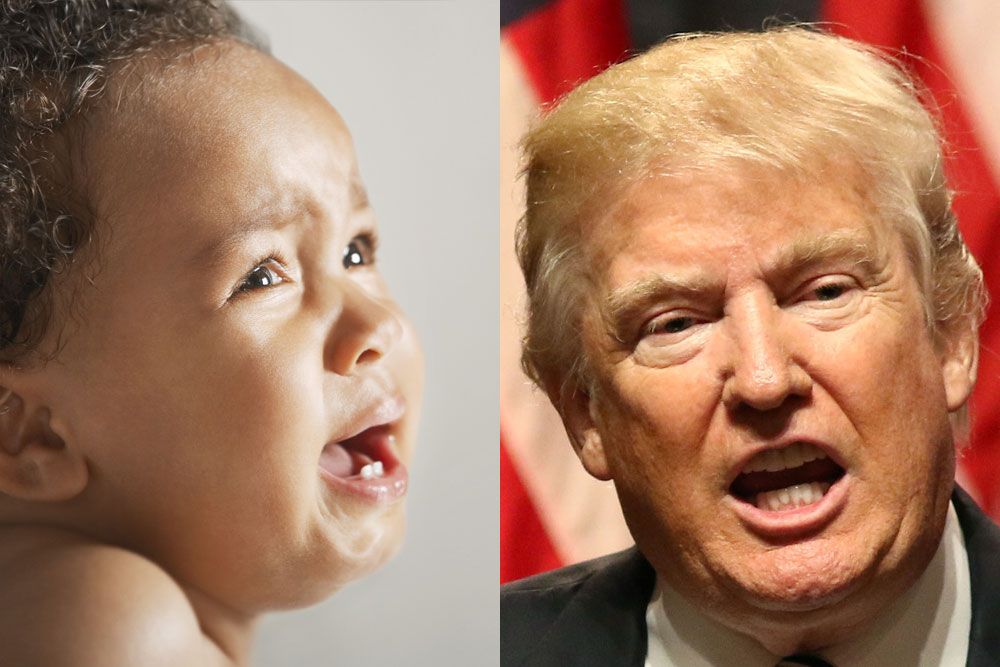 Of all the heartbreaking and infuriating stories to emerge over the weekend from the pandemonium that ensued following Donald Trump’s unlawful immigration ban on residents from seven countries, there are two that are beyond outrageous. These incidents call into question not only Trump’s understanding of what constitutes a valid threat to our security but also whether the officials enforcing the order at our nation’s airports are actual human beings or Trumped-up cyborgs.

In the first incident, a five-year-old boy, who is a U.S. citizen, was handcuffed for more than four hours at Dulles International Airport because he was deemed a security risk. Let that sink in. Think of your own children at the age of five. Think of the time you took your eyes off of your child for one moment in a store and then panicked when realizing your child had walked away. Now think of that boy’s mother, an Iranian, who was waiting for her son to arrive with another family on a flight from Iran, and the sheer terror she must have felt not knowing who was caring for her child or if he was being cared for—not for a moment, but for more than four hours.

When she was finally reunited with her son, she covered him with kisses and hugged him tight.

You can see in the video of the reunion above, her face is tense, fear mingles with relief, and there is a faint hint of a smile. Looking at the video, it will be clear to all mothers that she held in her emotions to protect her son, but there is a torrent of pain and fear behind her eyes. She carries him away and begins to sing “Happy Birthday,” while family members surround them with flowers and balloons.

Senator Chris Van Hollen of Maryland, where the family lives, called the episode “outrageous,” particularly in light of the fact that the mother gave airport officials advance notice of her son’s arrival. On Monday, Van Hollen tweeted, “This 5-yr-old U.S. citizen & Maryland resident is not a threat to our country. Donald Trump’s executive order is.”

The White House disagrees. In a press briefing on Monday, White House spokesperson and Trump’s chief falsifier, Sean Spicer, defended the detention, adding: “. . . to assume that just because of someone’s age or gender or whatever that they don’t pose a threat would be misguided and wrong.” It’s ironic that he used the words misguided and wrong, since they seem to be the mantra for the administration.

Not to be outdone, an official in Texas took the absurd notion that children pose a threat to a dystopian low and separated a mother from her 11-month-old nursing baby for hours at Dallas/Fort Worth Airport. The Sudanese-born mother, who is a legal permanent resident, was kept from her American-born baby, detained in another location, and denied access to her child. The child, an American citizen, was detained and denied her source of food by the United States government. Now let that sink in.

While multiple lawyers and the American Civil Liberties Union fought to reunite the pair, the mother sat helpless, no doubt feeling her milk come in and no doubt anguished knowing that her child needed comfort, needed to nurse, needed her mother, and not knowing who, if anyone, was holding her baby. Can you imagine a worse torture for a mother? I can’t.

One of the lawyers, Andrew Strong, posted increasingly anxious updates on his Facebook page. In one, he said that the person working the desk had covered her name badge and would not disclose the welfare of the child. HER name. A woman was complicit in this abomination. Who are these people? When they signed on to protect our borders, did they leave their humanity at home? Is there any world, any parallel universe where an 11-month-old baby could possibly pose a threat to anyone?

Yes, in Donald Trump’s Kafkaesque reality, everyone is a threat. He has repeatedly stated that the ban was instituted to make us safer, to protect us from the threat of terrorism; and he has vowed to defeat ISIS. Instead, he has given that terrorist group and many others ample fodder for recruitment. The narrative that the United States is the enemy who is out to oppress Muslims was greatly strengthened this past weekend.

Trump’s directive and the horrific way it was enforced all over the country plays right into that narrative, and you can be damned sure that the stories about the innocent five-year-old and nursing baby have already been included in new recruitment videos. And what of the two children detained? How much allegiance will they feel to their country as they mature and comprehend what was done to them?

It’s also ironic that Trump is so afraid of children because his understanding of the world is positively infantile.

If you agree with this time out, join our closed Facebook Group ESME Collective Action, where we advocate for tolerance and human rights.