A Solo Mom Prepares for Battle: The Parent-Teacher Conference 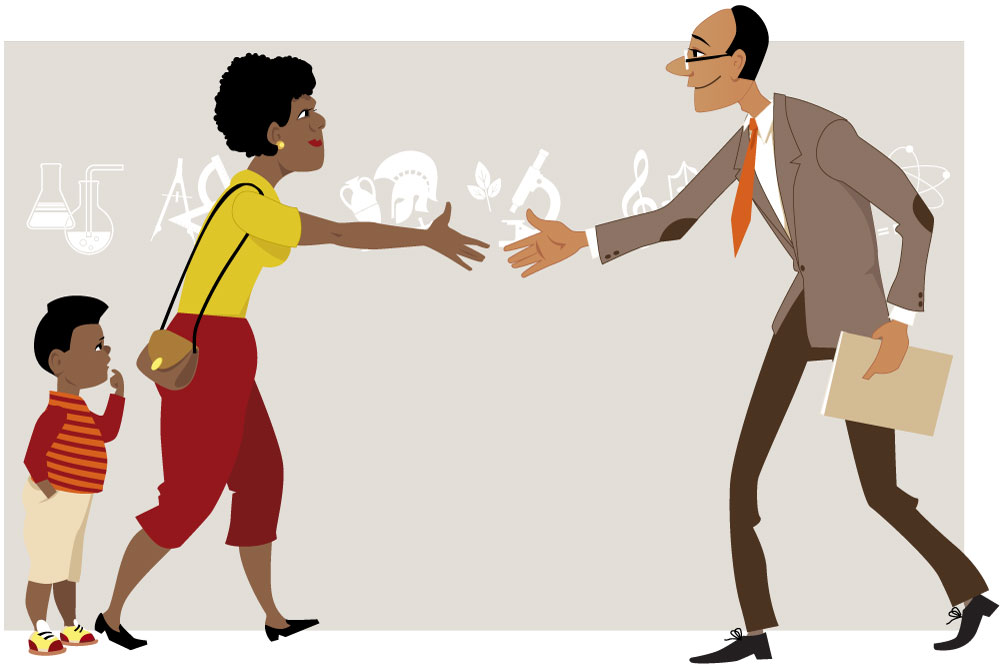 How a Solo Mom prepares for battle, also known as a parent-teacher conference

The parent-teacher conference: It can strike fear into a Solo Mom’s deepest fiber. You find yourself girding your loins for battle, polishing your armor so it shines, and emptying your Valkyrie tote bag of all those receipts for phoenix feather cleaning, battle-axe sharpening, and no-rust lances. You pretend to your offspring that you’re curious and excited to spend one-on-one time with Mr. or Miss/Mrs. Educational Delphic Oracle. But after a few years, your kid will know your game better than you do. “You don’t have to,” your child will say plaintively. Which, of course, will only make you throw a backpack of ammo over your shoulder. “Oh, really?” you will reply. “And why is that? Is there something I should know?”

Why, you may ask, does this intimate scholastic tȇte-a-tȇte strike fear in the heart of the typical solo mother? After all, hasn’t she already climbed some of the toughest peaks of late-night mystery illnesses? Struggled through the swamps of “breakfast might have to be last night’s pizza” despair? We’ve learned to not only anticipate but expect the worst-case scenario, which is part of the problem, of course.

Here are some tactics for crossing the battlefield relatively unscathed:

TMI: My older child never told anyone anything, least of all her teachers. Fiercely private, she pretended she lived on planet Nuclear Family. My conferences with her teachers were always about her schoolwork, her dimple, and her lack of punctuation. Meanwhile, my younger child liked to share. Everything. So when I arrived at her kindergarten parent teacher conference, the very sweet Mrs. T. knitted her eyebrows and said, with a tilt of her head: “Your daughter says her father is a drunk who lives in his car.” Stealthily, I pulled out my battle ax. I smiled politely and said, “Actually he totaled the car. So we don’t know where he’s living.” And then, because a Solo Mom is always prepared, I smiled and leaned forward, delivering the sucker punch: “The therapist says it’s better to be completely honest in front of the children, or they create even greater dramas.” Which was true. Needless to say, we didn’t really get into my kid’s letter skills at that meeting.

Be Prepared: I have a friend who once envisioned handing over a card to the teacher at her daughter’s conferences that read:

She imagines that then she and the teacher will be able to move on to other subjects, such as her daughter’s interest in amphibians.

Don a Dual Personality—Mom and Dad: The other tactic I have tried is to pretend to be both ideal parents. It’s a different kind of armor. I play the pushy mother, then I play the concerned but distant father, then I play the concerned and overinvolved mother, then I play the all-around sensible dad. I walk through these scenarios the night before, until I feel I have invoked the gods of cliché parenting and inculcated all these comfortable stereotypes into my skin and bones. I plot it down to bringing the teacher a home-baked brownie (from a mix—but baked in my own oven!) and a store bought latte. Inevitably, this nuclear family dual role-playing is as burdensome as chain mail.

Final Realization: At some point, sloshing around in that defensive suit of crossbow-toting armor, I suddenly realized…this is my child’s school. And my child’s life. Not mine. Maybe, if I weren’t quite so ready to portray the ideal family life, I would get to hear what the teacher thought about my child’s potential as an adult. Maybe, if I didn’t plan for a confrontation and instead went with the flow, I could learn something about this little person who every day walked out the door and into a world where what happened at home was just the beginning of the day.

That’s when a teacher looked at me and smiled. “Really?” she said. “You’re a solo parent? I never would have guessed.”