Through the Looking Glass and What I Found There 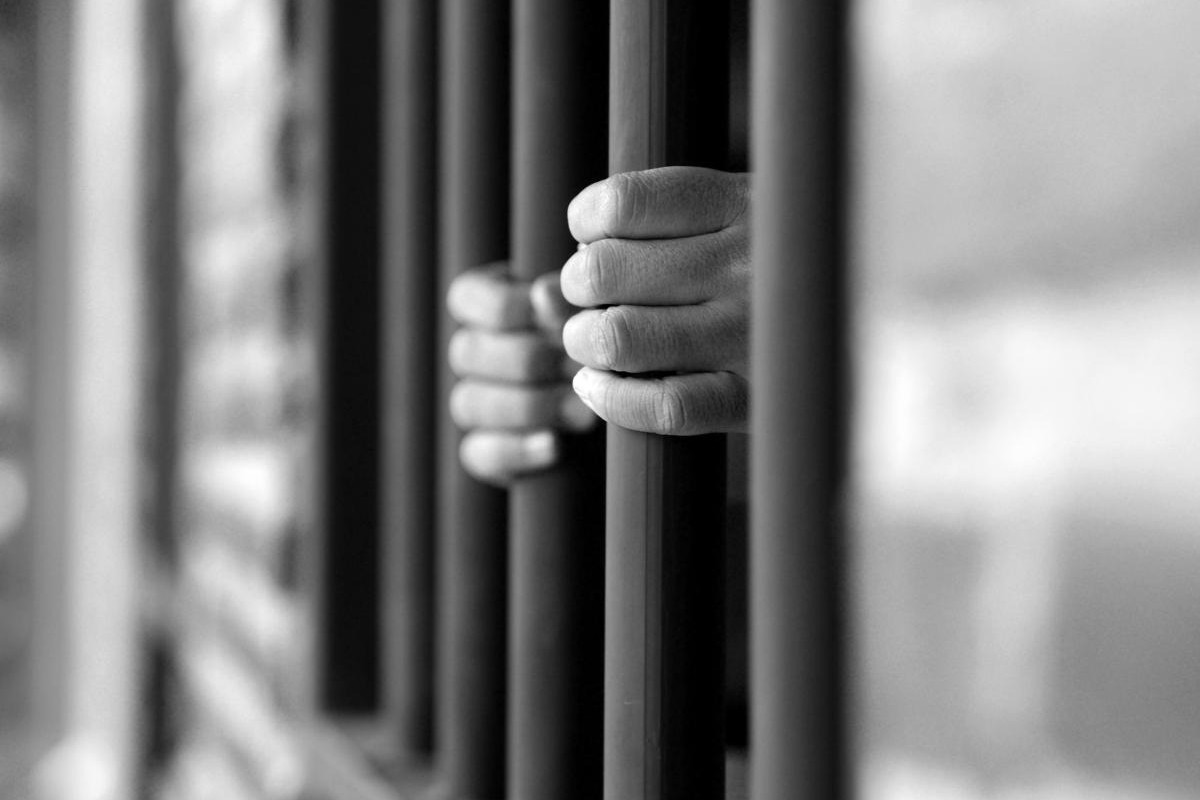 I tried not to work myself up about visiting my son, Daniel, in jail, on his 19th birthday, on Mother’s Day. But there you have it: some things can’t be ignored. I promised myself I wouldn’t turn the day into a maudlin B-movie scene replete with wistful stares and quivering lower lips. Good luck with that. A part of me wanted to kill him.


I anticipated a double-paned, more-likely-than-not bulletproof glass would separate me from my son. I imagined a window similar to the one I looked through after Daniel was born, his discharge from the hospital delayed because he came butt first into the world. The backwards entry bruised his entire bottom and sentenced him to days under a garish lavender light. From day one, I couldn’t protect him from the world. I failed motherhood early in the game and always fought to make up for it. Single parents do that.

I learned about Daniel’s incarceration from his girlfriend.

“I thought you needed to know.” With a perky yet street-savvy voice, she chatted like he was away at camp or in the hospital. She shared visiting hours, the dress code, and explained my name had to be on “the list.” She assured me it was. “If you’re late,” she warned, “the next visitation isn’t till next week ’cause I see him on Tuesday.” I nodded silent understanding to no one.

Of course I had to see Daniel—it was his birthday—however, I didn’t want to see him in a place that reminded me of savage moments from The Shawshank Redemption. And I didn’t want to face the reality of my son, the felon. Driving a stolen car and marijuana possession. I’d rather relive the last good time we enjoyed at a ZZ Top/Lynyrd Skynyrd concert where I ignored, and he deeply inhaled, the miasmic cloud of pot surrounding us.

Even victimless crimes change the life of the perpetrator and his family forever. This day Daniel’s crime didn’t matter. A son is a son. A mother is a mother. I had been warned about being a parent. “Your child is your child, no matter how old he is, no matter what he’s done.”

If I were an honest person, I would admit seeing him was selfish. It was Mother’s Day. I dreamed of perfection: perfect son, perfect parent, and perfect family holidays. Reality check: As a young adult, he handed me holiday cards fresh from a paper bag, unsigned, on his way to a 15-minute pit stop with me. At Christmas, if he had a girlfriend, he ate with her family, not ours. If you asked him, Daniel could neither tell you my birthday nor how old I was.

This Mother’s Day visit affirmed what I already knew: I would never have the child of my dreams. I wanted a child who succeeded. At what? I had no idea. I wanted a child who loved and respected me as much as I did my parents. I wanted a happy child, one who could break the restraints established by a controlling, overachieving mother and run through sprinklers with abandon. I had given him the chance one day at the football field. Sweat dripped down his face and plastered his curly hair to his head. His cheeks flushed with effort. “You wanna run through the sprinklers to cool off? Go ahead. We have time.” He shrugged and ambled off for the car. Just then I wanted to run through those sprinklers and show him how it was done. I didn’t. None of that mattered now.

Rummaging through my closet to find something to wear, I felt like I was going on a first date. Would I wear the right thing? Say the right words? Would I even recognize this person, so much a part of me, yet who defined the boundaries of our relationship with cycles of estrangement? He knew right from wrong. I made a point to return to the Tom Thumb when they undercharged me for groceries by $10. The same week, finding a $50 bill on the street while out jogging made the difference in our monthly budget. I didn’t drink and drive, didn’t call in sick when I was well. I confess I did pick him up early from school some Fridays to go to a movie. Did things like that lead to a life of crime?

I decided to wear the dress I wore for my second wedding—in retrospect, a bad decision. It was an off-the-rack Dress Barn thing, gauzy flowered print with sleeves the length mandated by the Collin County Corrections Department. I was old enough to have grandchildren, but some bureaucrat imagined my flabby arms might incite the inmates. Long after the visit, it dawned on me Daniel started to pull away the day I remarried, the day he realized he was no longer the center of my universe.

The first step in visitation required forfeiture of identification, just like being a prisoner. I handed the desk officer my driver’s license. He verified my name on “the list.” Next I stowed the rest of my life—wallet, car keys, and a writer’s notepad—in a sticky-to-touch nine-by-nine locker.

Exactly 23 minutes to visit. I waited and snatched glimpses of those around me, incredulous that so many ordinary people sat in the same sorrow as I. In the far corner of the waiting room I recognized a man with whom I worked. We nodded in acknowledgement but made no attempt to connect. I wondered if we would ever speak again at work. Visiting someone in jail is a most private public thing.

An invisible speaker blared the names of visitors. I became a 52-year-old Alice as in Through the Looking-Glass and What Alice Found There. A metal detector ushered me through the rabbit hole to my son. Our group dispersed and explored an M.C. Escher world filled with flights of stairs, hallways, and visitation pods. I lost my sense of which way was up in this modern-day wonderland. I recognized the physical surroundings but knew nothing about the emotions rushing through me with such force I staggered and leaned against the wall to steady myself.

One woman brought her young daughter, who skipped down the hall in flip-flops. I shuddered. I would never have brought my son to visit someone in jail. But he brought me. I pushed through a heavy metal door and went down two short flights of steps. Another door, this time double layered, forced me to wait until an alarm sounded. The clank and grind of lock release preceded the rumbling of the door on its track. It opened. I surveyed a semicircle of stools bolted to a metal floor, one per cubicle. I took the stool closest to the wall thinking it afforded some sort of privacy.

Smudged fingerprints smeared the stainless steel. On the glass divider, I could see the whorls of previous visitors who touched it. Should I smile? Impossible. What if I cried? It might suggest relief or forgiveness. Not a chance. I look so much like my mother. I knew my mouth would set in the teeth-grinding tension of disapproval when Daniel appeared. I hoped to maintain a modicum of dignity. I noticed the black phone mounted on the right side of the cubicle. The nurse in me thought about germs. The mother in me hoped for good sound quality. More waiting. I hadn’t seen my son in months. Anticipation unsettled me.

I saw their feet first. Two sets of legs didn’t belong to my boy. Nor did the next three. Finally Daniel appeared in the neon-orange jump suit. He joked with one of the guards. Always at ease, always working the crowd, he dared to smile on one of the worst days of my life. Following my initial wave of relief, the desire to slap him rooted itself in my gut and grew exponentially into virulent anger. I hated what he had done.

The feeling reminded me of the day I almost broke Daniel’s jaw. He screeched at me, “Why are you such a bitch?” after I had set some limits. My anger exploded, not because of the words but the vehemence with which they were spoken. I swung my arm in a wide arc, my hand balled and hard as iron. Daniel saw it coming and ducked. My knuckles barely brushed his cheek. “You can call the police, or we can never talk about this again.” I said. “But if you call them, look at me. I’m a scrawny 46-year-old woman. You have six inches and 75 pounds on me. Who do you think will win in the sympathy game?” I hated to play the mind games he used to manipulate me, but I knew a phone call could end a lot of things I liked about my life. Thanks for the memory, kid. Happy Mother’s Day.

Daniel picked up the phone and pressed it against his bloated face. Acne peppered his cheeks. His hair glistened with oil. He spoke before me: "I'm OK, Mom. They don’t pick on guys like me in here.”

How well he knew me. His gift: reassurance. False or true, I had no way of knowing. I no longer knew what kind of “guy” he was. I remember the freshman in high school who made his garage-band members sign a contract agreeing to practice. I remember closing my eyes the first time I watched him in the marching band, holding my breath, fearing he would fall during a move that required him to kneel while holding his trumpet. When I forced my eyes open, he amazed me with the grace of a teenager still growing accustomed to his new height and slightly overweight body.

“They wouldn’t let me bring you any presents, so happy birthday. When do you get out?” I love you. How could you do this to me? How could you ruin your life? What did I do wrong?

He talked about fried bologna sandwiches, shower shoes, and how he’d made friends with one of the guards. His voice sounded hollow through the phone. He never apologized. Never wished me a happy Mother’s Day. My anger percolated. The top of my head throbbed. He rambled.

“Stop it. Stop talking and listen. I love you now and always, but if you do this again, trust me, I am not visiting my son in jail when I’m 60. And you know what? I can’t do this today. I’m leaving.” I hooked the phone on the wall and turned away. The doors opened with timers, but I had to distance myself from Daniel. I took one last look at him. He put his hand on the glass. I surrendered and matched my palm with his.

Out in my car, I rested my head on the steering wheel and cried. Grief snatched my breath away. I wanted to vomit and purge myself. I screamed and cursed. Finally I looked up through the windshield. The sky faded into the pinks and oranges of a spent day, its beauty inviolate. A Mother’s Day irrevocable.