We Are the New Dutch Resistance 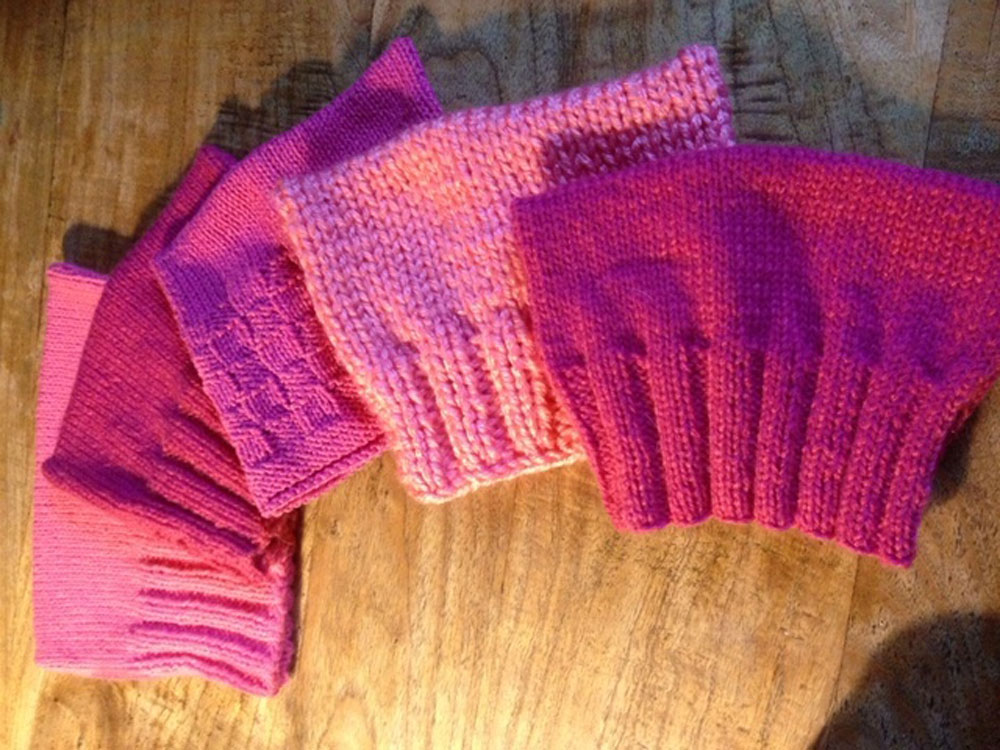 I’m sitting here in Isabelle Esser’s home, situated on a quiet canal in the picturesque 17th-century center of Amsterdam. The late-afternoon light reflecting on the homes across the canal, with two cats cuddled on the sill of an uncurtained street-level window, make our work space so very gezellig (one of the many Dutch words that is hard to translate, but essentially “beyond cozy, with a loving vibe”). This also shows the liberal openness of Dutch culture. People walking by can, and do, look in on us as we are knitting pink pussy hats and creating signs and posters for the many protests planned for the weeks ahead.

Esser, 53, raised three children as a single mom in this home. Her eldest, 27-year-0ld Mele, is a corporate accountant; Robbi, 24, is an accomplished rock musician; and daughter Soete, 19, studies biology at the university in the nearby city of Utrecht.

As she knits, Esser reminisces about the era when her children were young; “When I look back, I cannot believe I did all that. I don’t know how I got it all done. You know, picking kids up from school [and taking them] to swim lessons, recitals . . . all on bicycle . . . then this one has lice, and that one has dentist appointment . . . while working five days a week, and then all the household chores. . . . My biological mother did come to help one day a week, and my foster mother another day, so I was not completely alone. Still, it’s hard to imagine now that it all got done and the children turned out so well.”

I suggest that her education might have given her an edge. Esser has one of those difficult-to-translate degrees, but it’s basically the equivalent of a master’s in social work with a concentration in parental counseling. Back then, she had between 20 and 25 appointments per week with newly emigrated Moroccan and Turkish mothers through a government-funded program called Opstapje (literally translates as “little steps”). She provided support, counseling, and advice for these women on raising children in their new home city. She also established a spelotheek (a borrowing library of sorts), providing educational toys and materials for those families that could not afford to purchase them on their own.

After finishing off her second pink pussy hat of the day, Esser looks up online the several media outlets that covered the three protests she and I participated in the previous week. On the evening of January 20, we joined hundreds of people for the March Against Hate. All gathered in Dam Square in front of the city hall, which was built, interestingly enough, during the height of Amsterdam’s golden age as a testament to the city’s commitment to individual freedom and liberal glory. From there, we marched to the U.S. consulate. Approximately a two-and-a-half-mile walk, we stopped traffic and chanted, “No hate. No fear. Refugees are welcome here!” En route, dozens of folks in cafés and shops suddenly dropped everything and joined the righteous procession.

The very next day was the Women’s March. It began at Rijksmuseum, the grand and opulent home of the national museum of art and history. Thousands gathered and proceeded to march across Museumplein, past the Museum Van Gogh and the Stedelijk Museum of contemporary art, chanting “Women’s rights are human rights!” and “This is what democracy looks like!” The massive procession ended in front of the U.S. consulate. It was an amazingly beautiful rare blue-skied day, where women, men, and children showed up in full force and spirit. Their signs and songs suggested that they were there not only to protest the inauguration of the newly elected U.S. president but also in strong solidarity with women worldwide.

On Wednesday, February 1, Esser and I attended a last-minute rally to protest the travel ban of residents of Muslim-majority countries into the United States that had just been established by U.S. executive order. I found out about this event almost simultaneously through two very different sources—one through social media, specifically Holland Against Hate’s Facebook post, and the other as an alert e-mail from the U.S. consulate. I received a warning that the consulate was informed by local Dutch police that a permit for a peaceful protest was issued. Although expecting only 30 or so people to attend, the consulate strongly encouraged all American citizens to avoid the area during the scheduled hour of protest. Undiscouraged, we donned our pink pussy hats and with our signs bungeed to our bikes, we rode to this very specific area at the specified time. Joined by hundreds of others, we shouted, “Muslim rights are human rights!” and “From Palestine to Mexico, all the walls have got to go!”

There was a young teenaged girl there holding a sign in Dutch stating, “If you build a wall, my generation will tear it down!” With photographers and camera crews surrounding us, it seemed that the event was well covered by local media.

At all three protest rallies, people approached us, inquiring about our hats, and placed orders with Esser. She told them she sells each one for 20 euro but will make one for free for those who are out of work—that is why we are here in Esser’s home on this lovely afternoon.

As we continue knitting away, I ask Esser what her reasons are for protesting these American policies and issues. She is strongly concerned that the decisions being made in Washington, DC, are fueling extremist thought throughout Europe. I sense a fierce, angry tone in her otherwise mild-mannered demeanor, as she translates and paraphrases a piece recently published in Volkskrant (a just-left-of-center weekly newspaper). The article, “Allarmbellen” (“Alarm Bells”), was written by Aik Meeuse, an academic from the Anne Frank Institute (which works to implement racism awareness in Dutch schools). The publication lists the stages or characteristics of fascism. All is not lost in translation and sounds eerily familiar:

1. Exploiting feelings of uncertainty and insecurity for one’s own benefit (fearmongering)

2. Highlighting differences between groups of people, giving one group superiority over and more rights than the other group

4. Twisting reality for one’s own advantage

5. Denying truths that do not fit certain ideals and censoring those who don’t agree

6. An authoritative figure who breaks down democracy and democratic institutions

Esser goes on to say, “We have to be aware that these things are happening and do everything we can to resist. We Dutch are a very tolerant people by nature, but this is not something we can ever tolerate. We have to ‘Dump the Dutch Trump!’”

This has been a popular chant at all the protests we’ve attended. It refers to Geert Wilders, who is currently running for prime minister here in the Netherlands. (Elections in Holland will be held in mid-March.) Wilders and his Party for Freedom, or PVV, are extreme anti-immigrant nationalists. In the past, like Marine Le Pen (the group’s counterpart in France), PVV’s influence has been marginal at best. The recent political changes in the United States seem, to many, to have created a wave of extremism across the Atlantic. Most of the people I have spoken with here strongly feel that it should be stopped before reaching the shore.

On my way to deliver a two-hat order in the Eastern Docklands section of Amsterdam, I bike past the Lloyd Hotel. Now a chic boutique hotel, historically it was used to temporarily house asylum seekers. Going back to 1912, it was where large numbers of Europeans were quarantined and processed before immigrating to the United States. Pedaling on, I think to myself that this is not just a part of Dutch history, but of American culture, as well.

I arrive at the home of Mari Soppela, an award-winning independent filmmaker. Originally from Finland, Soppela, 50, has lived in Amsterdam for 25 years, raising her two children, Sanna, 22, and Ilari, 20.

As we drink tea, Soppela tells me about Achmad, a 27-year-old Syrian refugee who lived in her home for five months until the government found a house for him and his wife, Nora, 23, both from Aleppo. The housing shortage here in Amsterdam has been a cause of rising anti-immigrant sentiment. With a long waiting list, some feel that asylum seekers are getting housing at a faster rate than that of Dutch nationals. “It is understandable that this could cause tension and resentment in some communities,” Soppela states, “but this is a human tragedy of epic scale. We all have to work together to come up with a solution. The solution is not to ban entire populations based on their race, religion, or nation of origin.”

I first met Soppela at the Women’s March in January, and we became instant friends. I am presently assisting on the development and production of her upcoming film, Lasikatto—What Is a Glass Ceiling? It’s a global investigation of women that challenges viewers to take a closer look at how the invisible glass ceiling has affected our attitudes and interactions. The film will be released in 2018, but curious readers can log on to http://mrs.productions for a teaser.

Soppela’s reasons for protesting are clear: “All this hateful, sexist rhetoric by your new American president has got to stop! It is wrong on so many levels. Society is changing here, and everyone needs to be well informed and take responsibility before they vote. It is not just this, however. I march in solidarity with and in support for women worldwide. While doing research for Lasikatto, I discovered some astonishing facts. For instance, if we do not do more now, it is estimated that it will take 118 years to bridge the gender/wage gap in most nations globally. I protest against many of the sexist policies in order to empower women everywhere. We need to demand more for ourselves and market ourselves more effectively.”

Although Lasikatto is partially funded by the Finnish and Dutch governments, Soppela plans to establish a crowdsourcing online fundraiser. Delighted with the hand-knitted pink hats I just brought her, Soppela comes up with the idea of giving them as gifts to anyone who donates to the film’s production costs.

Now I ride back with an order for between 50 and 100 pink pussy hats. Smiling, I realize this means many more lovely afternoons in Esser’s gezellig canal home. Hopefully we will soon be joined by other knitting hands.

Melissa Breese, Solo Mom of Cyrus and Susa, graduated from Sarah Lawrence College and Rhode Island School of Design. An artist and educator, she splits her time resisting and persisting from her homes on Martha’s Vineyard and in Amsterdam.