Saying Goodbye to the Mommy-Wine-Drinking Culture 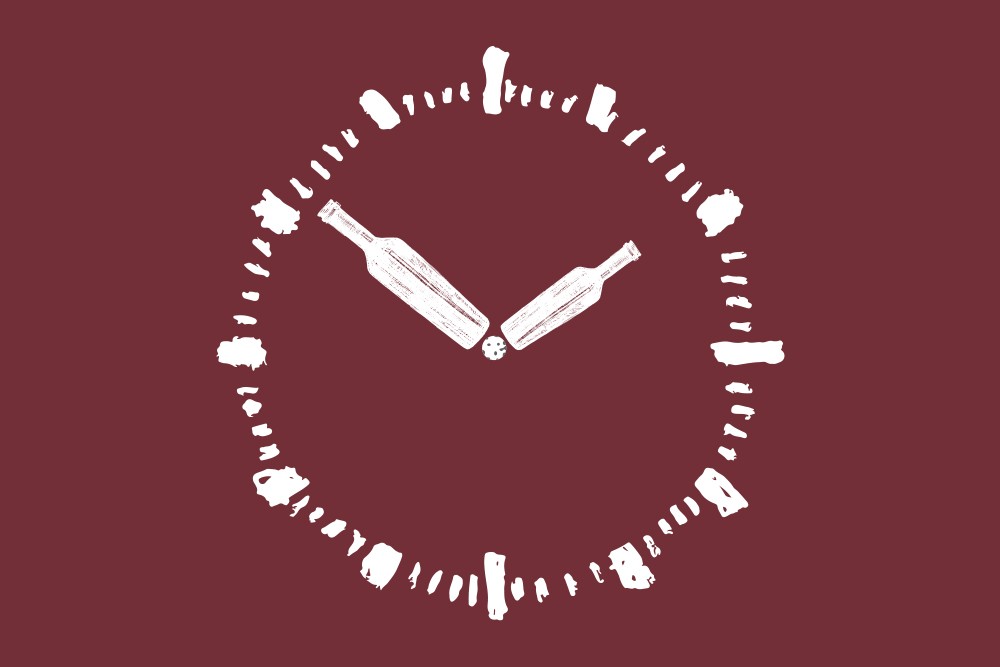 I whipped around surveying the faces of other customers. I don’t know at which I was more embarrassed—my then four-year-old’s unexpected announcement or that we were walking hand in hand in a liquor store midafternoon on a weekday. Sure I was on vacation, but something about his sudden declaration made me feel like my clothes had been snatched off in front of an audience of judgy eyes. My mom and I, quick with our recovery game, shut our gaping mouths and continued our stroll down the aisles, scanning the shelves for our favorites—chardonnay for her, Moscato for me. Love of wine is one of our shared pleasures. Whenever we fly in from our respective cities to visit each other, part of our reunion ritual is to sip out of beautiful glasses as we catch up on all of the goings-on in our lives. And when we’ve survived a particularly long day of resistance or mayhem waged by our beloved little one, we reward ourselves with as many glasses needed to lull us into a hazy state of calm.

And then there’s my mommy circle. My closest mom friends and I have popped corks in the name of myriad parenting wins and woes. We’ve proudly raised glasses while swapping success stories of first steps, potty progress, and first days of school. And we’ve secretly commiserated over teething stealing our sleep, obliterating tantrums, and biting back talk. I wish I could say we commune over wine only during mommies-only moments, but sometimes the need to neutralize our frayed nerves is so dire, our kids sit in the background laughing and playing as we sip.

I’m not a weekly drinker—most times not even a monthly one. And if ever asked how my alcohol consumption correlates to my parenting, I’d likely say something along the lines of “I like wine, I’m not an alcoholic, and I try to be the best mother I can be.” End of story.

It wasn’t until I began hearing and reading more about the normalization of the mommy-wine-drinking culture that I began to think seriously about wine’s connection to my own parenting. And when I did, I became surprisingly uncomfortable.

It isn’t the celebratory moments or those rarer occasions when I feel like I’m standing alone in the world that I’m drawn to a bottle of wine; rather, it’s always the days that begin with whines as nerve plucking as fingernails on a chalkboard or the pounce of a small body jolting me out of sleep that didn’t settle until the morning twilight. Or when I’ve gone through war, reconciliation, and peace with my kindergartner in the span of an evening. Or when I spring upright in the middle of the night, heart and mind racing each other as I fret over all that was left undone, which inevitably means more to do the next day. These are the times when I’m called to quiet all that roars within me with something sweet, soothing—something that can carry me up, up, and away.

How we suppress the stress

In Liz Tracy’s New York Times article, “Being a Sober Parent in a Wine Mom Culture,” perinatal psychiatrist and addiction specialist Dr. Leena Mittal of Brigham and Women’s Hospital in Boston says, “[T]here is a long history of chemical management of women’s distress.” It was not until I became a mother—a Solo Mom—that I found myself reaching for something on the outside to quell what swirled on the inside. Before becoming a mom, I’d curated this delightful image of motherhood that included a perfectly behaved child who brought nothing but delight to my life, days that passed with relative ease, and me—the poster mom for parenting done right.

But the truth is, nothing could’ve prepared me for the reality of motherhood: the one in which I’d struggle to breastfeed only for my baby to refuse to do so after a fleeting three months; the one in which projectile vomit would shoot out of his mouth during every feeding before he’d tolerate only the most expensive formula on the market; the one in which for almost three years, I’d walk around in a constant state of delirium because he slept no more than four consecutive hours a night; the one in which the terrible twos turned into the tormenting threes, then the ferocious fours, and now the feisty fives; the one in which my body tightens in terror at the thought of anything taking me away from him before he can take care of himself; the one in which on some days, I push back tears in memoriam of the prematernal life I had and didn’t cherish enough.

It’s this beckoning of motherhood yet feeling betrayed by it that engulfs many moms in shame—a brutal admission to make to ourselves, let alone to anyone else, so we don’t. We remain silent and carry on. As a mother participating in a 12-step program explains in Tracy’s article: “Mommy wine culture is just another way some moms are coping with the pressures of parenthood—alone and without much social support beyond acknowledging that parenting is hard.”

Reexamining our relationship with wine

According to the 2015 National Survey on Drug Use and Health, 15.1 million people in the United States suffer from alcohol use disorder, and, of those, 5.3 million are women. This statistic is likely to increase considering the steady marketing of wine to mothers as a socially acceptable elixir for their parental stressors.

I’m not yet at the point of swearing off wine, but I’m now more conscious of when and how I indulge. I try to avoid my son seeing me drink; I don’t want him to equate his behavior with my desire for it. I also pursue other ways to relieve my parental stress besides reaching for a chilled bottle—writing, walking, and yoga are my go-tos.

But when a quick escape from the calamities of motherhood lures me in with its sweet bouquet, rather than finger-pointing and assigning blame for why I indulge, I’ll mindfully have a glass for no reason other than on that day, in that moment, I want one. But it is the days when I resist the temptation and push through any stressors, anxieties, or fears that I feel most able, most equipped to mother without any crutch. ‘It is on those days, that I’m most the mother I strive to be.