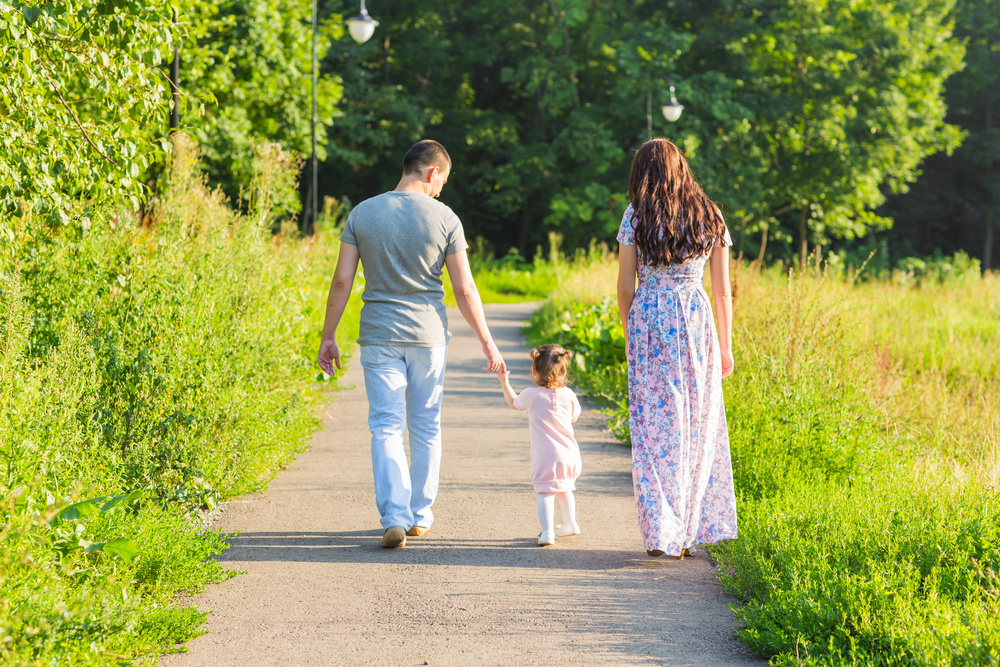 What I’ve learned from my narcissist baby daddy

Last week my daughter, her father, and I all went to this ridiculously overpriced thing called Tinkergarten, an outdoorsy workshop for city kids. My daughter’s father, whom I will call J, picked up my daughter and me in his car (it was my weekend to have her), and on the drive to the park, J and I compared notes on our daughter’s latest sleeping and eating patterns. The workshop was fun and muddy, and our daughter bounced between her two parents comfortably. My boundaries with J were very well tended, but I was not excessively on guard. I can honestly describe these 90 minutes with my ex as friendly.

It wasn’t always like this. I never imagined it would ever be like this. We were in court for the first two years of my daughter’s life, draining both my bank account and my energy reserves, while I stood stone-faced in windowless boxes listening to his lawyer spew lie after blatant lie to one of our many judges. It got so bad I would do the pickups and drop-offs only in a public place because that meant J was less likely to start a screaming fight with me, and if I couldn’t meet him in a public place, I secretly recorded our interactions on my cell phone (it’s legal to do so in our state) because I had become paranoid from all the lies he was telling about me both in and out of court. I didn’t need a clock to tell me when it was time for him to pick up my daughter for the weekend—my whole body would reflexively start shaking about 30 minutes before he arrived. There were times when I was so sure J was going to make my life hopelessly, permanently miserable that I did 3:00 a.m. Google searches for “Countries that do not honor extradition treaties with the United States” and considered moving (Iran, anyone?) with my daughter until she was 18.

Let me be clear: neither my daughter nor I were ever in physical danger. My ex is an emotionally abusive narcissist, but he is not violent or sexually predatory. Though I don’t think he is a great father (more on that below), I have never been afraid that my daughter was in imminent danger when alone with him. (If you are in a domestic-violence situation, please check out ESME’s comprehensive list of resources and articles.)

I’m not saying what has worked for me will work for everyone, but, damn, if it works for any of my fellow solo mamas, I want to share what I’ve learned.

Own your part, forgive yourself, but confess nothing to your ex

It seems counterintuitive, but acknowledging the mistakes you’ve made that contribute to the bad dynamic in your relationship is so liberating. It was too easy to keep the focus on J and all that he had done to me, which was a lot. He showed many signs of being a narcissist early on in our relationship, red flags I saw and chose to ignore. I had to realize that I was not only mad at him for treating me like an object (which is how narcissists view their romantic partners) but also mad at myself for letting it happen. I have a long pattern of dating narcissists and should have known better. It was important to separate the anger at myself from “what he did” so as not to add more fuel to the fire.

I also have a tendency to be controlling and inflexible, two traits that make dealing with a narcissist and parenting a child very difficult. I tried to force J to implement my rigid eating/sleeping schedule while our daughter was at his house, and when he didn’t do it, I raged internally. I stayed up for hours cursing him, hours I could have been catching up on much-needed sleep, and then I would be extra crabby and hostile with him when I saw him, which helped no one. Although I do not recommend “making amends” with a narcissist (they will use this honesty and vulnerability against you), it helped me to admit the truth to myself and trusted friends who could keep me accountable. Most of all, it helped me realize that although I could never change J’s behavior (a race toward futility I had already spent way too long running in), I absolutely could change my behavior, and it felt empowering and relieving to have something within my control to work on.

Do you want to be right or happy?

My daughter has beautiful, very curly hair. The one thing both her father and I have always agreed on is to keep her hair long until she is old enough to ask for a different style. But long, curly hair requires a lot of daily maintenance, something J is incapable of doing. She comes home every other weekend from his house with knots that take me up to an hour (not to mention countless tears and jelly-bean bribes) to brush out. I have tried to explain this to J in several ways: via e-mail; in person; via text; nicely; firmly; with ultimatums; with downloaded, printed “how-to” guides; with smiles and jokes. Nothing worked. Sunday nights remain the battle of the brush.

It was the same with nap times and bed times and J’s chronic lateness. Do I deserve to have my time respected? Yes, I absolutely do. Does my daughter need consistent care in the forms of naps and hair brushing and teeth brushing and something other than pizza for dinner? Yes, she does. But, as I have learned painfully and expensively, there isn’t a judge in family court who will take the time to weigh in on these little issues, not with their backlog of cases involving violent abuse and neglect. I could throw a fit and scream and demand that J change, but it is not only a waste of time but also a dangerous depletion of my resources. I’ve heard that a resentment is like drinking a vial of poison and expecting the other person to die. I have made myself sick over things I know are “right,” but that won’t change a thing. Instead, I use my time and energy alongside my intelligence and creativity to work around these challenges and let go of the idea that life should be any different.

The first time my nine-month-old baby slept overnight at her father’s house, I thought I was going to die. Worse than that, I thought of all the ways in which she could die while in his care. What if he dropped her? What if he got into a car accident with her in the backseat because he was texting and driving? What if he slept through her cries for help in the night? I made myself sick worrying. Eventually I had to accept the reality that the law states he has a right to visitation, and what happens during those visitations is not and never will be in my control. But that would be true even if I were happily married to my daughter’s father. It happens every time I drop her off at school or a friend’s house. One day all our kids will be grown up and living their own lives, and it won’t be our exes we project our worries onto but the world at large. Solo Moms, by necessity, learn the art of letting go early on, and it turns us into the spiritual warriors we need to be.

Narcissists will make you feel crazy. They make you doubt your own reality. They lie so much we sometimes wonder if they themselves forget what the truth ever was. They often are very charismatic and convincing to others who don’t know them well. It is not uncommon for them to turn mutual friends against you. I would not have survived the legal battle with my ex if it were not for my therapist, who validated my reality and helped me see that I had choices even when I felt powerless and defeated. I also found great comfort in support groups for people living with trauma, as a lot of my own childhood pain was kicked up in the battle with my ex over my daughter. I had to separate which threads of this big entanglement were from my past and which were in the present, and I could not have done it alone.

I used to spend the weekends my daughter was with her father “stress-cleaning” my house, “stress-watching” Netflix (a kind of fugue state in which you burn through three hours of a show without really watching it), and “stress-eating” everything in the kitchen. Let me tell you, leftover Indian on the same plate as leftover Thai and leftover Italian does not a calm stomach make. My daughter would come home, and I would be just as exhausted as when she was with me, maybe more so, because although I slept more, I expended so much negative energy worrying I was left depleted. I had to force myself to go see a movie with a friend and often cried in the theater, even during stupid comedies. But I made sure to pick understanding friends who would research ahead of time to make sure the movie had no tragic story lines involving children, and eventually I got over this phase. I started going to yoga. I started going to museums. I started dating! Recoupling is not the “ultimate goal” of the Solo Mom existence, and I resent very much when people assume it is, but it is a mark of health and self-love when you can allow yourself to enjoy this time without your child having grown-up fun!

You have to play the long game with narcissists. They will win a lot of infuriating battles. But if you stay sane and healthy for yourself and your child, you will learn you don’t even have to win the war: you can simply walk off the battlefield and live a happy life.

Do you coparent with a narcissist? What strategies work for you? Join our community for support and information on this topic and many others!