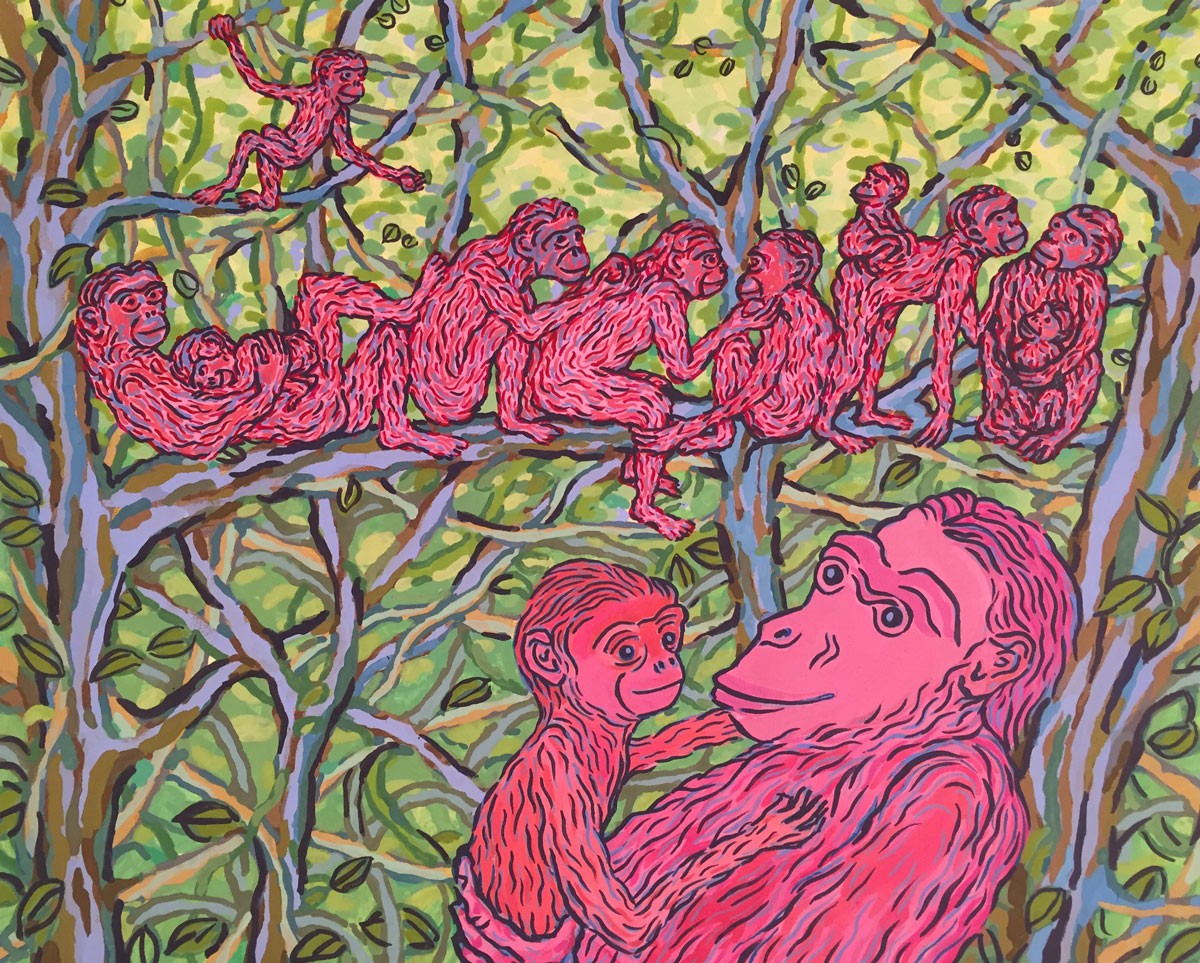 First of all, let’s get this straight: a bonobo is a pygmy ape, not a pair of men’s pants or a vineyard or a bar with a bad Yelp review.

What, you may ask, do I, a semi-respectable Solo Mom, have to learn from mostly vegetarian, cute-sounding primates? You may be thinking: Why do you want me to take lessons on how to behave like a hairy rain-forest ape? Just check in with me on Friday when there are no clean clothes left in the house!

Let me jump onto my feminist soapbox for a moment. For years, we’ve heard the clichés about the chimps who fight to the death for dominance and the females they drag along with them. This is the way of the world, we’ve been told. As Solo Moms, we have to fight to question those ideas. And bonobos, my friends, may give us the tools to do it.

That’s because, in addition to everything else we know about this highly intelligent primate, bonobos have a matriarchal, affiliative system of doing things. Male bonobos stay home and let their mothers decide with whom they should hook up. Female bonobos, like Solo Moms, venture forth to make their world better by joining new groups.

Fun scientific fact: bonobos and chimpanzees split off about the same time in our evolution and are evenly genetically related to the humans who came after them, which means that we are equally tied to a sex-crazed, considerate, matriarchal ape heritage as well as a violent, head-smashing one.

Bonobos kept to themselves in one part of the Democratic Republic of the Congo forests, which is why research on them is fairly new. They’ve been defined as a species for only about 100 years, or about as long as women in the United States have had the right to vote. For centuries before that, in a far corner of the Congo, the girls ran things their way, out of the way of chest-thumping King Kong types. And no one acknowledged them. Surprise, surprise.

It’s also very fun to say their name out loud.

My favorite quote from a recent New York Times article about current research on bonobos: “I sometimes think that bonobos sit up late at night reading papers about primates, and then decide to do the opposite,” said Joan Silk, a primatologist at Arizona State University. “They’re unusual in so many ways.”

Sounds just like how Solo Moms do things, right?

Here are some highlights on what’s so great about the great, endangered bonobo.

Female domination. Bonobos function in a matriarchal society; the females make the choices. The way female bonobos create social structure is by not sticking with the same old crew—these gals move around and find new friends in order to get on with their lives as adults. They learn a little give-and-take from new females. And the males in their world tend to listen when they get pissed. If they don’t, they get jumped on and pummeled and may disappear for a little while only to return missing the ends of their toes. Do not mess with a gang of females—and listen to your mother.

Inspiring? I hope so!

Sex. They like sex a lot, and that includes, kissing, cuddling, rubbing, and generally making themselves feel good. As biological anthropologist Frances White mentions, “They’re not always family friendly.” She actually observed one female creating a sex toy for herself. That may be why bonobos got that “hippie” reputation, as if they had dropped out of the “real” world, as if a bonobo and a conspiracy theorist avoiding chemtrails were the same. Some early primate anthropologists were so shocked by the bonobos’s “sexy time” behavior that they wrote their observations in Latin to make them sound more scholarly.

As ESME’s own P. Charlotte Lindsay has mentioned, sex isn’t easy in the urban jungle. Maybe we need a Tinder app based on bonobos!

If we took a cue from our primate sisterhood, we could enjoy ourselves more!

Sharing. Instead of fighting over food, they sometimes solve problems with some rubbing and “frottage” with each other, with their best friends, or with whichever male they choose. They don’t head off into pairs and refuse to share their galette recipes. They know that even if they started as strangers, they’ve built a community.

Problem solving. True, there are fights. And there is a top-boss female who tells everyone what to do and whose sons are the princes of their treetops. There are also mean girls (whose moms are boss) who act like bullies when they’re younger. But most problems are solved through negotiation, hugging and kissing, and sexual activity, male on male, male on female, female on female. Sex and food often go together. Why not be relaxed when you eat? Any male going a little crazy gets all the females joining together to reprimand him.

Females supporting other females. What a concept.

Survival. There’s speculation that bonobos learned to stick together to keep other foraging chimp tribes from stealing their food. They fought the warrior types with their alliances and slowly drifted away from them. Also, unlike with chimpanzees, infanticide is unknown. Keeping your offspring alive is more important than proving who’s boss.

As you can see, girlfriends, bonobos are a Solo Mom’s best primate friend. Get a picture of a cute one, and put it on your inspiration wall. Even in nature, it’s not a man’s world.

And the next time someone starts yammering about men running things, the way things have always been, yadda, yadda, just look them in the eye and say: “Check out the bonobo!”