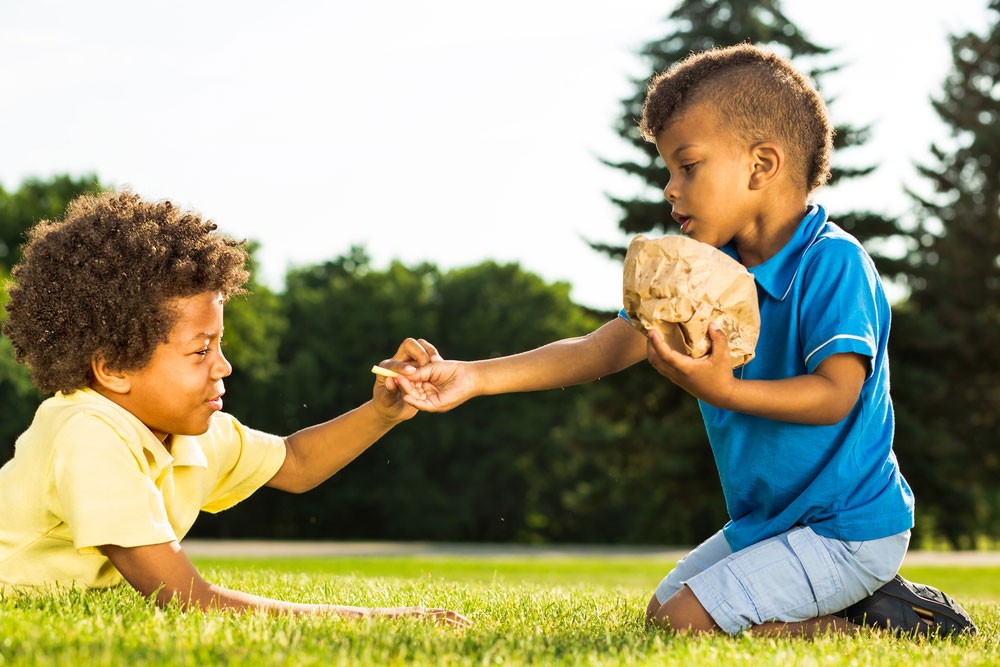 Had my ex been a good sharer, would we still be together?

“Mom! He licked the hummus again!” My 10-year-old son’s yowl summoned me from the laundry room into the kitchen, where I found him wearing an exaggerated mien of disgust.

My daughter was holding an open lemon zest hummus container with an undeniable tongue-shaped gouge in the center. She chimed in: “Now no one else can eat it!”

I’d gone grocery shopping the Friday evening before; the fouling bandit had struck sometime between nightfall and early Saturday morning. I investigated our refrigerator inventory before confronting the culprit. Two tubs of garlic hummus had the identical tongue mark, as did the guacamole; there was a dribble down the side of the orange juice carton, which meant it had been polluted by backwash. Same with the skim milk, but I’d overlook that, since the kids and I drank only soymilk.

I marched into my then husband’s study, evidence in hand. My abrupt entrance startled him, as did my accusatory scowl. He froze. Lanky, six four, sporting white, baggy boxer underwear, T-shirtless, salt-and-pepper hair askew, sitting in front of a giant Apple computer screen, he looked perfectly peculiar, just like a hummus licker. I glanced at his monitor; it displayed a used-electronics auction site. He was bidding on vintage calculators again. He already owned 30.

I skipped pleasantries and proceeded to the point of my intrusion. “Quit being gross. Use a cup and a spoon. I bought three containers of hummus, a vat of guacamole, and a gallon of OJ.”

Our marriage counselor advised me not to use “why” questions if I wanted to discuss a matter with my husband. Whys were demeaning and combative, she said. At that moment, I didn’t give a flip about decorum. “Why claim food when there’s enough for everyone?”

Husband folded his arms. His bare foot began involuntarily tapping against the plastic pad under the wheels of his desk chair. Tip, tip, tip, tip . . .

Time was on my side. I knew if I silently stood my ground, my husband would eventually answer. Also, he was trapped. I was blocking the only exit door and invading his space.

Tip, tip, tip, tip . . . His screen went into sleep mode right before he confessed. “I didn’t want to share.”

While in preschool, my children loved Barney. Episodes of Barney & Friends played repeatedly in our VCR, and the kids and I sang along to purple dinosaur music tapes in the car. I recall one particular song, “Share your Stuff.” The refrain went something like this:

It’s not so tough to share your stuff with a friend.

When a friend comes over to play,

It’s not nice to say

When I met my ex, he was educated and successful but unbeknown to me, in desperate need of Barney training. I was a widow with two young children, cats, dogs, and a hermit crab. He was a childless divorcee who joked on our first date that he was the center of his universe—he claimed all doctors were.

Doctors care, right? Sharing is a form of caring. I thought everyone shared. I borrowed stuff and lent stuff to my family and friends all the time. My departed ex never minded if I wore his favorite ball cap or drove his Jeep.

During our courtship he’d been generous—concert tickets, expensive vacations, jewelry. Nevertheless, I should have seen warning signs. Before we married, he invited me to a sailing regatta. The weather changed from hot and sunny to chilly and stormy. I didn’t bring a jacket. He had two in his car. I asked to borrow one. My then-boyfriend paled and insisted on buying me my own overpriced windbreaker from the event’s clothing vender. Splurging is a form of not sharing, which proved worse after we married.

Long before food fouling began, he refused to move into the house we bought together. When a hurricane destroyed his house five months after the wedding, he had no choice but to share our unscathed domicile. I wasn’t allowed to borrow his new car, and the kids weren’t permitted to be passengers in it, either. When we went out as a family, ex drove my SUV. He didn’t like sharing sheets, and if I used his pillow, he bought a new one. Eventually, my ex moved into the guest room and soon after took jobs that required him to live solo far away. It was during visits that he claimed food.

No amount of counseling helped. I wanted out. The rest, as they say, is history.

Had my ex been a good sharer, would we still be together? No. However, had he not licked the hummus, the children and I might be inclined to have a more friendly relationship with him all these years later, perhaps even send him a birthday card or buy him a Barney tape for Christmas.

M.M. Anderson is a Solo Mom and sophisticated sophomoric writer who takes readers on a romp deep into the realm of imagination, where the fantastical becomes real and the everyday otherworldly.

She is presently the Boss at Little Shop of Writers. Her one-woman company hosts business and creative-writing workshops; facilitates free online teaching videos; and publishes books, including Happily Never After Midnight (a collection of short stories) and Werewolf Dreams and Werewolf Love, the first two books in her Seamus Sullivan, Werewolf Cop young-adult series. Learn more about M.M. Anderson and her works on her website, littleshopofwriters.org; you can also follow her on Twitter at @LswMmanderson.