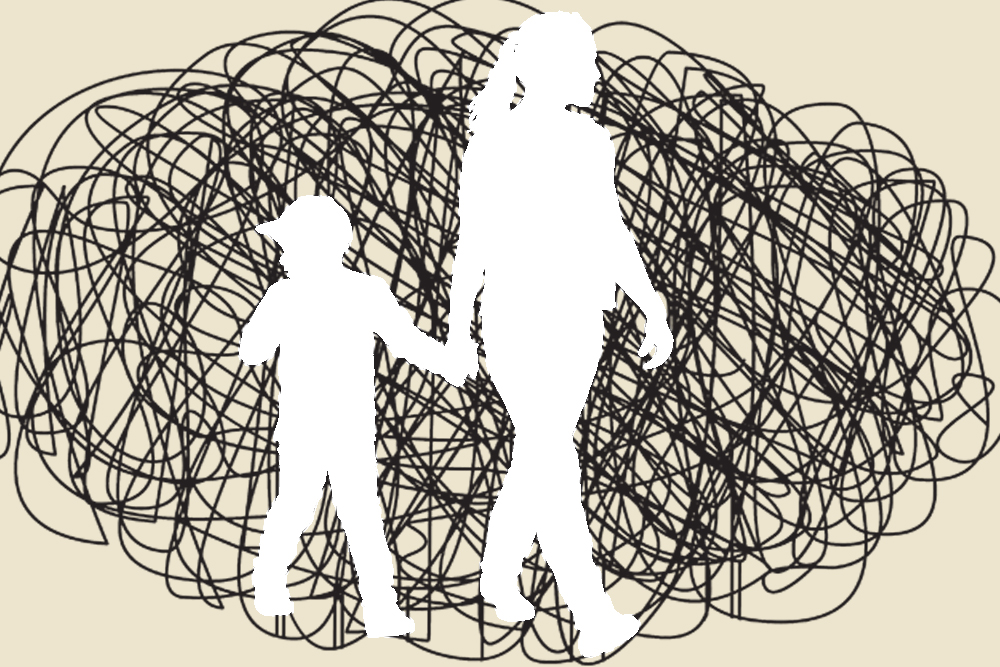 Eleven years ago, I stuffed my Suburban with garbage bags full of the belongings I was taking with me to start a new life. My husband, at the time, put my two babies, one and three years old, in the front seat of his pickup and stood outside it, mocking me derisively as they watched, oblivious to the significance of the event. After I stuffed in the last bag, I collected my two babies and secured them in their car seats. Bella, my yellow Lab and best friend, was in the passenger seat, and I squeezed in the cat carrier on top of the bags between the children. Living on an island, we drove about a half mile to the ferry terminal. I got the car in line and numbly unloaded the children to go into the terminal and get our tickets. While the children played, the length of our upcoming journey began to set in. We’d spend two days on the ferry traveling from southeast Alaska to Bremerton, Washington. There, we’d disembark, and I planned to drive over the North Cascades Highway to Montana to avoid the Seattle traffic. Returning to the car, I steeled myself for the journey and spoke excitedly to the kids, masking my true emotions. It was dark at that point, and we were just getting ready to load when there was a tap at the window. It was him. He wanted me to take his laptop and the camera, and was shoving them through the window at me. I stared at him incredulously and pulled them into the car as he yelled goodbye to his children. And, just like that, he was gone.

That night, after the kids were soundly sleeping in the cabin bunks, I got up and stood looking out the ferry window at the pitch black water and sky. Somewhere from deep within myself I gathered the strength for our journey, and we passed the next two days uneventfully on the ferry. Being alone with my two babies was nothing new to me, as I’d had only two breaks from them in three years. The first was when my daughter was 18 months old, and I had to take a two-hour exam for my teaching certification. The second was a weekend trip to see my old friend Ashlie in Seattle. I didn’t really count that, though, because he’d called me the first night I was there and told me he was going for a walk (while the children were sleeping). I told him he couldn’t do that, they were babies, what if they woke up—and he got mad at me. The rest of my time in Seattle was a living hell as I counted every hour until I had them safely in my arms. After that, I never left them again. I literally spent every hour with them, so being on my own with them was not a burden for me. All I remember of that ferry trip was when we passed from the inland passages of southeast Alaska and for a spell were on the open ocean, where the swell rocked us considerably sideways, alarming passengers not familiar with the roll of the sea.

Arriving in Bremerton, I loaded the children in the car, let the cat out of her carrier, and put Bella in the front seat. As cars began to unload, I took a deep breath and told myself I had this, I just had to get to the exit for the North Cascades. Heading up the plank off the boat, I glanced to my right and saw a couple of good-looking guys watching us unload. It took me a second to realize it was two of my brothers. Tears poured down my face when I pulled off, and they ran up to greet me. I held them, trying to borrow some of their strength. We set out, me following them as my children didn’t want them to drive us. Climbing onto the busy interstate, I stayed as tight to them as I could, but it seemed if I opened up more than a few feet, a car got between us. That’s when it hit me, and suddenly I couldn’t breathe. I stuck my arm out the window, waving wildly and heading for the nearest exit. My brothers followed and after we pulled off, agreed to get me to Snoqualmie Pass. With my middle brother, Jess, driving, we set out again. I concentrated on not looking at the road and all the cars. We got stuck in another traffic jam, and I laid my head down on the seat, overwhelmed by the sound and the motion. “Just talk to me,” I told my brother, and he rubbed my head, talking away. Finally we were clear of it all and pulled into North Bend for something to eat.

Whatever confidence I had drained from me when my brothers arrived, and after the white-knuckle drive, I seriously doubted I could make it to Montana. But I had two young children with me, and I knew if I could get to Montana, I’d be OK. So, after lunch, we said our farewells, and I toughed it out to the top of the pass and pulled into a ski-resort parking lot. I turned off the car and said to my kids, “I can’t do it; I just can’t do it.” And you know what those little buggers did? They both looked at me and said, “Yes you can, Mom. You can do it.” I pulled every last bit of reserve I had in me and drove that car full of garbage bags that were slapping in the wind from the open windows back onto the highway. Milepost by milepost, exit by exit, I made it to Montana. I will never forget the comfort I felt when I left the busy freeways of Washington State for the quiet Montana highways. But what I remember most is the first time I saw Flathead Lake in the distance and the tears that poured down my cheeks. The mighty Mission Range was still there, peached in the early spring twilight, and it smelled like flowers as we came into Polson. We had Van Morrison cranked loud, and we were singing. My cat, Green Eyes, was flattened out like a pancake lying between the kids on top of everything with the wind blowing across her fur, and Bella stuck her nose out the window.

I’d made it, but only to Montana. The journey back to the strong woman who first got off that floatplane in Pelican, Alaska, continues. It’s been 11 years, and though I get glimpses, much of her still eludes me. I may be only a shell of that woman, but I’ve done all right. With the encouragement of my two little bugs, we’ve come a long way from Snoqualmie Pass.

Do you have a story to tell? We’d love to hear it! Please share it on Voices.