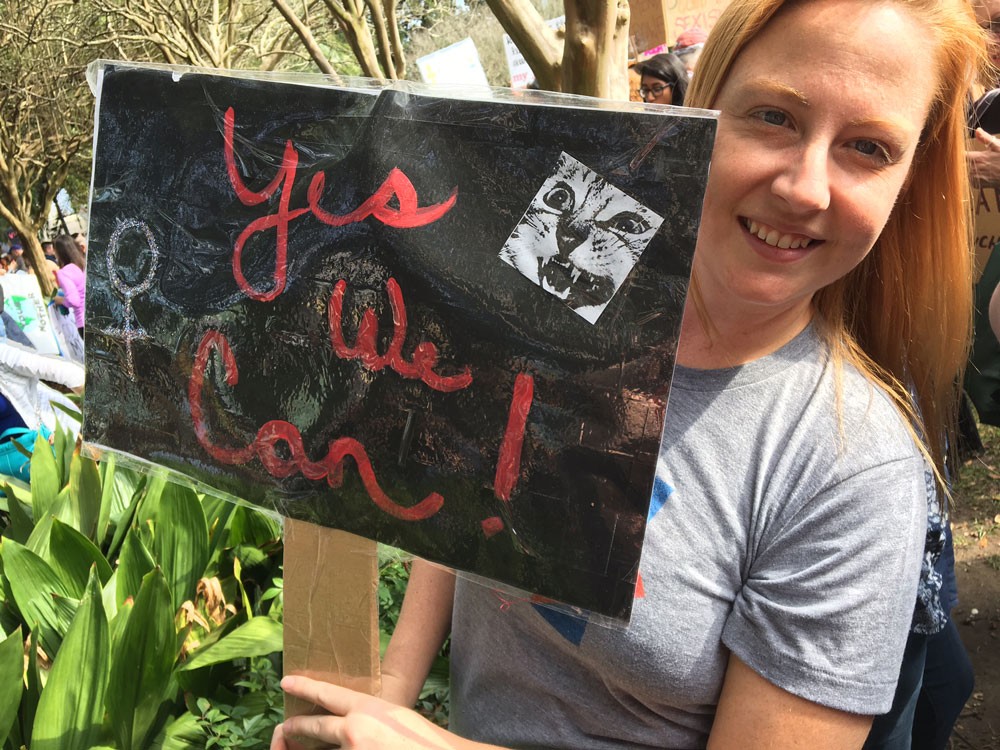 There was no whining or anger, just togetherness and a few jazz bands

Within hours of more than a half-million people converging on Washington, DC, for the historic Women’s March, I was hoofing it down Elysian Fields Avenue to New Orleans’s sister march.

The temperature was in the 70s and humid. (Is it ever not humid here, you may ask? The answer is no.) Too hot for a pussy hat but just the right weather for my Hillary Clinton campaign T-shirt. I had ordered it to have a piece of history, but that was the first time I’d worn it out in public in my reddest of red states.

As a single mom, it wasn’t as easy as it was for some to get there. I didn’t have a husband or partner at home to watch my child while I got my march on. And I wasn’t entirely sure who to call who would be supportive of where I was going, or at least nonjudgmental about it. So I called my like-minded realtor and asked if her daughter wanted to make some money that afternoon.

I kissed my son goodbye and headed out the door with my friend Jill, a fellow self-proclaimed “nasty woman.” To us, this march was about more than holding witty signs and walking through the pulsing streets of New Orleans.

It was our chance to start making a difference, to change what we feel is unjust and dangerous behavior. And make no mistake: there’s been a lot of behavior that is dangerous—from the new White House down to friends and family eviscerating one another on Facebook.

It was a moment, and I wanted to be part of it. I don’t want my son to grow up hearing so-called locker room talk about grabbing a woman’s vagina. I don’t want him to know that Mommy had to choose between new shoes and his breathing medication.

From the legions of LGBT marchers to the volunteers who acted as peace officers should it have spiraled out of control, from the young kids who decorated and carried their own signs to the faces of all shades and ages who marched and cheered from the sidewalks—it was a peaceful and lively march through the French Quarter to City Hall.

And being New Orleans, it was a hell of a lot of fun, too. I marched alongside a giant walking vagina and her sidekick who carried a sign proclaiming “Viva La Vulva.” There was an only–in–New Orleans “second line” (a musical parade within the march). Marchers quickly ducked into the route’s dozens of daiquiri shops and bars to grab some adult refreshments before getting back on the road.

The signs were both powerful and hilarious—from a giant, sparkly Ruth Bader Ginsburg proclaiming “I dissent,” to a quickly scrawled “We are souls, not holes.” There was a sign proclaiming “Girls just want to have fundamental rights” and signs calling for the Affordable Care Act to be repaired, not repealed.

There’s a lot of rhetoric going around about how we were man-bashing “angry liberals” or “whiny liberals” or how obscenities were spewed from the marchers. I trust those people did not attend a march.

Because if they did, they would have seen what I saw: a lot of energy and a lot of people hoping for something better. I didn’t see anyone who was angry, and no one was whining. No one was hurling obscenities. In fact, our march could even have been called family friendly, since so many kids were there marching, riding on their parents’ shoulders, or sitting in wagons and strollers.

As for the man bashing? Didn’t happen. We walked shoulder to shoulder with men. As we snaked our way through the French Quarter toward Canal Street, a man caught my eye and yelled, “Thank you!” “Thank you!” I yelled back. He was a middle-aged white man.

I don’t know if any of this will make a difference. I hope our local legislators and members of Congress and governors will be more willing to have a conversation about what makes a good quality of life for all their constituents.

But change comes one step at a time. And I haven’t come close to wearing out my walking shoes.