On Writing, Activism, and Single Motherhood: A Conversation with asha bandele 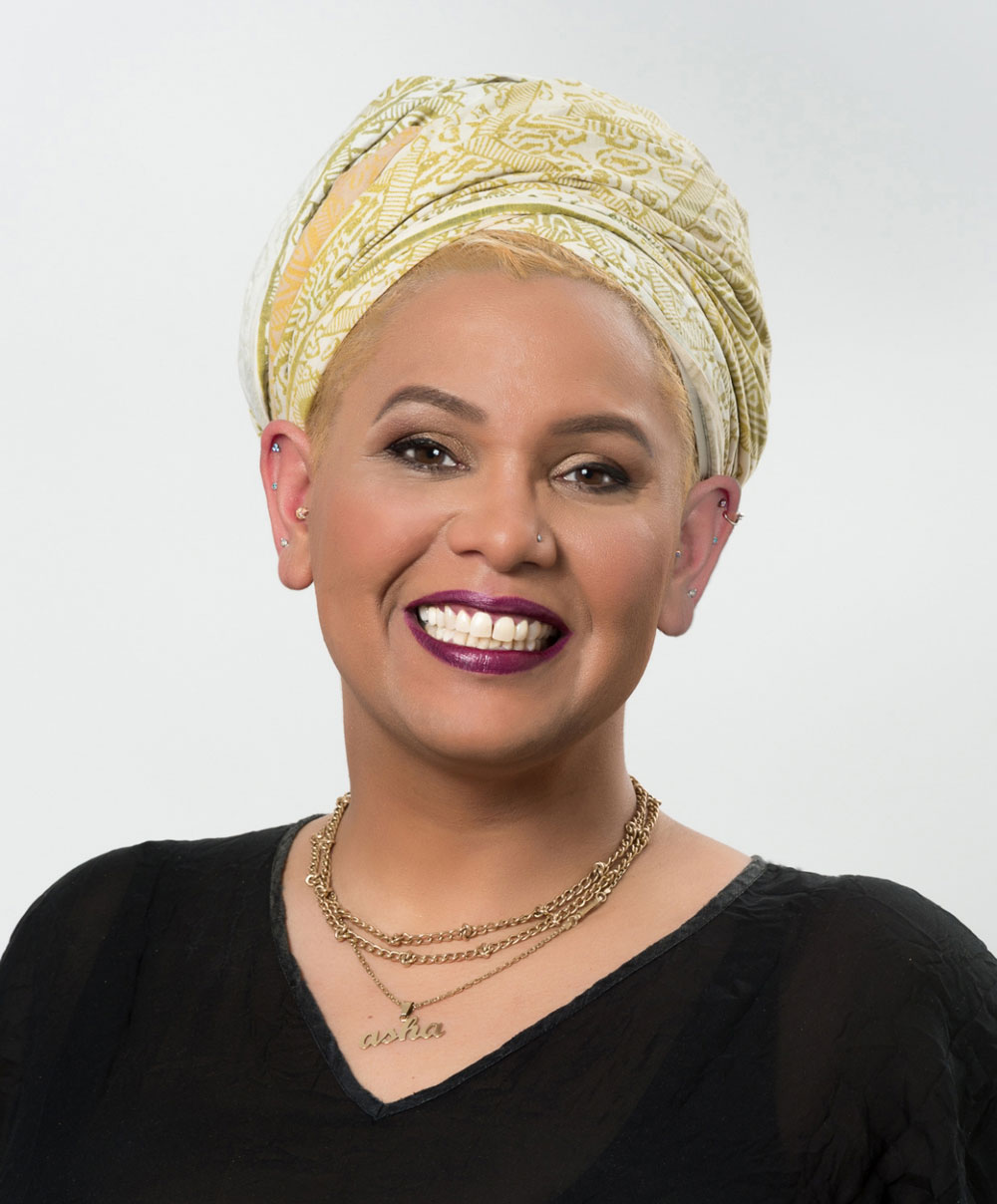 asha bandele is a pioneering writer and social-justice activist. In May of 1999, her award-winning memoir, The Prisoner’s Wife, was published. The critically acclaimed book chronicles her relationship and marriage to a man serving a 20-years-to-life sentence in the New York State correctional system. In it, she lifts the veil of maltreatment and degradation endured by countless women who courageously dare to support and endure with a loved one who is incarcerated. A decade later, bandele’s second memoir, Something Like Beautiful, was published in which she candidly shares her journey as a mother rearing her daughter without the physical presence of her husband, who was deported following his incarceration. She also vulnerably details her then battle with alcohol abuse, depression, financial insecurity, and an abusive postdivorce relationship. This book, a must-read for single mothers, exemplifies resilience, determination, and the transcending power of love shared by a mother and child.

In addition to her two memoirs, bandele has written two poetry collections, Absence in the Palms of My Hands and The Subtle Art of Breathing; and a novel, Daughter. Her writing has also appeared in the New York Times, the Nation, Vibe, Ebony, and Essence, where she was a features editor for the magazine. bandele currently serves as the senior director of grants, partnerships, and special projects for the Drug Policy Alliance in New York City, and her most recent book, When They Call You a Terrorist: A Black Lives Matter Memoir, which she coauthored with Black Lives Matter cofounder Patrisse Khan-Cullors, is receiving widespread acclaim. ESME recently spoke with bandele about her writing, long-standing activism in criminal-justice and drug-policy reform, and her single-motherhood journey.

A: Writing has been my way of mapping my life. As a woman, this is particularly significant. Men are widely covered and analyzed in newspapers and books. The same has not been historically true for women, and Black women especially. Memoir and other forms of autobiographical recording allow us to say that we were here. When The Prisoner’s Wife came out, no one was talking publicly about the experience of marriage or love or family within the context of the carceral state—except in pathological terms. Memoir, then, has been my way of not only charting my own travels but also publicly complicating the usual narrative.

Q: You’ve also tackled the issue of shame in both your writing and interviews. Shame, for different reasons, is something we have all experienced—particularly those of us who have been impacted by incarceration. Considering the circumstances under which you met and fell in love with your husband, did you have any reservations about sharing your story?

A: Shame is a powerful social weapon. When you don’t look the same or do the same things as other people, you are not considered part of the community. When I wrote The Prisoner’s Wife, I felt a tremendous amount of fear, especially about shaming and embarrassing my family. And at first, I wanted to tell my story as a novel, but it felt dishonest to the general ethos I hold that we who love people in prison have nothing to be ashamed of. Ultimately, that overrode my fear. And similarly, in Something Like Beautiful, it was hard for me to admit that at one time in my life I was drinking too much. But in unpacking the story, the whole of it, I hoped I could be a touchstone for other people’s healing.

Q: You are a senior director at the Drug Policy Alliance. Can you discuss how you came to be in that role, and why you have been so invested in maintaining such long-standing activism on behalf of Black and Brown lives both inside and outside the criminal-justice system?

A: I came to the Drug Policy Alliance following a postgraduate fellowship at Columbia University. I didn’t expect to stay long, but the work, in particular the areas of my work that were focused on the people I engaged with in the field, anchored me deeply to the organization and its mission. I came to believe that transforming drug policies would have a deeply transformative impact on how we see one another as human beings. The most “progressive” among us will throw away a mother who uses drugs problematically rather than provide support to guide her to becoming whole. It doesn’t make sense.

We don’t do that with other choices that are potentially harmful. Driving cars kills people in huge numbers, for example, but we don’t say don’t drive. This is because we know that driving provides an easier way, often, for people to navigate their lives—even as we know it can be deadly. But the benefit trumps the harm, so we say let’s provide seat belts, airbags, traffic rules, and car seats to reduce the harm.

Drugs are often a person’s best way to navigate the day. Sometimes it’s alcohol. Sometimes it’s Adderall. Sometimes it’s an antidepressant. Drugs are with us. But instead of putting measures in place to ensure their safest use, we let people die—and that allowance is rooted in a morality that has no place amongst those who are truly committed to life and humanity.

Most people not only recognize the futility of the drug war but also have highlighted the white supremacy embedded in its birth and execution. Most know, whether or not we admit it, that there’s been no recorded history of a drug-free society, and because that’s true, it is just common sense to have policies in place that would reduce the harms associated with drug use—most of which is never problematic. From marijuana to heroin, addiction rates of those who use are never more than 20% or so. The questions then become, How do we properly ensure that their use is not criminalized and they are not harmed by their choice? and What measures do we need to put in place to secure people whose drug use is problematic? We know that access to health care, replacement medications, jobs, love, and the certain sense that your life matters are some of what move people toward living a life that is full.

Our job is to end the harm caused by the drug war, which is far worse than the harm caused by drug use. Overdose [OD] can be prevented with harm-reduction measures in place, rather than an unrealistic push for abstinence. Portugal decriminalized drugs, including heroin, in the midst of an OD crisis, provided methadone and other harm-reduction measures, and now it has some of the lowest OD rates in Western Europe. But beyond that, we have to change policing that targets communities deemed enemy territory—because there’s always enemy territory and enemies in war. But between preventable death of drug users and the structural racism in policing, the harms of the drug war far exceed the harms of drug use, and that’s what I want to see end. I want people to live.

Q: What are your feelings about the activism and creative work surrounding the issue of mass incarceration with the writing of books such as the The New Jim Crow, and the films 13th and Time: The Kalief Browder Story?

A: Telling personal stories brings home reality in ways sometimes the recitation of facts does not. And I’d add to this list Dr. Carl Hart’s seminal work, High Price: A Neuroscientist’s Journey of Self-Discovery That Challenges Everything You Know About Drugs and Society. Stories allow us to see ourselves, our families, within the frame of policies that are killing us. And when we see human beings, not just numbers or “convicts” or “junkies,” we can begin to courageously ask ourselves, How in the hell did 2.5 million people go missing on our watch? How did we let our people get put on the trains and buses to prisons and jails for decades with almost not a word? And how do we ensure we are never silent in the face of any future attempts to write, wholesale, people out of society?

Q: Switching to the subject of single motherhood, although married at the time, due to the incarceration of your husband, you have reared your child alone. You candidly and beautifully detail your single-motherhood journey in Something Like Beautiful. Can you share your thoughts on why to this day there remains a societal slant toward the stigmatization of single mothers, and particularly toward single mothers of color?

A: Society doesn’t hate all single mothers. It hates poor single mothers. It hates Black single mothers. But then Black women have never had a right to their own bodies or children—married or not. This was true during slavery, and it’s true today in all the ways our motherhood is policed by doctors, teachers, and others who are mandated reporters who look for any sign of something wrong. I grew up around abusive white mothers and fathers for whom there was no intervention. But I have seen Black mothers stalked by social workers and others who, consciously or not, believe that Black women have little capacity to do anything well. Black mothers, in particular poor Black mothers, are pathologized, while all the choices that enforce and sustain poverty are let off the hook. And here, I haven’t even gotten to the issue of police and the targeting of Black children. Despite being afforded a great many privileges in my life, I lived in fear for years, and for no rational reason, that someone would call child welfare on me and I would lose my child.

Q: As you wrote in Something Like Beautiful, your daughter was one of 3,000,000 children of currently incarcerated parents in the United States. What advice would you give to families who have a loved one who is incarcerated, especially those that include a parent who is imprisoned?

A: There is no one size fits all. Every family is different. But we can begin by critically thinking about what it means to criminalize a person, and who gets criminalized and who does not. We can all work to end mass incarceration and mass criminalization. We need social interventions that are as huge and encompassing as the social intervention prison is. We can ensure in the media and in our social-justice organizations, that the truth, the whole truth, is told, no matter whom it makes uncomfortable. We can stand at the ready, courageous, to face the reckoning the mass criminalizing of two generations of people has caused.

Are you a Solo Mom whose family has been impacted by incarceration or substance abuse? Join our Community of Sisters for support and connection from other moms who’ve been there.