The First and Last Beating 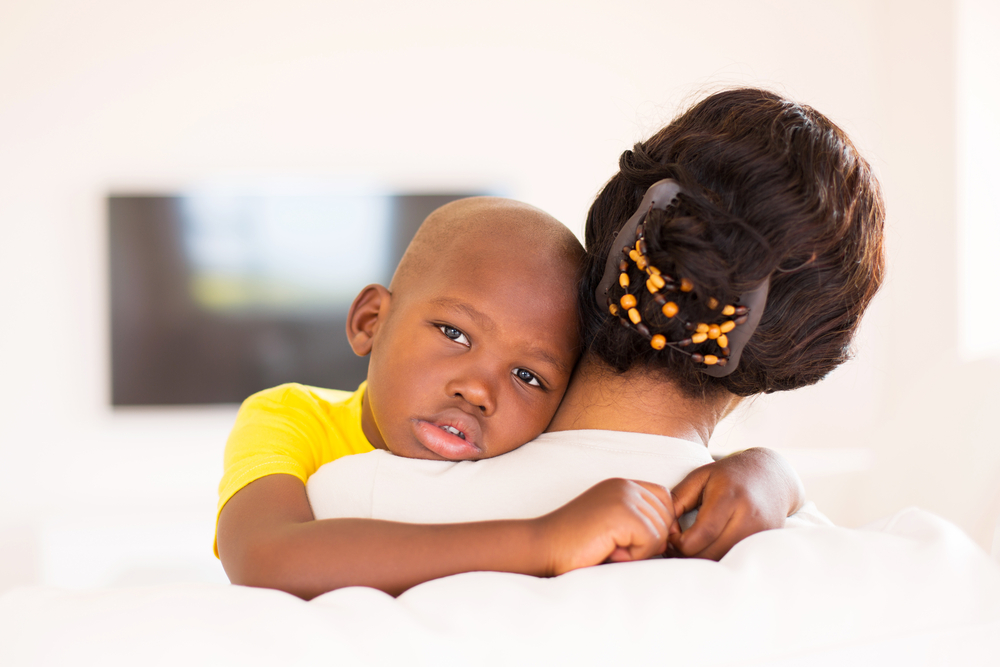 An Essay Showcase Award submission about raising a black son


[L]iterary art responds by . . . honoring its responsibility to inwardness, to that slow and silent waltz with the self, to those aesthetic glimpses into wisdom and beauty, into evolved versions of ourselves. —William Geraldi

It was the first and last of beatings. Fear blurs distinction between fact and reality, his body limp, twisted, lying in a pool of warm scarlet liquid. Midsummer humidity makes it hard to focus. My fast walk turns into a nervous jog, tiny rivulets of sweat collecting at my temples, forehead, and eyebrows. I cannot control kaleidoscopic awareness of things like the tightness around my heart or warm, shallow fear-breath. An image of a white facecloth used to bathe him that morning floats in darkness. Frightening images. Blotchy blood patterns on the soles of a young driver. A child running fatefully into a busy inner-city street. “Ohaji! Ohaji! Ohaji!” I nearly wailed. “Oh, God, where is my child!” In 30 more feet, I half slid, half jumped over the small grassy hill in front of our low-income townhome. Insane milliseconds swirled into eternity. The sickening stench of burnt rubber suffocates wafts of honeysuckle vines growing among weeds and bushes in a trash-collecting ditch alongside the paved sidewalk. Instinctively, my right hand flies to my heart as if to slow down fast, depthless breath. Up and down the street I searched for him. Behind me. How did I allow this to happen? Oh, God! What was I doing trusting him to stay where I could see him? Why isn’t he here? Where is my baby?

Ten minutes more or less passed before I fatefully found my little boy. I gave thanks for merciful divine intervention: Thank you, God; thank you, Mommy; thank you, ancestors; thank you, guardian angels; thank you, universe, my higher self. . . . I was still whispering nervous appreciation, my eyebrows in a furrow from anxiety, as we headed home with me bombarding him with questions he couldn’t possibly answer.

The great relief spying my four-year-old’s long legs peddling hard on his Big Wheel in a effort to keep up with his new and slightly older friend, Waquen, just as irrepressibly transformed into a different brand of dread.

While few if any people in America escape the nature of contemporary culture’s incredibly incessant reminder of inadequacy, in language signifying exclusion, rejection, denial, and demonization, the dire, unremitting messages loom for single black mothers living on the edge.

Unfortunately, our experiences often get buried in the sand heap of postmodernist absurdity. For a single black mother raising a black child anywhere in the United States, the tension between predictable and unpredictable parenting tasks requires perpetual attention to peculiar race- and gender-filtered life-and-death issues, be it consciously or not, 24 hours a day. Overwhelming. We sublimate the fear of losing our precious babies to mean, unforgiving, violent streets; ineffective school systems; overwhelming rates of incarceration; drug addictions; chronic unemployment; rape; police harassment; disease; death; and disfigurement that institutionalized racist, homophobic, classist, and sexist traditions recycle. Unable to imagine life without my child, I worried. What awful thing might beset him if I did not take some type of strong action—get it in his stubborn little head that he must listen and obey? Begrudgingly, I beat him. Only stark, sullen fear shored courage to go against deeper sentience and understanding. Decades later, I cringe with that awful decision.

Spare the rod and spoil the child, or so my Christian upbringing gloriously rationalized. Nothing in me believed in the premise, however. My own childhood experience served as my guide.

Not listening and obeying adults comes with the territory of growing up in some families. Not mine. Parents created strict rules never to be questioned. Punishment for being disobedient, rolling the eyes, pouting, performing poorly in school, disrespecting adults, stealing, lying, and doing anything that could be remotely interpreted as “trying to be grown” involved, except on rare occasion, lashings with a strap or wispy tree branch. More likely to be praised for being smart and obedient rather than difficult, I can count the few beatings I suffered and those I talked my way out of.

Unlike my overprotective foster grandparents, my own child-rearing skills amplified verbal communication that involved explaining consequences, rather, laws of cause and effect. Temporarily withdrawing privileges even though not as effective as my expressed disappointment in my son, usually worked like a charm. Despite the fact that I was a recent Spelman College graduate, I was too inexperienced, too young, to appreciate a process that failed to work unequivocally. Although easy to love, teach, and live with, my son was irrefutably headstrong.

The day I prayed my child was not dead or lying somewhere alone wounded, I was as I remain today cognizant of and displeased with the fact that I relied, first for confidence and strength in child-rearing matters, on a complex cultural premise handed down over four centuries of Africans in the Americas still struggling to be free.

So it was the first and last of beatings he got from me. Even though his father and paternal grandparents saw the matter of beating children differently, I would not in the future rationalize my position of power as an adult or rationalize and suspend the fear, surprise, and confusion in my child’s eyes, his howls of pain begging mercy for the sake of what—really, my own insecurity? Ignorance? Each punitive hesitant lash (about three) meted from a black leather belt stinging his tender skin challenged my Spirit. My soul.

Moving between spaces of harmony and disharmony has never been facile for me. Following the licking, I hugged my son, salty tears gathering at the corners of my mouth. After lunch, I read to him our favorite story, Frog and Toad. He slept. I continued reading Self Mastery and Fate and wrote in my journal desperately exploring the nature of things like compassion and fear. Quietly interrogating religious axioms led to deeper sociopolitical meditation. When is it too early, I pondered, to engage a black boy in conversation about the perils awaiting him? Whether a farm-raised progeny or product of an elite economic-class background, a black boy in 21st-century America is more likely to drop out of school, be harassed by police, or end up with a conviction record rather than earn a graduate degree, if he lives long enough. Eventually, I slept.