Book Review: “He Never Came Home: Interviews, Stories, and Essays from Daughters on Life Without Their Fathers” edited by Regina R. Robertson 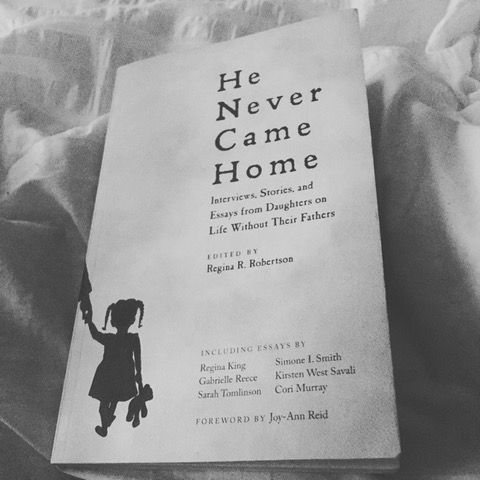 Each journey to single motherhood is unique. Some become Solo Moms by choice, others because of the end of a relationship, divorce, or death. No matter what our stories, there is one thread that connects us all: we are raising children without fathers in our homes or, for some, in our lives.

About a year ago, I began hearing about a book called He Never Came Home: Interviews, Stories, and Essays from Daughters on Life Without Their Fathers edited by Regina R. Robertson (Agate Publishing, 2017). Shortly thereafter, every time I turned on a television, there she was, interviewing about this anthology compiled by women who’ve experienced fatherlessness in some form or another—a topic that resonated with me, as I’d been raised without mine since the age of three.

But the interview that had me on my laptop adding this book to my cart was the one in which Robertson sat alongside actress Regina King as King discussed the necessity of setting aside any negative feelings she had about her ex-husband for their son’s sake. I wanted to know more, as I had long been trying to do the same. In her essay, King discusses her father staying in her life for some years following her parents’ divorce but eventually “drift[ing] away,” leaving Hal Williams, her popular TV father on the 1980s show 227, as the surrogate in her real life. King recognized the impact the discord between she and her ex-husband threatened to have on her son when she recalled, “Because of our issues, Ian was becoming the kid whose parents were so disconnected that they couldn’t even sit next to each other, let alone have a civilized conversation,” she said. “I had been that kid once, and it wasn’t fun.” Fortunately, she and her husband eventually were able to work on their relationship and become friends. That is the best-case scenario when divorce splits a family down the middle. But when friendship isn’t possible, the most fortunate of children continue to have their fathers in their lives. As King acknowledged, “[E]ven if we hadn’t come back together—as friends or parents—I never had any doubt about his role as a father. . . . Unfortunately, my father wasn’t that way.”

As I continued to pore over the stories, I realized my history had left me with a one-dimensional image of the absent father as simply one who abandoned his child. But the strong, authentic voices of the women sharing their own narratives and awakenings from life without fathers is the power of this book. It is unfailing in its raw recitation of the varied and layered experiences like that of Nisa Rashid, daughter of acclaimed writer asha bandele. Rashid has always shared a loving relationship with her father but has never enjoyed his consistent physical presence due to his incarceration, which started before she was born and ended with his deportation when she was nine years old. Rashid writes, “Growing up with a parent in prison was not an ideal situation, but as I get older, I understand how important it is to work with what you have. As thankful as I am to have such a wonderful father, I also know that it wasn’t easy for my mother to carry so much of the weight taking care of me.” And there are other stories, such as that of public relations and branding expert Tresa L. Sanders, whose father’s drug addiction hampered any chance of them sharing the relationship she fantasized about as a child. After his death, she realized, “He was a motherless and fatherless child, which is something I cannot imagine. He had to have felt an extreme amount of displacement as a child, and since he didn’t grow up with parents, how would he know how to be one?” Entertainment director for Essence magazine Cori Murray concludes about her father, whose drug abuse left her fatherless, “At his funeral, I thought our years of estrangement would keep me from memorializing him with a full heart, but that wasn’t the case. . . . Despite the choices he’d made, he did love me. . . . I looked up and felt as though all was forgiven.”

The strength of this anthology also lies in the self-aware revelations of some of the contributors who own their path in choosing male partners who mirrored the fathers who emotionally wounded them—yet another part of this book that struck me deeply because of my own relationships. As writer Danielle Rene explains, “I found men who were distant charmers and loved me just as he did—selfishly.” Similarly, award-winning actress Cindy M. Birch reveals, “Because I’ve always believed that my father loved me despite his abuse, selfishness, and absence, I believed that other men who exhibited similar traits could love me, too.”

After journeying through these women’s sobering accounts of separation, abandonment, rejection, and disillusionment, the final chapter explodes in beauty amidst loss as daughters recount the loving relationships they shared with their now-deceased fathers. I was captivated by the adoration of these women for the men who symbolized everything that daughters like me and editor Robertson (who says of her nonexistent relationship with her father, “He wasn’t there, ever, and I was not that girl”) never knew in our own: guidance, support, nurturing, protection, and unwavering love. And to these writers’ credit, the recollections of their days with their fathers did not evoke in me feelings of jealousy. Rather, my feelings drifted between awe and admiration for something beautiful to behold, as illustrated by writer Kirsten West Savali’s remembrance of her father: “I owe my feminism to my father. . . . He taught me to never depend on a man for my well-being and to always be self-sufficient. . . . I owe my life, my being, and my intersectional feminism to the greatest man I will ever know. . . .”

At the book’s end, I found myself thinking about the cherished gift daughters such as Savali and comedy writer and producer Jenny Lee had in their fathers despite losing them prematurely. As Lee expresses about her father, whom she lost to suicide: “I don’t feel sorry for my fatherless self as often as I did when I was in my twenties. When those feelings come up these days, there are a few questions I ask myself. Is it better to have a crappy father for a longer time or a good father for a shorter time?” Those tributes and others in this section of the book remind me of the exquisite love that exists between many daughters and fathers, something I’ve always disregarded because that has never been true for me.

This poignant and heartfelt work left me feeling deeply connected to and strengthened by the legions of other daughters forced to navigate this world without fathers. I now realize that for some fathers, it is easier to walk away from their children rather than sift through the ruins of their own fatherless childhoods. Perhaps that was true of my father. Perhaps this also explains the apathy I felt at 39 years old when I learned of his death via a Facebook message. My disconnection was the proxy for his decades of absence. I had long ago stopped missing what I never had.

What role did your father play in your upbringing?